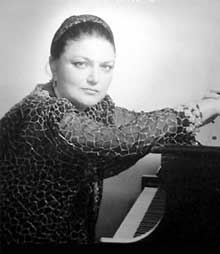 Oxana Yablonskaya, pianist, was born in the Soviet Union. Educated at the Moscow Conservatory, she joined the faculty upon graduating. Despite winning prizes and making a name for herself in Russia, the government didn’t allow her to go to competitions or accept concerts outside of the Soviet bloc. In 1975 she was fired from her teaching position and lost her performing career after applying for emigration to the United States. Leonard Bernstein and Stephen Sondheim were among the composers who successfully petitioned for her to emigrate. She has since lived in Germany, Italy, Switzerland, Spain, and the United States, where she taught at Juilliard for 25 years.

This past summer Oxana and I were guest artists at the International Music Festival in Burgos, Spain. We talked about subjects such as leaving Russia and the anti-Semitism she encountered. This conversation took place the morning of her solo recital.

At 74 she is still a heroic pianist with powerful hands. In her own words:

Fortunately, I can still do it because I’m 74 and will be 75 on the sixth of December. It looks like I’m born with this very big potential; my hands always working and I’m still very comfortable how I play.
I always ask my husband and the people who are close to me, please tell me if I change, because I don’t want to be ex-Oxana Yablonskaya. Often people play and they much slow down, and then it’s difficult to leave a stage. I always said, please tell me the truth. I don’t know how I will live without playing.
Oxana Yablonskaya plays Schubert-Liszt: Gretchen am Spinnrade, S. 558 n. 8

We talked about why she left Russia.

I left Russia because of my son, because I did not want him to live in this society. The director of the school, Central School, tell my sister and I have to change name for my son. Because it was an anti-Semitic country.
When we decided to leave Russia, almost everything stop in Central School. It was different teachers, and they tortured my son, because we want to emigrate, and they did not give us paper, and we were waiting.
It was difficult for my son, because I could stay at home, but he must go to school, and everything come to him, all negative. People were scared to show they understand why we’re leaving the country. They always tell something – oh, you’re going. You’re a traitor. They tell to a kid, 12 years old, 11 years old. When we left he was 14.
We left finally in ’77. It was difficult time. I did not have job, and my ex-husband didn’t want to go. Somebody recommended the professor Borovsky, a wonderful man, a wonderful cellist to teach my son. He loved Dmitry so much. Otherwise, in the Central School, he could not have more lessons, because people refused to do anything with him.

I was particularly interested in hearing the comparison between Oxana’s musical education in the Soviet Union and her son’s training in the United States.

After we came to America, he was in the Juilliard School, which was completely different – they play one piece. It’s more like free. If you’re in Russia, you have to play so many times in a concert, so many times for juries. It’s completely different kind of training.
You know how many minutes we listen at Juilliard? Twenty minutes, for doctorate. Otherwise 10 minutes. It was really joke. In Russia, you have few times in year you play, four times. Kids, you play half an hour, 40 minutes. You play few times Bach and classical sonatas all to the end.
I have one friend who told me he came to competition, and he played Beethoven sonata. He came to recapitulation and he stopped, because he said, they never play to the end. For 25 years [at Juilliard] I never heard anybody play one movement to the end. You always interrupt. Nobody has time. You don’t know what is the student like, maybe he has such a personality. Or maybe in the recapitulation, something fails.
I was 17 – the first time – when I played with orchestra at the Moscow Conservatory. After I play another competition, I won and I played with the orchestra. A few times, of course, they kick me out because I’m Jewish and it was all mish-mash. But finally, you went. If you’re very good, you go to competition outside of conservatory. In Russia if you have big prize and Russian management, you have already played concerts all your life. You don’t need to struggle – it wasn’t very difficult to go to competition.
Not like here; now you’re buying a ticket to go to the competition; then you have to go through hell, and play five, six different auditions. After trying out in Moscow, and, after, all Soviet Union, and after you play with orchestra and after they train you and you go by people who were always winning competitions, it’s a big difference in experience.
Another example. All my life I have the same like it was in Moscow. My door in my studio was open. I did not close it for the key, or kids did not wait outside of the door. All my students, even another student always came to my studio to listen. But I know many, even some very important musicians, they close the door. What is the secret you have to close the door to teach kids?
Another story. Every single concert I play, I go on piano and I play for them. Students have to imitate sound; of course if teacher is good, this is wonderful. If you have your personality, it will be your sound, and it will be you. It’s different blood circulation. My allegro is different from your allegro. We’re different, even if we read the same music.

On musical interpretation, I referenced my piano teacher, the renowned pianist Artur Balsam: When I brought a late Beethoven slow movement to him, he said, “You don’t have to try so hard. You will never be as great as Beethoven. Just play.”

Yes. It’s always an interesting conversation. For example, with Vladimir Viardo who is very interesting musician. When I talked to him, he said, we have to ‘put’ – I said no. I never want to show myself. If Beethoven, I play Beethoven. If Chopin, I play Chopin. I don’t know how it works, but you don’t need to change.
For example, if you see Beethoven manuscript, you see how he was crazy completely. How he cut, and changed notes. Why you have to change if he work on it? Please do what he wanted, because he worked, he changed it, he suffered.
For example, Jacob Lateiner was in jury; he was very big friend of mine. He always collect manuscript and was wonderful musician. He told me he had manuscript of Mozart and Mozart changed this passage every time. He want it! Why you have to change? Pay attention to this! Exactly like your teacher told you, you’re not better than Beethoven.

Oxana talked about being a mother in Mother Russia.

When I want to leave Russia it was big discussion. After I was alone with my son because my husband did not go with us when we came to America. But I never was single, because my sister was next to me, and my father was alive, and I married a few times, but this is another story. My son is closest person for me, and I’m so happy to play with him. We have like one blood circulation without ever discussing what it is.
No, it was the situation. You have to know what situation in Russia was, what was future for my son. My son, because he was Jewish, he could not maybe go to Moscow Conservatory, and immediately he will be in Afghanistan, to army. It was dangerous future. I know, for example, one woman, a dressmaker. She had genius son. His name was Ivan Finklestein, because father was look like Jewish. Mama was Russian, but in Russia it was different. The line was from father, and the name was father.
They took him to army. He was genius in mathematics, and everywhere he was winning first prize, international and national. He come back from army, he was sitting drooling. They try some medicine on him and on another boy, who was the same genius. When you see this once in your life, and in Russia army at that time – now I don’t know, because it was already 38 years ago. That time it was people more dying in the army than during the war. If somebody said to another an insult, they put the hole in the parachute. It was terrible.
I was so scared. I have one son, and you know how I love him. It’s more than anything in the world. I want to go with him in the free world. I want him to have freedom to decide what he will do in his life. We came to America, he was in school, Juilliard, from the beginning. And I told him, maybe you want to be lawyer or doctor. You know, it’s easy life if you’re educated. You have more money, more possibility. He said, “Mom, everything is boring for me besides music.” I said, “Okay, suffer. Have the music.”
I’m lucky. If I have anything in my life, I always said nothing can compare of this.
Oxana playing Rachmaninov Sonata with her son, Dmitry Yablonsky
(press the “play” arrow to listen)

Note:  Oxana and her son Dmitry Yablonsky will be performing at the Jewish Community Center in New York City on October 28, 2013, in a concert to raise funds for the JSO (Jerusalem Symphony Orchestra), where Dmitry is the conductor.

Gena Raps’ performances and recordings, particularly of Dvorak and Mozart for Arabesque and Naxos, have received international praise, “building with quiet majesty” (NY Times). Raps recorded the complete Mozart 4-hand repertoire with Artur Balsam and Mozart at 8 with Carol Wincenc for Naxos. She created and produced the CDs Play Bach! and Mother Goose and More with Julie Andrews and Peter Schickele. She was featured on the PBS series, “Women Alive!” Raps’ new recording of the late piano works of Brahms was released in the spring. She has toured internationally and has taught at the Juilliard School, Sarah Lawrence College and is on the faculty of the Mannes College of Music.
Next: Gail Postal’s Fantasy Life »
Home | Archive

3 thoughts on “A Musical Life From Moscow to New York”