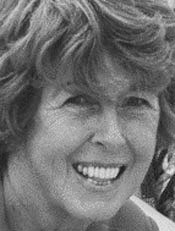 As I stood peeling potatoes at the kitchen sink, five-year-old Eyde pulled at my jeans. “Mommy, I want peels,” she begged. I hesitated, in spite of the child’s well-known Potato Skin Passion, because I hadn’t washed the potatoes before peeling them. But her continued pleas made me scrub a few for her, an awkward business when they’re off the potatoes. She thanked me in her deceptively innocent way and headed down the sidewalk with her prize.

A few minutes later I heard approaching laughter and a perfunctory rap on the door, and Fran Parris stepped into the house. I reached for cups and the coffee pot, asking what was so funny. Fran, who laughed easier than any sane person I ever knew, fell into a chair at the breakfast table and dried her streaming blue eyes on her jacket sleeve. “I just ran into Eyde on the sidewalk. I asked her why she was eating potato peels, and she said, ‘It’s the only thing my Mommy feeds me.’”

“Her tales are going get me in trouble one of these days,” I said. “Reverend Miller and I were working on the membership drive in the front room yesterday, and Eyde came in dancing something like the Bump and Grind with every scarf I own draped around her and not another stitch on.”

“Oh, man.” Fran gave a small laugh, but was obviously disappointed that it hadn’t been a more devastating event.

“That wasn’t the problem. Reverend Miller has four kids of his own, so he just smiled and asked why she was dressed and dancing like that. The little wart said, ‘Because my Mommy does it.’”

Fran sprayed coffee all over the table. I almost had it cleaned up when she was able to speak again. “So, do you?”

I threw the dishcloth at her. When I saw it splat right across her face, much wetter with coffee than I’d realized, I hit the back door at a run. Fran was only five feet tall, but fast and wiry, and I was weak with hysterics anyway, so in seconds I was on the lawn with her sitting on my stomach and pouring the last of her coffee into my hair. Eyde’s daddy used to say that Fran and I apart were fairly normal, but together we were nuts. He was kidding, but in retrospect he was pretty much right.

Fran let me up when the coffee was gone, and we went into the house, cleaned up, and got out the cribbage board. We played that game like fiends; chores went begging while we battled. Fran almost always beat me and celebrated like she’d won Wimbledon every time, but I kept playing anyhow.

Fran’s youngest child, Patrick, is a year older than Eyde, my eldest. Fran and I used to dream that they might someday make us in-laws. We realized such an eventuality could end up having a negative impact on our relationship, but we doubted it. Our unlikely friendship, we figured, would last forever.

Fran and Larry grew up in Maine, and they had been in El Paso only a month when we moved four houses down from them. She was thirty-two and I was twenty-one, she a northeastern city woman and I a small-town Texas girl. She was a crusty, tough, ex-BAM (Broad Ass Marine); I was gently-raised and remarkably naïve. She was a converted but enthusiastic Catholic; I was a hard-working, if unsure, Methodist. She smoked like a hot rod and drank like a camel. I had never smoked in my life, and one mixed drink would last me three hours. We often seemed to speak different languages—she got hysterical when I said “ice tray” because it sounded to her like “ass tray.”

Fran’s hair turned white during her twenties, which she claimed happened when her husband gave her an iron for her birthday. She was scrawny, had an overbite, and had no feel for clothes, makeup, or other girly things—and sometimes her beauty took my breath away. I loved her so fiercely that if she had said to me, Leave your family and escape with me to the mountains, I swear I would have gone.

Of course she never said such a thing, and forty years evaporated. During them, I had two more daughters, moved away, divorced, remarried, and Fran and Larry stayed put and raised their four children in the little house on Mojave Street. Always, whatever else was going on, we saw each other as often as we could.

After her husband died, Fran developed emphysema. She needed help with certain things, and so she moved to a small town on the Olympic Peninsula in Washington to live near her daughter, Janie. We did not see each other for over a year and kept in contact by telephoning and sending each other the most insulting greeting cards we could find.

Fran was proof-reading my first novel when I received a call from her. We talked about the multitude of errors she’d found, but I could tell something else was on her mind. Finally, she spit it out: “Hey, you rebel hick, if you want to see me before my grand exit, you better get up here right away.”

It did not come as a shock, the way such things are usually described, but as an icy stillness that froze me from the inside out and stopped every function of my being.

I couldn’t speak, but I managed a grunt into the phone to let her know I was still there. The thaw hurt worse than the freezing.

“Oh, come on. We knew this would happen fairly soon. I wouldn’t listen to anybody about the smoking.”

A thought finally crystallized. “How long?”

Somehow, I came up with the sort of words I knew she’d want from me. “Well, dammit, that’s just like you, crapping out on me before the book’s finished. No way can I get it done in two months!”

Her laughter ended with a weak cough. I told her I’d be there as soon as I could. And I thought, over and over: It’s not true. They’ll find out they’re wrong. She can’t go.

Eyde and I shared the driving all the way to northern Washington. Then, for four days, she mostly sat quietly and read or did little chores for Fran. Fran and I worked on my novel, reminisced a little, and played ferocious cribbage. Fran was sharp as ever and beat me just as badly. But when her mind was less stimulated, she often fell asleep, sometimes in mid-sentence. After a few minutes she’d jerk awake and laugh at herself.

Fran told Eyde about the funny things she’d said when she was tiny, and we all laughed at them again. “I guess what goes around comes around,” Eyde said. “My grandson Danny’s only three, but he has this big voice. In the Hilton coffee shop last week he dropped a fork on the floor and stood up in his seat yelling, ‘Fart! Fart! Fart!’” Eyde was about to tell us something else, but Fran got so hysterical that she had an awful coughing fit.

And then it was time go back to El Paso. Fran and I said our goodbyes with all the digs and jokes we could work in, in spite of the fact that I had to say mine around a solid lump of grief in my throat. She let me hold her in my arms for a few seconds, a rarity since she was anything but touchy-feely.

Once in the car, hoping to see Fran at the living room window, I looked back. She had dragged her oxygen tank onto the porch and was standing under the new wind chimes Eyde had hung for her. She flashed her wide smile and waved goodbye. She was old, frail, disheveled, and, in some way I cannot describe, majestic, powerful, a brave woman facing eternity.

And suddenly I knew what Fran had already figured out: It’s all right to die.

Eyde drove us away, and I watched, waving like a child, till Fran turned aside. Before she went in the house, she gave the wind chimes a thump and stood a few moments, head cocked, listening. I know she heard something more than their tinkling; I could almost hear it myself.

It’s an experience like none other to know you’re seeing a loved one for the last time, even though she stands before you vitally alive. My heart swelled with the awesome gift.

I didn’t talk to Fran again. We both wanted, I believe, to keep that time of parting undisturbed inside us. Ten days later I got the call from Janie. It had been sudden, after all. The day before Fran died, she had finished proofing the tenth chapter of my book, covering it with red marks. She had asked Janie to mail it back to me, and told her with a laugh, “I’ll swear, that rebel hick won’t ever learn a damn thing.”

L. J. Reed retired from her job in El Paso and moved with her husband to Port Aransas, Texas, seven years ago. Since then she has divided her time between writing and painting. She has published short pieces in Woman's World, Reader's Digest, and two Thin Threads collections, as well as winning or placing in several competitions.
Next: Change and All That »
Home | Archive