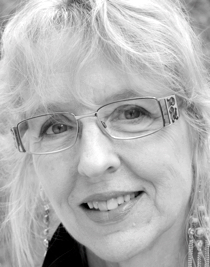 Sometimes we are permitted to return to a meadow comprised of a mature poet’s earliest poems: before the poet’s voice has fully flowered in verse, but when all that the poet would go on to become is nascent as possibility, potent and potential, in bud. With these selected poems by Cynthia Huntington, drawn from her debut collection, The Fish-Wife, we have a chance to revisit, reconsider, return to tarry in the meadow of her early lyric mode.

The poems featured here are grounded in location, both urban and rural. They unfold in beautiful, high lyricism, but are permeated with life’s gritty specificity. Trucks “growl” from the streets of Manhattan. A deer fleeing dogs in winter woods runs onto a lake and falls through the ice, her body not found until spring thaw. The voice of these poems comes full arc to splendid fruition in the recent collection, the magisterial, New England-based Terra Nova. With this book, Huntington, a former Poet Laureate of New Hampshire, takes her place among the great poets writing “New Englandly” (the term is Dickinson’s), which includes Frost’s dialogue poems and Charles Olson’s Maximus series. Huntington returns to the deeply locational lyric of her earliest poetry, although the later poems are expanded by lived experience, inflected by her mid-career explorations in the genres of personal and persona poems.

Her voice-centered character studies from the middle period have become signature works. The best-known poems in the National Book Award finalist volume, Heavenly Bodies, such as the audacious portrait of liberated female sexuality, “Shot Up in the Sexual Revolution: The True Adventures of Suzy Creamcheese,” and the candid personal lyrics in the Levis Prize-winning The Radiant, confront cultural change and devastating personal loss. The poems are by turn witty and bold, but they are also unflinching in their consideration of “things as they are” (as another New England-based poet, from Huntington’s own home state, Pennsylvania, Wallace Stevens, famously put it).

We find in the poems that follow a radiantly lucid regard of “Nothing that is not there and the nothing that is.” The first poem opens with a scene in which that most quintessential of romantic images, the full moon, is rising – marvelously happenstance to the speaker – between “the towers of the World Trade Center.” Rereading this poem here, “The Desire to Shine Without Burning,” we are invited to consider a beautiful image which now fatefully memorializes an American disaster at the dawning of the 21stcentury. In that long-ago world, however, as Huntington intuits, beauty harbors future ruin. The moon beams down on a river “shining / with a mineral brilliance, when stars float / among the spilled bodies of oil.”

“The Holiday Suicides,” another poem startling for its sangfroid consideration of existential despair, breezily observes of the suicidal around the holidays, “Everything / is ready for them”: from the “weapons” found in “drugstores and kitchen drawers” to do themselves in, to the extra volunteers the crisis centers train for the Christmas rush. The woods in Huntington’s early poems are lovely, dark, and deep as the snow that “cover[s] / the dirty and broken things,” which spring will reveal. These poems are not “artifacts” from a more innocent, nostalgia-laced past, sealed off from time’s passage like so many Grecian urns. I hope you will find, as I have, that they’re fresh, alive with the still-urgent news from an alert and resilient survivor. I also hope that they’ll send you, as they have me, again to the later collections, to see them with new eyes.

Cynthia Hogue  has published fourteen books, including nine poetry collections, most recently Revenance (2014) and In June the Labyrinth (2017), both with Red Hen Press. Her co-translation, from the French of Nathalie Quintane, is Joan Darc (La Presse, 2018). Among her honors are a Fulbright and two NEA Fellowships. Hogue directed the Stadler Center for Poetry at Bucknell University from 1995-2003, after which she assumed the inaugural Marshall Chair in Poetry at Arizona State University. She is Emerita Professor of English and lives in Tucson.
Next: Synesthesia: The Involuntary Joining of the Senses »
Home | Archive