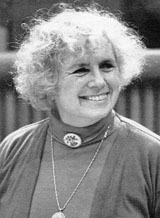 Editor’s Note: “One Day I Decided,”“People in My Family,” “The Boy His Mother,”“Hand-Me-Downs,”“Here,”“Reading the Newspapers at the Village Store,”“Words,”“The Poet’s Occasional Alternative,”“When I Was Asked How I Could Leave Vermont in the Middle of October,” and “Walking in the Woods” are from Begin Again: Collected Poems by Grace Paley. Copyright © 2000 by Grace Paley. Reprinted by permission from Farrar, Straus and Giroux, LLC. We are very grateful to Grace Paley and Farrar, Straus and Giroux for graciously letting us include these poems here.

Caution: Readers are warned that this work is protected under copyright laws and downloading is strictly prohibited. The right to reproduce or transfer the work via any medium must be secured with Farrar, Straus and Giroux, LLC.

One Day I Decided

then I looked up at the sky
which is wide

low on my left

I placed my hand against it

my whole hand
which is broad from pinky to thumb

I bared my teeth to it

my teeth
are strong

secure on their gold posts

I held my breath

I stood on my toes

then I was taller

still the clouds sailed
through me

People in My Family

The eighty-two-year-old people grew up

this is what they knew

That’s why when they speak to the child
they say

they went to prison

they went into exile

When they speak to the grandchild
they say

there will be revolution

then there will be revolution

then the earth itself

will turn and turn and cry out

have been made sick

must flower and save it

oh his ribs
may crack with happiness

he runs dangerously
out into the street

he turns
wants to look up into her face

she
laughs and follows

but there’s no help

his eyes
are tipped with tears

he bows his head

kneels
before the other

love-threaded
as he has been

I have stopped reading to look at him

I take
his hand

I am shawled in my own somewhat
wrinkled still serviceable skin

No one knows what to do with these
hand-me-downs

love them I suppose

a woman
in the old style

I tell my grandson
run over to your grandpa

ask him
to sit beside me for a minute

Reading the Newspapers at the Village Store

the hills rolled over
in mist

the tight wet elbows of
the valley

mocking my pessimism in
this world’s year

and one man spoke

what nature doesn’t do
to those poor countries in the

places where those people live
and look at this

always warring on each other
murdering and maiming one

the other man replied

it was in the morning paper
a couple of months ago

caught them morning and
night whether the sun was

blessing or burning the green skin
off their farms outside

those people
in their dangerous

above them the sun as usual
stood still

What has happened?
language eludes me
the nice specifying
words of my life fail
when I call

Another friend says
No no

perhaps
you are only meant to
speak more plainly

a poem would have some
distance to go

days and weeks and
much crumpled paper

many friends
will say

why in the world did you
make only one

this does not happen with poems

I do not
want to wait a week

a
generation for the right
consumer to come along

drop into
another latitude where it wasn’t so
well known

there it is now

as you live that
loyal countryside

trembling
toward its long winter

this aging body knows
it can’t be borne

Walking in the Woods

black with the delicious
hospitality of rot to the
littlest creatures

the tree not really dying

green head high
above the other leaf-crowded
trees

a terrible stretch to sun
just to stay alive

but if you’ve
liked life

(Persimmon Tree was honored to publish this section of Grace Paley’s poems two months before her death in August 2007.)

Grace Paley is one of the most beloved of American writers. Acclaimed for her short stories, beginning with the collection Little Disturbances of Man (1959), she also has produced several collections of poetry, including Leaning Forward: Poems (1985), New and Collected Poems (1992), and Begin Again: Collected Poems (2001). She has taught at Sarah Lawrence College, City College of New York, Columbia University, and Syracuse University, and she has received many awards for her contribution to literature. Committed to political activism for decades, she regards herself as a "somewhat combative pacifist and cooperative anarchist."
Next: My Pal Paley »
Home | Archive