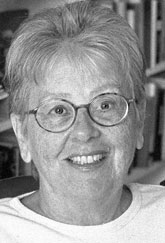 Slipping into my eighth decade feels like watching reruns or remakes—of styles in clothing and politicians, of economic booms and busts, of sex scandals and wars—tacky imitations of the original versions, which were nothing to celebrate. But some reruns are an interesting mix of worse and better—as in the case of books. I don’t mean the quality of writing (let’s not go there!), but access to books.

When I was a child in San Francisco, I never saw a bookstore. I knew a store called Brentano’s existed within an elegant department store on the upscale north side of Market Street, where rich people bought hardbound books for as much as $2 to $4—enough to feed our family for a week. At school, textbooks were issued, carefully covered with butcher paper, protected with our lives, and returned at the end of the term. The only books owned at my home were a dictionary and a Complete Shakespeare (in unreadable tiny type on tissue thin paper) each obtained by sending a dollar bill with a White King box top. (Today it seems wonderful to me that the literary aspirations of working class immigrants were considered strong enough to use in promoting laundry soap.)

My sole source of books was the San Francisco Public Library, Mission Branch, which became my church, where I worshipped almost daily. Understand, now: there were no paperback books. Not in drugstores near the magazines and comic books, not at the local Safeway (which wasn’t much bigger than the mom-and-pop on the corner in those days). Nowhere. Non-existent.

Paperback books first appeared along with returning veterans of World War II. They were G. I. issue—thin, oblong reprints on newsprint paper of mysteries or American classics, frayed and ragged from being carried in duffle bags. They must have inspired the 4 x 7 inch “pocketbooks,” average price a quarter, that began to appear on wire racks in drugstores. Printed on cheap paper, they tended to turn brown and fall apart after the first or second reading. Their lurid covers, usually featuring a semi-nude woman, might open upon a formulaic detective story (cheap writer) orWuthering Heights (an even cheaper, dead writer, out of copyright).

Paperback books were held in contempt until the mid-1950s, when creative booksellers transcended the snobs and opened stores (like City Lights, Keplers, and Cody’s Books in the Bay Area) that sold and sometimes even published paperbacks—some of which might have been called obscene (Ginsburg’s Howl), but never trashy. Publishers soon saw potential profit in printing high quality books in paperback, like classics in the Signet editions. What became known as the Paperback Revolution meant that anyone could afford to build a private, if perishable, library. Or carry a book of poems in her purse. Or pass on a discovery to someone without worrying about loss—it could always been cheaply replaced. Or require students to buy a dozen classics for a lit class. Books long out of print and discarded from libraries reappeared in paperback. It’s hard to convey how exciting this was, or how avidly I acquired these cheap gems.

Along with the Paperback Revolution came used bookstores all over, even in the Mission District. The used bookstores also carried hardback remainders (from overly optimistic printings), often at $1, plus books they purchased from customers for cash or trade. Such stores might have long been common in New York, but in my 1950s and 1960s Bay Area world, they suddenly appeared wherever rents were low (and slowly disappeared as rents rose.)

Publishers adjusted, made changes. My first novel (1972), for instance, came out in the “proper” way, first in hardback, later in one of those pulpy, luridly-covered “mass” paperbacks (which, if they didn’t sell, were simply tossed by the retailer, who ripped off the cover and sent it back to the publisher for refund). My second (1976) was the first novel Random House had ever published simultaneously in hardback and “quality” paperback, basically the same printing, same paper, same cover art on a soft cover instead of dust jacket on cloth, upping the cost of the paperback, which still remained about half the price of the clothbound version.

Suddenly seeing books as a viable sales product, corporate chain bookstores appeared—big (Crown, Waldenbooks), then bigger (Barnes and Noble, Borders). The Barnes and Noble that sprang up in the mall off the freeway near a rural town might be the first bookstore that many Americans had ever seen.

Yet it turns out that the corporate view of the bookstores as a profitable business was naive; owners of independent bookstores always knew survival was a daily struggle—for obvious reasons. What other retail outlet sells products that are, each single one, different from every other one, and, furthermore, must maintain selected inventory while daily adding new, different products created at the rate of tens of thousands every year? None. What manufacturer of any product allows a retailer to return quite satisfactory but unsold items for full credit? None, except publishers. (The returns policy was a “temporary” emergency expedient begun during the Great Depression. The emergency, it would seem, has never ended.)

Yet, throughout the 1970s and 1980s, bookstores, corporate and independent, did pretty well. Until the internet. I’m not referring to the fact that the internet has changed most people’s reading habits (which it has). I mean that ordering a book online, any book, new or used, from a source 10 or 10,000 miles away, is so much easier than locating it in a bookstore. Online ordering is a blessing that may be the final straw sinking bookstores, big and small, here and there, every day.

What are we losing? Not author readings and signings, which can and do continue in schools, churches, and other public venues. What we are losing are the casual encounters with other readers browsing, say, the philosophy section, or the casual conversations with some of the fascinating people who work in bookstores.

So, for browsing, it may be back to the library, which is where I started. But now the original version feels inferior to the more recent one—because in bookstores I could sniff and taste an abundance of new books, in skimpy supply for browsing at the public library. Furthermore, today’s library is no longer my church, ruled by those fierce priestesses hissing “Shhhh!” The staff may be the noisiest people there. And those pesky computers keep elbowing aside bookshelves and chairs.

Are they a disaster or a marvelous trade-off or both? I read confusing reports of Google’s plan to digitize books. This could mean, we’re told, that even tiny, small-town libraries will soon have access to a world library almost beyond imagination—wonderful for readers. It could erode copyright—not so wonderful for writers. Next might be the same access through a personal computer at home. Eventually any choice from this universal library might even be delivered to any reader at the push of a button on a hand-held screen. Somehow, that final, wonderful innovation leaves me cold.

Whatever happens, it’s unlikely that I’ll push many years past eighty, so I can relax and continue to read ink and smell glue on bound paper I can touch. That’s a comfort that will help me to make my departure with no more regret than we felt in the old movie houses of my childhood, when we stood up, saying, “This is where I came in.”

Dorothy Bryant began writing in 1960 and has since published a dozen books of fiction and nonfiction, including Ella Price’s Journal; Writing a Novel; A Day in San Francisco; Myths to Lie By; and Anita, Anita. Her many plays have been performed in the Bay Area and beyond. In 2009 she was the recipient of the Northern California Book Reviewers’ Fred Cody Award, a lifetime achievement award honoring a Northern California literary figure with an important body of work.
Next: Tiptoeing Toward Seventy »
Home | Archive