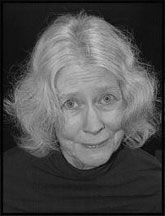 “America’s most fiercely honest poet,” Joel Brouwer calls Alicia Ostriker. Street-smart and straight-talking, Ostriker writes poems that are Whitmanesque in their embrace of gritty life, the body’s heavy-breathing, sweaty, messy urgencies. Yet they’re also Dickinsonian in their economy, wit, and “white heat.” Whether writing about the anguish of childbirth in the midst of the Vietnam War or the pain of separating from one’s children as they grow to adulthood, whether writing about the realities of long-term marriage or the comedies and tragedies of teaching or the challenges of aging, Alicia Ostriker grapples the biggest subjects (birth, death, the sacred) with humor, self-knowledge, increasing wisdom, and courage.

“Write for your own sake,” she says in a poem called “The Class” (The Crack in Everything, 1996). “Write for the sake of the silenced. / Write what makes you afraid to write.” In her poems and her prose, Alicia tackles subjects fearlessly, often in the questioning, revisionary spirit of midrash. This is a writer who brings an intellectual, emotional, and spiritual ferocity to everything she does.

One of many Ostriker poems that has never left me is from Green Age (1989), “A Young Woman, a Tree,” which compares the stages of a woman’s life with those of a maple. The poem begins:

The life spills over, some days.
She cannot be at rest,
Wishes she could explode

Like that red tree—
The one that bursts into fire
All this week.

As the poem continues, it shows the woman wishing she could

And it ends with the tree’s letting itself

And stubborn hands
Under the shops, the streets,
The subways, the granite,

The sewage pipes’
Cold slime,
As deep as that.

Ostriker’s poetry has been penetrating surfaces for decades, cracking open our carefully protected facades and exposing the realities under our buried “sewage pipes.” She has published twelve collections of poems, two of which were finalists for the National Book Award. She is the author of two pathbreaking books on women’s poetry: Writing Like a Woman (1983) and Stealing the Language (1986). She has published three books on the Bible. She has received awards from the NEA, the Poetry Society of America, the San Francisco State Poetry Center, The Judah L. Magnes Museum, the New Jersey Arts Council, the Rockefeller Foundation, and the Guggenheim Foundation and her poems and essays have been translated into French, German, Italian, Chinese, Japanese, Hebrew, and Arabic.

But although she is one of our most acclaimed poets and critics, Alicia Ostriker remains humble and gracious, one of the most open, compassionate, life-loving people I know. When she first came to San Antonio (where I teach), she had only one request, one that caught me by surprise: conjunto music. We hit every club in town. That was after Alicia had visited our graduate poetry workshop, which met that night at an old ice house where in the afternoon you can find most of our anthropology faculty and any number of Hell’s Angels. Alicia wielded a pool cue right along with the guys. During the workshop, while we all sat around two pulled-together tables, my students hung on her words as if they were lifelines.

And a lifeline Alicia has been to many of us. She has for me, ever since I first met her during the seventies when she came as a guest to one of Sandra Gilbert’s workshops at UC Davis, where I was a graduate student. Why should I have been surprised that, as I was making omelets during Alicia’s first visit to my home, she asked, “What can I do?” and in two minutes was cutting up tomatoes and green peppers for our eggs. Poets like Alicia are rare. Never afraid to crack open a shell, she walks through life wide open to its pain, its ecstasy, love, anger, humor, terror, despair, and hope. In Dancing at the Devil’s Party, she writes that poetry “can tear at the heart with its claws, make the neural nets shiver.” Her own poems do just that.

Wendy Barker’s fifth book of poetry is Nothing Between Us, a novel in prose poems that was runner-up for the Del Sol Prize and was published by Del Sol Press in 2009. Her third chapbook, Things of the Weather, was also published in 2009 by Pudding House Press. Her poems have appeared in many magazines, including Poetry, Georgia Review, Southern Review, and Gettysburg Review. She has received NEA and Rockefeller fellowships, and is Poet-in-Residence and a professor of English at the University of Texas at San Antonio.
Next: Lives of Confinement: A Conversation about Women in Prison »
Home | Archive