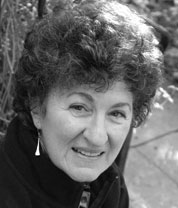 I’ve never met Kay Ryan, never been to a reading of hers, yet I feel as if we have been carrying on a conversation. Which is no doubt what she intended; her poems are shaped to provoke the reader.

Knotty, mischievous, filled with puns and wordplay, Ryan’s poems think their way through some very large subjects: art, love, loss, aging, divestment, death. They do so in very tight spaces—the poems are often no more than twenty lines, with as few as two or three words per line. That puts a lot of pressure on every word. “If your line is about three words long, nearly every word is on one edge or the other,” Ryan said in an interview. “You can’t hide anything.” Her emphatic use of line breaks, alliteration, and internal rhyme can make for a bumpy ride, but that’s an essential part of the experience. She wants us to slow down, to pause, to contemplate.

What Ryan gets us to think about, often, is the very strangeness of our experience. In “A Plain Ordinary Steel Needle Can Float on Pure Water” (the title comes from Ripley’s Believe It or Not) we see a steel needle floating “serene / on water as if lying on a pillow.” The comparison is strange, like John Donne’s conceit of “stiff twin compasses” to describe the relationship between two lovers—strange, yet surprisingly apt. The water and needle accommodate each other to make the improbable possible, the way people in close relationships “[modify] each other’s qualities / somewhat” (the adverbial twist is characteristic in its precision). Ryan concludes: “we almost forget the oddity / of that,” a motif that echoes throughout her oeuvre.

It is heard again in “Niagara River,” a distinctly American take on Heraclitus. Here Ryan confronts us with the way we course along in our lives from day to day, oblivious to our final destination. She stops just short of saying where the Niagara River is headed (“it is hard to remember”), prodding us to supply the missing image. The insight that comes at the end of the poem registers like a sudden plunge into recognition.

An analytical intelligence informs Ryan’s definition poems with their quasi-scientific language: “Doubt uses albumen / at twice the rate of work”; hope is “the isotope / of going on.”

There is strong emotion too, recollected under the pressure of thought. Ryan has a gift for the the pithy phrase: “So much freshness / to unlearn,” she writes in “Green Behind the Ears,” a poignant insight into the cost of growing up.

“Spiderweb” offers a zoom shot of the spider at work. The muscular verbs (“hauling,” “hitching,” “winching up”), a bit comic in effect, give us the spider’s perspective on spinning a web and Ryan’s perspective on her art. The poem ends with a statement about the difficulty of living. That kind of move is unfashionable today, as literary critics will attest, but Ryan clearly has little use for poetic fashions.

After writing for years without much notice (she self-published her first book), Ryan began to win major awards, among them a Guggenheim and the Ruth Lilly Prize; she was the United States Poet Laureate from 2008-2010. Just this year, she won the Pulitzer Prize for The Best of It. “Lime Light” offers a wry comment on her own celebrity as well as on our celebrity culture: “One can’t work by lime light.” The “baleful / glow against / the kitchen table” cast by a bowl of limes is just enough to reveal the difference between Po Biz and the serious business of writing poems.

The illumination that matters for Ryan is “the light of interiors.” In the poem of that title, one of my favorites, she analyzes the way light is admitted, filtered, and imperceptibly altered in a room or a mind. That meditation, with its quietly lyrical turn at the end, celebrates the rich texture of the inner life, Ryan’s source and her most absorbing subject.

Chana Bloch, Persimmon Tree poetry editor, is a poet, translator, scholar, and teacher. She is the author of four books of poems (most recently, Blood Honey); six books of translation from Hebrew poetry, ancient and contemporary (most recently, Hovering at a Low Altitude: The Collected Poetry of Dahlia Ravikovitch); and a critical study of George Herbert. Bloch is Professor Emerita of English Literature and Creative Writing at Mills College, where she taught for many years and directed the Creative Writing Program. Information about her books, and audio clips of poems, may be found on her website, http://www.chanabloch.com.
Next: Red Shoes and Milk Baths »
Home | Archive

One thought on “Believe It or Not: Kay Ryan’s Poems”