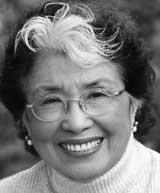 “I don’t understand how a mother could leave a newborn baby and entrust her to strangers for three-and-a-half years!” As a defiant teenager, I knew that this would bring my stern mother to her knees.

“But there was nothing else we could do,” she always replied.

Each time my mother told the story of what happened so long ago, there was a look of anguish in her eyes, and she would say, “I simply had to leave both you and Seiichi in Japan.” Tosh, her second son who was 13 months old when I was born, became very ill a few weeks after my birth, she told me, and our uncle, the country doctor in Mushirouchi, said his condition was “beyond his abilities.” Mother should take him to Osaka for diagnosis and treatment by brain specialists. She left Seiichi, then two-and-a-half years old, with our grandparents in Mushirouchi and me (three weeks old) with a nursing mother, a woman who had recently given birth to a baby girl, in a nearby town.

The diagnosis in Osaka was dire: encephalitis, a serious brain disease. My mother immediately boarded a ship to America for treatment by American doctors. Tosh’s convalescence, she said, was long. Finally, after three years, my parents offered to pay the fare of a honeymooning couple to Japan if they would bring my brother and me back to join the family.

The young couple first picked me up from my foster parents and then went to my grandparents’ home to get Seiichi. But by that time, our grandmother had become so attached to him that she refused to hand him over; she was not about to give him to a pair of strangers, she said (although our father had written to her about the plan.) The couple returned with only me at that time, and Seiichi was left with my grandparents until he was eight years old.

The story of my introduction to my family changed through the years. From “tottemo erakatta” (those were difficult times) to a “funny story” my mother told to amuse her friends: “I was so happy to have a girl after two sons. She was a pretty baby, light-skinned with delicate features when she was born. Imagine my shock to see this dark-skinned, homely child coming down the unsteady steps of the gangplank in the arms of a young man with his wife behind him.” She was describing her impression of me as we arrived in Seattle from Japan, a two-week trip across the Pacific Ocean.

“How is it possible that the pretty little baby I left in Japan turned into this inaka mono (country bumpkin)? Perhaps the honeymooning couple made a mistake and brought the wrong child? As soon as we got into the car, I checked to see if she had a mole on her left temple. She did. Then I pulled her kimono down on her left shoulder to see if she had a slight discoloraton, a birthmark. She did. There was nothing I could do but accept the fact that this child was indeed our Mitsuye.”

Then Mother would become even more animated telling the next part of the story: She and my father worried that perhaps I was a deaf-mute. I didn’t speak a word upon meeting them and was silent in the car during our trip home. She had decided she had to take me home properly dressed, at least. They stopped at the dry goods store in Japantown in Seattle and bought a dress to replace the rough cotton kimono I was wearing. They then carried me to the shoe department to replace my geta, the wooden clogs on my feet. It was then that I finally opened my mouth.

“Mah, akireta (what a shock)!” Mother would say, “She said as clear as a bell:Wataki wa akagato ga yoka (I want red ones). Such coarse, countrified language out of the mouth of this little child!”

Here Mother would burst into peals of laughter. “Imagine,” she would say laughing, “Red shoes!”

My mother had a strong need to adhere to and pass down to her children (my three brothers and me) the traditions of her genteel class upbringing in Japan: Behave and speak with proper respect to all persons, for you will always be judged by your language and manners. And always show a “good face” to the outside world. I understood early that these rules applied somewhat loosely for boys because my brothers were given wider berth than I and seemed to have greater freedom.

Obviously I did not live up to her standards for a properly brought-up girl when I arrived in Seattle to join the family. She was determined to smooth out the rough edges of this country bumpkin who had no manners at all. Under her constant vigilance, I soon learned to stand with my feet together, sit with my knees closed at all times, and take small steps when walking without swinging my arms.

However, correcting my speech took a little longer. I spoke with a coarse southern country dialect I had learned from my hired caretakers in Fukuoka. “No, Mitsuye, notwataki. Say watashi.” I was interrupted so often that I soon stopped speaking altogether. Among Mother’s circle of women friends, this was a source of pride to her when we visited them. I was the quiet, shy little girl who always sat demurely by her side, in contrast to her friends’ noisy Americanized little girls who ran around the house with the boys, shouting like tomboys.

Then there was my skin color. Dark skin seemed unclean, and to Mother this must have seemed like an affront. Introducing me to new friends, she would say, “Iroga kuroi keredo, iiko desu” (She is dark, but she’s a good child). She had read somewhere that milk would help bleach the dark pigment of one’s skin. Milk baths in the kitchen became a daily ritual. I sat on the chair where she put me and watched her as she set about preparing for my morning bath. She would set the metal laundry tub in the middle of the kitchen floor, fill three large pots with water, and set them on the gas stove. While the water was heating up, she would clear the kitchen table and wash the breakfast dishes. Soon the boiling water rattled the pot covers, a signal for her to turn the gas off and pour the hot water into the tub. She would then add a pot of cold water into the tub, check the temperature, pour more cold water, check the temperature again, and so on until she was satisfied. Finally she would get a quart of milk out of the ice box and pour the whole contents into the tub. Then she would undress me and set me down into the warm, milky water. She would pour the water over my shoulders with a cup and wipe my face with a soft washcloth while chanting softly “Iro shiroi, iro shiroi (color white, color white).”

The milk baths were an entirely pleasant experience for me, but I didn’t enjoy what followed the milk baths. To further ensure the lightening of my skin, she would cut a fresh lemon in half and rub it on my arms and my face. The lemon on my skin, still warm from the bath, stung, but I bore the treatment stoically and without complaint.

I don’t remember how long this ritual lasted, perhaps until I was about to enter kindergarten when Mother must have realized that the treatment was not working. She then decided to dress me up prettily, perhaps to make up for my darkness. She had a dress maker make several print dresses in different bright colors from the same pattern. I was always sent out into the world in a neatly ironed dress with matching socks, patent leather shoes, and a small straw hat to shield my face from the sun, though there were very few sunny days in Seattle. When I became a teenager, she added pairs of white gloves to keep my hands protected from the sun and parasols, which she insisted I carry at all times. I routinely “lost” the gloves and the parasols, but she repeatedly replaced them without comment.

Soon after I entered high school, Mother lost control of her well-behaved, well-groomed daughter, for our neighborhood area was redistricted and I was bussed to a school out of our district. That meant I got up very early in the morning to catch the school bus, and because of my involvement in the debate team, literary magazine staff, and other after-school activities, I did not return home until late afternoon.

Between those early years and now, six decades have passed. There was World War II; the removal of our family along with all persons of Japanese descent to the desert concentration camp in Minidoka, Idaho; the dispersal of our family as my brothers and I each left camp and went our separate ways; and the new families we established in different parts of the country. But my mother’s adherence to tradition never wavered. She kept our families in touch with each other by making the rounds of our homes for decades after our father’s death. She tried (not always succeeding) to instill proper manners, clean habits, and respectful speech to her grandchildren. (My older daughter, a child with darker skin than her siblings and cousins, to this day remembers Mother rubbing lemon juice on her arms and face.) Throughout the years, her old world ways became a conversation piece as a form of amusement for us, which she bore good-naturedly.

When Mother came to live with us again—she was in her nineties—it was my turn to fuss over her, though she kept herself so well-groomed that she didn’t need much fussing over. One of my friends remarked, “Mitsu, I dropped over at your house this afternoon and your mother was vacuuming the living room floor all dressed up, in silk stockings, her hair neatly coifed!”

One day she said to me as we sat at the kitchen table drinking tea, “You take such good care of me. You are the best daughter sekai juni (in the whole world).” I might have returned the compliment, milk baths notwithstanding.

Postscript: My mother, Hideko Yasutake, died after a short illness in 1997, just before her 98th birthday.

Mitsuye Yamada’s writings focus on her Japanese American heritage and women’s and human rights. Her first book of poems was published by the Shameless Hussy Press (1976). Her second book, Desert Run: Poems and Stories, was published by Kitchen Table Women of Color Press (1988). The two books were published together in Camp Notes and Other Writings, Rutgers University Press (1988). She is now 86 years old and enjoys her four grown children and six grandchildren. She continues to play the piano to keep her brain from atrophying.
Next: Finding Charles »
Home | Archive