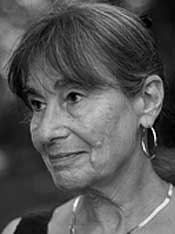 What strikes me most about Marilyn Hacker’s poetry is that it’s a poetry of passionate engagement. Emotionally open to others and to the Other, politically engaged, reaching out beyond poetic cliques to the “one life within us and abroad,” as Shelley says. She’s been a great teacher and a great editor and discoverer of fresh talent for the Kenyon Review — but mostly she’s been a poet.

Marilyn’s poetry embodies a tension between a highly artful formalism and the instincts of a rule-breaker. Yes, she writes in meter and takes pleasure in the exigencies of difficult forms (our sample here includes a rune, a crown of sonnets, stanzas of 3/7/7/7-syllable line-lengths, a ghazal, a sestina, sapphics, the crackling off-rhymes of “Crepuscule with Muriel,” and the brilliant and touching “Glose” riffing on lines of Akhmatova). But there is nothing academic or conventional about her content. Like John Donne, she writes conversationally, roughly rather than smoothly, as a mode of resistance to authority and an expression of pent-up energy. Her early work was praised for its bold representations of sexuality, and it was once customary for critics to remark how remarkable it was that Marilyn could write about sex in sonnets and sestinas.

It is remarkable; but it’s just a beginning. Marilyn’s insistence on writing inside the box and outside the box at the same time has let her write about food, about bohemian life in New York and Paris, and later on, about being a Jew, about having a mastectomy, about lesbianism, about friendship, motherhood, youth and age, the ethnic makeup of the streets of Paris, the horror of our country’s wars. Her tone is somehow both casual and intense, and always brimming with intelligence.

Two important strands in Marilyn’s work are anger and love. There’s a tight, almost-perfectly-controlled anger at the world’s evil, a kind of drone underneath the melody of her sentences, so you get lines like these:

And there’s also a deep appetite for human connectedness, an amazing generosity. Hacker has written dozens of poems honoring the lives of others. In recent years, living in Paris, she has been learning Arabic and translating Francophone poets from the Mahgreb. Her tribute to the Palestinian poet Mahmoud Darwish is a perfect instance of her boundary breaking: the “braid of garlic” knows no border, the facts of illness, surgery, mortality, know neither border nor gender: they are ours. But Hacker’s cosmopolitanism and internationalism are not merely theoretical or ideological. She can create a conversation among old Jewish men in a café in Paris that could easily be a café on upper Broadway, and make you feel you are at the next table overhearing it. She can evoke for you a house that has just been demolished, or the birches of Akhmatova’s privileged girlhood, with equal vividness. Underneath every reaching-out in Hacker’s poems is the flow of the erotic, as she states so finely in the ghazal whose endword and addressee is “desire:”

Without you, there is no poet, only some nameless hacklacking a voice without your voice to speak desire.

Alicia Ostriker has published fourteen volumes of poetry, most recently No Heaven (2005); The Book of Seventy (2009); and The Book of Life: Selected Jewish Poems 1979-2011 (2012). She has been a National Book Award finalist twice, and has received the William Carlos Williams Prize, the San Francisco Poetry Center Award, the Paterson Poetry Prize, and a National Jewish Book Council Award, among others. She teaches in the Drew University low-residency Poetry MFA program.
Next: Interview: Toshi-Aline Ota Seeger »
Home | Archive