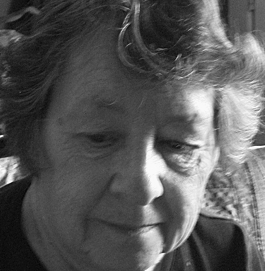 Margaret had cut out advertisements for all the estate and garage sales in the area, pasted them onto a piece of white copy paper, looked up directions to each place, and written those instructions on the paper next to the ads. No one could read those instructions except herself as her writing was so terrible, a bit shaky. She had then numbered the ads in order of which ones she would visit first, second, etc. She’d gone to the bank and withdrawn cash. She was ready.

The alarm went off and she stabbed at it with three fingers, her legs off the bed, feeling great because she had actually slept without waking. She used the bathroom and put on the clothes she’d set out in order not to waste time, brushed her teeth, pulled a comb through her gray wayward hair and considered lipstick, decided she should not go without. Must not look raggedy. She applied the lipstick, pressed her lips together and blotted them with a bit of tissue.

The hall was dark with boxes stacked the entire length of it, neat and orderly, head high. She dared not go higher for fear the boxes would fall. In her bedroom she stopped to say aloud, “Good morning, Daniel.”  This stack of goods pertained to him, brought back her memories: sports equipment, a nice blanket or two for his always cold feet, a wonderful jacket she had always wanted to buy for him but never could afford. Here she stopped briefly and thought of her Daniel, though it bothered her that she now had trouble picturing his face. What she saw was his face in the picture, not his face as a living person.

The stack in the living room was Timmy’s; she ran her hands over the boxes lovingly as if she were caressing Timmy himself. Everything was very clean. The walkways between the stacks had no dust on the floor and the stock itself was neatly dusted and precisely put together. Timmy had always been a neat little boy. His room never had clothes thrown on the floor or things out of place. As a young man he’d kept his apartment precise. She couldn’t think those things without remembering the day Timmy came for a visit and jumbled up his words, how upset he was that they wouldn’t come out as he wanted and how that had been the start of the end.

Margaret made herself leave Timmy’s place and go into the kitchen, where the espresso machine was set up. She flipped the switch and got her cup, with the milk already in it, from the fridge. In minutes the coffee was done. She grabbed her purse and was on her way; it was important to get to the first sale before the dealers who’d be waiting an hour before the sale was to start, maybe even ringing on the front door begging to be let in. Once the door was open the dealers would sweep the sale clean within minutes.

On the side of the road she saw a man putting up a sign. She braked hard. It was an unadvertised sale, the best kind as the dealers didn’t know about it. Minutes later she was standing in the garage, supremely satisfied that she was the only buyer. In the corner she found a free hot air popcorn maker. She’d read that those were good for roasting coffee. She’d never roasted her own coffee but it might be fun. Besides, she remembered what fun she and Daniel had had and how they felt when they had popcorn and fudge for dinner. Cheating and silly was what they felt. She scooped it up.

One of the household members must have been an artist as there was a complete set of oil  paints in an artist’s box for $5.00. What a deal. Those paints were very expensive. Once when Timmy was little, she had taken up painting, but they had had little money to spare. Daniel had been working at the Cheese Factory and making just enough to get by. The picture she was painting that day had needed Pthalo Yellow that she didn’t have and couldn’t afford. Yellows were expensive. Yellow ochre had had to do, but it didn’t do and the painting had been a failure, not quite right because of the wrong color.

Dealers were moving quickly through the next sale, their arms already full. Margaret picked up an old celluloid powder box and was looking at it when a dealer came along and took it from her hands.

“I was buying that,” the woman said.

Shocked for a moment, Margaret didn’t react. She didn’t need the box, but it hadn’t been nice for the lady to take it out of her hands. This dealer was especially rude. Margaret had met her at many other sales. Margaret went after her and took hold of the box. “Bitch,” she said loudly, holding the box firmly to her chest. The woman stuck her head up, harrumphed, and walked away, beaten.

She found a toddler’s sweater in brightly colored greens, reds, blues and violets with wood buttons down the front. She thought of Timmy and his chubby knees walking with his early unsteady feet toward her on the front lawn. How happy she had been. She stroked the front of the sweater, almost felt her baby’s skin beneath it. She had no use for a toddler’s sweater. None at all. She did not even know anyone she could give it to, but it was perfect, wasn’t faded, had no pulled strings, was not out of shape.

On the way home Margaret began to cry. Her hand rested on the small sweater. It was unfair that Timmy should die like that. Her last memory of Timmy shamed her, how she had been repulsed by his drawn look, his cancer-scourged body wasted and his color a ghastly gray. His eyes had become overly big. She’d made herself touch his cheek because she loved him but touching his skin was repulsive. It was as if he were already dead; her guilt over these thoughts forced her to lean down to kiss him.

And Daniel giving up, dying so soon afterwards. What kind of God would take everything from her like that, would leave her so totally alone?

At home she wrapped the sweater in tissue paper, put it into a box and set the box on Timmy’s stack. The celluloid box she put on the windowsill, moving perfume bottles around to make room. She had forgotten to eat and now got out bread, butter and peach marmalade. Daniel had always eaten a ton of peach marmalade. She just liked to look in the refrigerator and see things for her men and not the niggly supply of things for herself.

Margaret was sitting at the table just finishing up when she heard a light rapping at the door. She could see her neighbor through the window in the door. Lilly had not been to visit inside the house since shortly after Daniel died.

“I haven’t seen you outside for awhile and I wanted to check to see if you were doing okay,” Lilly said.

“Come in, come in, have some coffee with me,” Margaret said kindly, thinking how nice it was for Lilly to visit her.

Lilly looked around. “Why Margaret, what is this? Are you getting ready to move?”

“No, no,” Margaret said, unable to explain her things, her treasures.

“But so much stuff,” Lilly exclaimed looking more closely at the piles, boxes stacked so neatly and so tidily.

Margaret was getting edgy. She didn’t want to talk to Lilly about her things.

“But, Margaret, you can’t keep all this stuff around like this. It’s a fire hazard. Let me help you clean it out.”

Alarm took over. Lilly could cause her trouble, might cause her to lose all that she clung to, to what she had left of Daniel and Timmy. Margaret bristled.

“It is none of your business what I keep in my home. You need to mind your own business.”

Margaret was sorry she was being so cruel to Lilly but she couldn’t let her say these things or make trouble. She couldn’t lose her things the way she’d lost Timmy and Daniel. She wasn’t meant to lose these. They weren’t people who died. They were things she could keep always. They couldn’t just die without her permission.

Margaret opened the door and gave Lilly a firm look of dismissal. As Lilly walked out the door she pleaded, “Margaret, let me help you.”

When she was sure Lilly was gone, Margaret locked the front door, went and locked the back door, pulled the curtains shut. No one would ever again come into her home. No one came, not that day or the next few days and Margaret relaxed. She sat in her house, and except for the garage and estate sales, she saw no one and seldom went out. She talked to Timmy and she talked to Daniel. She lovingly caressed their stacks and cared for them, dusting them and readjusting the placement of packages and boxes. “That’s more comfortable, Timmy,” she’d say. She pulled a chair up next to each stack and sometimes sat reading next to them to keep them company.

When Margaret went to the store, she bought marmalade until she had eight jars in the fridge; when she went to the sales she talked to the dealers about her Timmy and Daniel who were waiting for her at home.

Bonnie Sedgemore has published and written all her life but hasn’t had great success at short fiction. She loves to write short fiction. Recently she became seriously ill. Her daughter said it was like she was skiing down a slope and hit a tree. Life changed and she learned that she wasn’t writing for money as she had thought. Not even for a career. She is now writing more fervently because she wants to tell something beautiful. Because she wants to share. And now it is fun.
Next: A Good Session »
Home | Archive