A Sketch
by Patty Dann 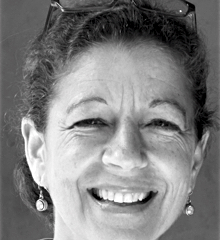 Today my first novel, written on a Hermes Rocket portable typewriter thirty years ago, became available on Audiobooks, which I listened to on my iPhone as I walked through Central Park to my job as a writing teacher at the YMCA. I was startled to hear my work translated to a new medium, as I’ve been startled with each stage of publishing evolution.

An October afternoon thirty years ago, I received a pale blue airmail envelope, smudged with carbon paper, from my British publisher, the firm of John Murray, Ltd., at 50 Albemarle Street in London. On an upright Underwood typewriter, my editor had written that they were “looking forward vigorously to my arrival.”

Three weeks later, jet-lagged and excited, I approached the small, ornate white building in London for the British publication of my slim novel. Jock Murray, an elderly man with bushy white eyebrows whose great-great-great grandfather had founded the firm in 1768, met me. He straightened his bow tie and took my hand.

I was ushered into a hallway lined with shelves that held books and artifacts from another world: all the first editions from the past three centuries, including the two best-sellers from 1859, Darwin’s On the Origin of Species and Samuel Smiles’s Self-Help as well as fossils and strange bones and exotic feathers authors had brought back from their travels.

On the table was a cracked leather box. Murray pulled me by the right hand and opened the box with his left. Out fluttered tiny pieces of folded paper, which contained writing in faded brown ink.

Each tiny paper package had the names and dates of Byron’s girlfriends: Carolyn Lamb, Teresa Guiccioli, and the Maids of Athens. Murray carefully unfolded some of the precious papers to show me curls of chestnut, black, auburn, and blonde hair. Then he took out one folded piece of paper from the corner and read, “Whose this is I do not recollect, but it is of 1812.”

Later on that magical day, Murray showed me Byron’s boots, specially weighted by the cobbler to correct his crooked feet.

This morning, as I walked home from work through Central Park, for $4.50 and two touches of my finger, I bought the complete works of Lord Byron written with his quill pen in the early 19th century. As the crocuses pushed up through the mud, I listened to Byron’s words on my phone.

But words are things, and a small drop of ink,

Patty Dann is the author of The Butterfly Hours: Transforming Memories into Memoir, The Goldfish Went on Vacation: A Memoir of Loss and The Baby Boat: A Memoir of Adoption. She has also published three novels, Mermaids, Starfish and Sweet & Crazy. Her work has been translated into French, German, Italian, Portuguese, Dutch, Chinese, Korean and Japanese. Mermaids was made into a movie, starring Cher, Winona Ryder and Christina Ricci. Her articles have appeared in The New York Times, The Boston Globe, The Chicago Tribune, The Philadelphia Inquirer, O Magazine, The Oregon Quarterly, Redbook, More, Forbes Woman, Poets & Writers Magazine, “The Writer’s Handbook" and “This I Believe: On Motherhood.”
Next: Suspect »
Home | Archive

5 thoughts on “Lord Byron on My Phone”