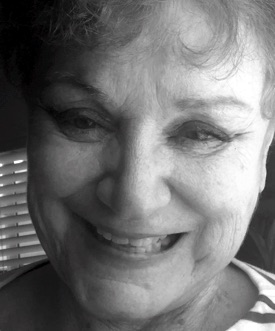 Mrs. Szostek appeared to be in her early hundreds when I was still in kindergarten. She was small, white-haired, hunched over like a bird looking for seed. Mr. and Mrs. Szostek lived in the apartment right next door to ours in one of those solid brownstone buildings that are still typical of Brooklyn. They were both wartime refugees, escaped from Poland, as were many of the other residents in our building. I would sometimes see Mr. Szostek coming home from his job as a civilian welder in the naval shipyard. He was a big, booming, cheerful guy swinging a metal lunchbox as he greeted all the neighbors, even the kids, and he thought nothing of tossing me up into the air if I was on our stoop. Then he would enter our building and run up the stairs three at a time to his front door where Mrs. Szostek stood waiting. They would hug and then go inside chatting happily in Polish, he looking so young, she looking so ancient. I had never seen anything like it.

The Szosteks had no children. They came to America in 1942, the year I was born, and whereas Mr. Szostek quickly learned English and sailed out into the world with amazing confidence, Mrs. Szostek shrank. She had tried going to English lessons, but the ordeal was too frightening for her. Sirens made her tremble, someone knocking on her front door sent her into a locked bathroom. When Mr. Szostek brought home a pair of canaries for his wife, they became a huge part of her life.

I remember seeing Mrs. Szostek leaning out the window on a pillow as she watched the goings-on in our neighborhood. That was as far as she could venture without the strong arm and encouragement of her husband. We kids didn’t think too much of it. We just relegated Mrs. Szostek to the domain of the other strange grownups on our block, people like Billy Miles who liked to ride the subway all day with a newspaper he couldn’t read, or Mr. Devaney who spied on us in the nearby park. We would just wave and go on jumping rope, playing potsy or stick ball, bouncing a ball to: “A, my name is Anna and my husband’s name is Al …”

As I got bigger, Mrs. Szostek chose me as her special assistant. At first, I tried to avoid this honor, but it did no good. From her front window, she could see me coming home from school and even if I crept up the stairs, would suddenly open her door and grab me before I could escape. My three older sisters were allowed to pass in freedom; I was the one she wanted, and it was daunting. She reminded me of my lifesaving classes at the public pool where we were warned about being pulled under by someone in a panic. I was eight years old; I didn’t know how to be a grownup for anyone else.

“You go me store?” she’d ask, taking hold of my sleeve. There was nothing I could do. You don’t turn your back on hundred-year-olds.

“Okay,” I’d say. “Just let me put my stuff away and get out of my school uniform. I’ll be right over.”

My sisters thought it was a riot, and teased me unmercifully. I ignored them.

Into Mrs. Szostek’s apartment I’d go with my pad and pencil to write a list. After greeting the canaries, I’d push through the hand-beaded curtains that led to the kitchen, which always smelled of cabbage rolls, fried cakes, pierogi, and kielbasa. Soup was always simmering, and bread always rising. Everything gleamed, right down to the copper pipes beneath the sink; dishes washed and put away, handmade doilies on the table. In my family’s apartment, dishes went from the drain board to the table, never once entering the cupboard, and chaos reigned. We cleaned house on Saturday mornings, period.

If I were lucky, Mrs. Szostek would have saved labels for me. I’d list the Russian rye she liked, the canned tomatoes, the special jams and pickles. Where I had difficulty was with the bulk items she wanted from Schreiber’s delicatessen. I simply could not be certain of Mrs. Szostek’s English.

My solution was to try and race through the puzzling items when I placed my order in the store.

“Half a pound of ham and one pound of vomit cheese,” I would say to Mr. Schreiber or his wife.

The other customers laughed.

“Is for Mrs. Szostek, yes?” the owner would say. I nodded, mortified. He would take out a great slab of white cheese and neatly cut off just the right amount.

“Is voma cheese,” Mr. Schreiber would explain, as if that made it all clear.

Years later I would learn that I was ordering “farmer’s cheese,” a kind of fresh, unpasteurized cheese that was too exotic for my own family. We ate Velveeta.

Sometimes I would write letters for Mr. and Mrs. Szostek, straightening out some bureaucratic mess with the IRS or the gas company that had them in mortal fear of deportation. By special arrangement I read the gas and electric meters so that no stranger needed to be admitted to the apartment, and I called in my readings every month. Though still in grade school, I had inherited my mother’s fearlessness and a healthy cynicism toward authority. The Szosteks were amazed at my abilities, and sent me home with special candies and pastries that my sisters grabbed. I was not allowed to take money.

“They’re our neighbors, God bless them. I won’t be having you taking from them in their time of need,” my Irish immigrant mother would say. And it was always someone’s time of need.

A few years later, Mr. Szostek died of cancer. I watched in horror as he shrank to his wife’s small stature, and then he was gone. It was as though a great wind had blown through our building and taken everything with it. Even the canaries were silent.

We all thought Mrs. Szostek would die, too, but she didn’t. Instead she took all her suffering and put it with whatever other atrocities she had known in her life, bending even further toward the ground and growing ever more reclusive. I sometimes sat with her for an hour or more, just holding her hand, willing her to breathe.

I took to paying Mrs. Szostek’s bills for her, in cash that she made me carry in a tiny purse pinned inside my pocket. I dropped off her shopping lists at the store on my way to school, and picked up the groceries when I came home. Mrs. Szostek was too frightened of the delivery boy to let him into her apartment. When one of her best singing canaries died, my father helped me pick out another at the pet store, watching with me for a whole afternoon as I listened to each song and examined each bird for health and vitality.

When I brought the canary to Mrs. Szostek, she cried as though her heart would break. It would be many years before I understood how she had come to expect cruelty from the world, and how kindness completely disarmed her. It felt strange to comfort Mrs. Szostek as she clung to me, like patting someone with a bird’s hollow and fragile bones. Still in grade school, I was already much taller.

Life went on. My sisters and I grew up and left for college, nursing school, marriage. My parents divorced. Grandchildren were carried home for visits, in my case from across the country.

And Mrs. Szostek moved in with my mother.

“I heard the poor thing crying one night,” my mother explained, “so I asked her over for a cup of tea.”

That was all it took. Small mercies can transform the world.

Love comes in many guises. People look back over their lives and say that such and such a time was the happiest, another time the hardest. All I can say is that when I visited my mother and Mrs. Szostek in our old apartment, there was an atmosphere of peace and contentment that had never been there in my childhood

My mother continued to work for many years, helping different clothing designers come up with workable models for factory manufacture. She came home to heavenly food, singing birds, a grateful friend who loved her. And to Mrs. Szostek, my mother brought the outside world. I can hear them now discussing two factory workers in love with the same man, who screamed at each other in Spanish as though no one could hear them. New York City’s garment industry was better than any soap opera, and Mrs. Szostek hung on every word, delighting in the crises, daily tantrums, and delicious drama. Her English improved, but she began to speak with an Irish brogue. And my mother, who could be the most caring of conflicted women, was finally being cared for. It was a joy to see. My mother and Mrs. Szostek became an invincible partnership, immigrants creating their own version of the American dream, having a lovely time of it despite everything. Good for them.

Author’s Comment: This piece still makes me cry. Writing and re-reading it from the vantage point of sixty-five years and three thousand miles, I see how my youth shaped my life. Of course I would become a medical social worker, of course I would carry a caseload of 150 aged, blind and disabled clients, of course I would love them all. They thought I was an angel and Superwoman. In fact, I was just my Mother’s daughter.

Lenore Pimental joined a “Live Stories” class when she retired. Her writing has appeared in The Sun, The Sonoma Senior Times, and The Press Democrat. She won first prize in Eldertreks’ international writing contest. Santa Rosa, California, is home, within a mile of three daughters and six grandchildren.
Next: Apple Strudel »
Home | Archive