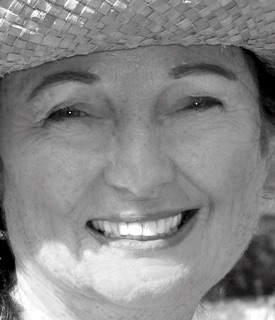 Johnny von Hinden kissed me on June 19,1953. I was fourteen and it was my first kiss. He was German, I am Irish. It was considered to be an inter-racial kiss. But that was not the big news of the day. In fact, no one knew of the kiss except the two of us, my sister and his mother.

The corner of the Bronx where I grew up had been settled largely by German immigrants. Our landlord was Old Lady Sorgenfrey. The man next door was Rudolf Kurtz. All the bakeries and delicatessens between our house and the el tracks were deliciously German. I can still see those immaculate displays of coleslaw, the piles of plump sausages, barrels of big juicy pickles, trays of magical marzipan and baskets of dark, hearty pumpernickel. Alas for the Germans, Throggs Neck was a neighborhood in transition – we Irish with our sprawling, brawling families were moving up and moving in. And the Italians were right behind us. In the grand American tradition, we looked down on the Meatballs with as much disdain as the Krauts showered on us, the Paddies.

So it came as a great surprise to me that Johnny von Hinden even noticed me. In addition to being Teutonic, he was an older man of sixteen, and he was what all the girls longingly called “a hunk” and “a living doll.”  His skin was a shade more golden than the best of my freckles and he subdued his tawny hair into the slicked-back style known as a D.A. – a duck’s ass. His eyes were blue glass and mocking and he walked with a heart-breaking swagger. He had a grown man’s biceps and always wore a spotless, ironed white tee shirt tucked into his jeans, which we called dungarees. The sleeves of the snowy tee were rolled back over his bulging arms and the left one cradled a pack of Lucky Strikes. An air of danger sizzled about him that stirred in me and most of my virginal Catholic girlfriends, an excitement we didn’t quite understand, but which we were positive must be passion, bordering on magnificent obsession. He went to public school.

As I passed by his house that fateful day on the way home from the deli with a pound of potato salad and a quart of Ballantine for my parents, Johnny sat on his stoop and motioned me over with a confident jerk of his head. “Wanna come ova and watch the teevee afta suppa?”

When I managed to answer, even though my tongue felt like a giant mutate of my normal tongue, that I’d have to ask my mother, Johnny just smirked. “Seven a’clock. The ball game’s on.”

My mother and father exchanged alarmed parental glances. This was clearly the Rubicon of my adolescence. As if they had fire-drilled just such an eventuality, my mother got out the Bronx directory and telephoned Mrs. von Hinden, whom she did not know, to determine if she would be home at the time of my proposed visit. I, of course, was mortified to have such an embarrassing vigilante mother.

Johnny waited confidently, diffidently, just inside his screen door. His house was small and dark. That’s what I remember: the dim light, the television glare, the stuffy furniture, and parents too big for the room. Neither parent greeted me with anything more than a knowing, cheapening glance. Johnny’s shirtless father lounged in his chair, his stocking feet propped on a hassock. I’d seen the man before, walking home from the bus stop with his lunch box, but never without a shirt or with his belt unbuckled.

Johnny’s mother was a complete surprise – shockingly voluptuous, larger than life, floridly colored, deeply cleavaged, artificially blonde. She sat comfortably on the broad arm of her husband’s chair while his hand moved casually, slowly, up and down her rump. There was something about the languid rhythm of his strokes that made me look away in confusion. At that age, I didn’t recognize the atmosphere in the room as sexual energy. It just felt feverish and incoherent.

Johnny and I sat on the sofa with his arm draped along the back of the furniture. I leaned forward as if the arm was a wild animal. In my terror and excitement, I could scarcely breathe.

Precipitously, the televised ball game was interrupted by John Cameron Swayse, in various shades of grey, delivering the big news of June 19, 1953: Julius and Ethel Rosenberg were to be electrocuted at Sing Sing in fifteen minutes. And then it was back to the roar of the game. Nobody said anything. Mrs. von Hinden just settled more comfortably into Mr. von Hinden’s roving hand. Finally Johnny whispered, “Let’s go outside,” and led me through the cluttered vinegary kitchen to the treeless backyard, where he grabbed me and kissed me beside the blue hydrangeas.

I wish I could report a knee-dissolving swoon, bunches of flowers in soft focus devolving into two oscillating hearts. But I was curiously analytical, making mental notes on the uncomfortable angle of my neck, the pressure on my teeth, my wide-open eyes, his closed. My first kiss might have lasted until my neck broke or dentures were required, but Johnny’s mother interrupted with the news that the Rosenbergs were dead. I don’t know how long she had been standing behind the screen watching us with a satisfied smile. “Yeah, it took three jolts to fry the bitch. The top of her head smoked.”

“I better go home,” I said, blushing, mortified and strangely triumphal, new feelings for me.

When Johnny made no move to follow me, his mother admonished him, “Be a gentleman, Johnny. Walk your girl home for Christ’s sake.”

The heady glory of being “your girl” didn’t last long. Johnny only walked me half way home.

When I got there, my parents were in a heated argument about the Rosenbergs, my father claiming they got what they deserved and my mother maintaining that the death penalty was inherently immoral and barbaric. My father, in his debate-silencing bombast, bellowed, “You’re whining for mercy for that pair of commie rats? What are you? Crazy? You’re stark raving mad, Agnes.” They glanced at the clock when they noticed me, then went on with their battle.

My eleven-year-old sister was sitting in our bedroom reading Heidi. Patsy, already upwardly mobile, cultivated a fraulein alter ego and wore her hair in long blonde braids. “Did Johnny von Hinden kiss you?” she asked.

I smiled. “Wonderful.” I wasn’t sure why I chose to deceive.

I felt like a complete failure. Halfway home. I didn’t mention that shameful detail. Clearly there was much to be learned about love from this first encounter, the disappointment, betrayal, the physical discomfort, the mysterious compulsion, the bragging and covering-up.

Within days, before I could even tell my cousins and friends about being kissed by Johnny von Hinden, it became common knowledge that he was going steady with Frannie Kelly, who wasn’t even pretty, but her clothes always matched.

At least I had gotten that first kiss out of the way. Now I had a base line for comparison. I could practice against the palm of my hand, and the next time I’d try closing my eyes.

I was a long time getting over Johnny von Hinden and even longer wondering what Frannie Kelly had that I didn’t. Since then, I’ve learned a bit more about love, but the mystery only deepens, and for me love is always somehow tied in with the atomic bomb and a newspaper photograph I kept of Julius and Ethel Rosenberg kissing passionately in the courtroom just after being sentenced to death.

I wrote the story because of the newspaper photograph of Julius and Ethel Rosenberg kissing. The image has stayed with me all these years. At the time, I wanted a love like that with all its drama – minus the electric chair, of course. The Rosenbergs didn’t look like movie stars. They had no obvious glamour. That meant love of the grander sort was accessible to everyone. What surprised me as I wrote the story, was how perilous love appears. It is the magnificent risk.

Short stories by Rita Ariyoshi have appeared in consumer publications and literary journals, and won several awards, including a Pushcart Prize, Grand Prize in the National Steinbeck Center short story competition and the University of Hawaii Ian MacMillan short fiction first-place award. A novel in progress was a finalist for a James Jones Literary Fellowship. She is the author of National Geographic Traveler Hawaii, Maui on My Mind, Hula is Life and other non-fiction books. She lives in Honolulu with her husband and poodle.
Next: Charlotte’s Puzzle »
Home | Archive

2 thoughts on “The First Kiss”