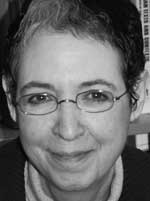 When we met, Sandra Gilbert was just beginning to be introduced and known as a “fear poet,” a reputation that rested in part on the signature poem with which she opened early readings as well as her first volume of verse, In the Fourth World (1979). The surrealistic, avuncular letter that inexplicably arrives in “Getting Fired, or ‘Not Being Retained’” delivers its death sentence (“You’re fired!”) with insouciance and then unpacks, orders everyone in the household around, replaces all the books in the study with untitled paperbacks, and takes over a domicile from which the poet must flee into an exile of vertiginous indecision: “If first I — / than perhaps I — / after which, of course, / and so forth –.” Undoubtedly gothic, the epistolary intruder, like the Sicilian ancestress who arrives with “misshapen, peculiar” instruments in “The Grandmother Dream,” nonetheless acts like a muse, firing the poet’s imagination with furious light and illuminating the psychic geography beyond an invisible door opening onto, yes, ominous fright but also incarnate fruition.

Throughout 1973 and 1974, in a region of the States she liked to call “the middle of the middle of the country,” Sandra would scrutinize precisely such prescient portals with me in critical conversations that opened the doors of my perception while we ate pizza at a restaurant or conferred in our offices. Leaning forward in her chair, patting the odd horizontal part (from ear to ear) that produced the bangs overhanging her eyes, she would repeat (slowly, to imprint on my brain) phrases from the literature we were reading and then team-teaching—“the low, slow ha! ha!” or the “eccentric murmurs” or “the polar expiation”—as I would perhaps demur or concur, driving her to recite, “Dare you see the soul at the white heat?” or “She dances like a bomb, abroad.” Though she would soon be California bound, The Madwoman in the Attic(not to mention its various offshoots) was on its way to being conceived, along with a lifelong friendship that would braid together our minds and hearts.

These were heady days, for after dealing with the bumpy career miseries that led to the composition of “Getting Fired,” Sandra and I (and Ruth Stone too, though on a more temporary basis) had been hired at Indiana University, where it began to dawn on me that I was collaborating not simply with a colleague but with a poet-critic. Subsequent poems about Emily Dickinson’s bread baking and about nineteenth-century governesses, fallen women, and wet nurses in Emily’s Bread (1984) made manifest how Sandra’s scholarship inflected her verse, though perhaps a more mysterious poem like “On the Third Hand” would remind only me that, as Sandra discovered from a cache of pornography recovered several years after the composition of this poem, Edith Wharton had conceived of sexual potency in terms of a mystic third hand. In the plethora of personal poems that followed in Blood Pressure (1988) and Ghost Volcano (1995)—as in “Anniversary Waltz,” for example, and “February 11, 1994: Berkeley, Anniversary Waltz Again”—scholarship and literary criticism, purified in the kiln of her fiery imagination, worked its alchemy on the greatest love and loss of her life, her husband Elliot. Crystallized by passion, the poem to Elliot alive voices the delights of compatibility—“I cannot imagine who else / we might have become”—that underscore the woeful lament of the barriers imposed by death in the poem to Elliot three years dead: “To have gone on becoming without you!”

Even these quintessentially private poems can be enriched by reading Sandra’s memoir of Elliot’s tragic fate, Wrongful Death, as well as her extensive meditation on mortality, Death’s Door. Sandra’s historical and literary scholarship on such verse forms as the elegy and the sonnet produced ardent and formally intricate verse; and vice versa: the poetry collected in her last two published volumes, Kissing the Bread(2000) and Belongings (2005) transported the prose into lyrical meditations on widowhood and mourning. Still, the so-called “fear poet” never evolved simply into the “grief poet,” especially for readers attuned to Sandra’s buoyancy, zest, and curiosity, her willingness to be surprised by joyful new intelligence of children and grandchildren, Yiddish jokes and Italian ancestry, foreign travel and grand meals and the sort of intimate relationship celebrated in “He Discusses Gravity,” part of the longer sequence “When She Was Kissed by the Mathematician.” For while an intense tenacity of feeling guarantees that Sandra will never seek or find a facile way to get through the losses she has incurred, it also inflects the poignant humor and empathy that fuel, for example, the riveting and formally dazzling sequence on her mother’s dying, “Belongings.”

Paradoxically, the poet-critic who best intuits in “Against Poetry” why “everybody hates it”—“the busyness / of words sweeping up / after all that sputter . . .”—uses her links to the literary past, to Marianne Moore in this case, so as to fashion a verse of everyday use. In “For Ruth Stone on Her Ninetieth Birthday,” a work from her forthcoming volume Aftermath that evokes Elizabeth Bishop’s homage to Marianne Moore and also Bishop’s villanelle “One Art,” Sandra commemorates the irreparable trauma Ruth Stone suffered when her husband committed suicide even as she celebrates the linguistic exuberance that animates Ruth Stone’s survival in artistry as well as Sandra’s artful reinvention of her last name: “your gift of tongues made flesh and blood of stone.” Whether stunning acts of attention or harrowing journeys into the broken soul, the poems of Sandra Gilbert refuse the mastery of disaster for a more humane acknowledgment of the fear, grief, but also the tender ferocity with which she roots herself in living life.

Susan Gubar is a Distinguished Professor Emerita at Indiana University. She is the author of Poetry After Auschwitz: Remembering What One Never Knew (2003), Rooms of Our Own (2006), and Judas: A Biography (2011). She has continued to collaborate with Sandra M. Gilbert on a third edition of the Norton Anthology of Literature by Women (2007) and the new Norton Reader of Feminist Literary Theory and Criticism (2008). Her forthcoming edition of autobiographical essays by prominent feminist academics, entitled True Confessions: Feminist Professors Tell Stories Out of School, will appear in 2011.
Next: The Open Heart Is a Force For Peace »
Home | Archive