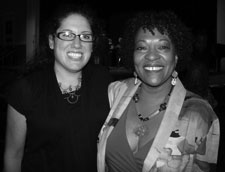 I have known Rita Dove for more than a decade, first as a teacher, and later as a mentor and friend. She’s seen me through an MFA degree, a wedding, a pregnancy, and three books of poetry. We met in 1999, when I showed up in her graduate poetry workshop at the University of Virginia. Our workshop met in the dining room of her freshly built house—the old one on the same site had been hit by lightning and burned to the ground the year before—and during the workshop silences, we listened to her house creak and settle into its new bones. When I think of Rita, the word that always comes to mind is kinetic. Even her house was moving, shifting, dancing to knit itself together. After their house burned, Rita and her husband Fred took up ballroom dancing, which led to her book American Smooth (2004).

Rita Dove, Pulitzer Prize winning poet, and the youngest ever U.S. Poet Laureate Consultant in Poetry to the Library of Congress, gathered us in—a motley crew of ten broke and mostly unkempt graduate students—and even made sure to feed us when we rolled into her dining room with fresh poems each week. I knew Rita’s work well before I knew her personally. I first stumbled on her poems in a copy of Contemporary American Poetry when I was fifteen. I had bought the book with one dollar of babysitting money at a library sale. Rita was one of only thirteen women in the anthology. “After Reading Mickey in the Night Kitchen for the Third Time Before Bed” had the bravest and most glorious opening lines that I had ever read in a poem: “My daughter spreads her legs / to find her vagina.”

In reviews and critical pieces, the words that appear most often to describe Rita’s poetry are “grace,” as in “graceful phrasing of language,” and “craft,” as in “her craftsmanship” or “carefully crafted lines.” Trying to characterize the entire body of Rita’s work to date—her nine books of poems, her novel, a collection of short stories, a verse drama, lectures, and a song cycle, as well as a host of additional creative projects—is nearly impossible, but I would add “fearless” to the list: Rita is an intrepid writer who is constantly challenging herself with different projects and testing out new techniques. The breadth of intellectual interests that appear in her poems, which thread their way through religion, histories, art, family, mythology, and countless other subjects, is nothing short of astonishing. Her most recent (and formidable) undertaking was editing The Penguin Anthology of Twentieth-Century American Poetry, just published at the end of October 2011. “I was bent on exploring what mattered in the last century, what mattered both to me and American poetry at large, what brought us to where we are right now. So I said yes to poetry, not to ego or ambition,” she said in an interview in the December 2011 issue of The Writer’s Chronicle about the anthology.

One of my most vivid memories of Rita was seeing her when I was about six months pregnant, after a poetry reading in Charlottesville, where she told me the story of her daughter Aviva’s birth—and how she and Fred danced around the delivery room together to help her labor progress. When I think of Rita, I think of the body: I think of hers, always in motion. When I last heard from her, she had built a ballroom behind her house, and she and Fred had taken up the Argentine Tango. During the holidays, she tells me, she’ll be cruising up the Amazon, and this past summer she traveled across the country by car and ship, eventually landing in Homer, Alaska, where Highway 100 ends. Kinetics, movement, language, music. In a 2005 interview inCallaloo with poet Camille Dungy, Rita said this about music: “Let me say it straight out—I believe that if a poem doesn’t sing, it has no business being a poem.”

The poems that follow span almost thirty years of Rita’s career—from her first book, The Yellow House on the Corner (1980), to her most recent collection, Sonata Mulattica (2009)—and highlight many of the elements that make her work so compelling: her luminous imagery, the lyric intensity of her voice, and the music that drives all her poems.

The speaker in “Lamentations” commands us to unlock ourselves—to see, hear, and feel the richness of the world and drink it in. Rita says yes to poetry in every aspect of her life. Through the way she lives, and the way she writes, she’s shown me how to be open to life ’s challenges and to work that movement toward enlightenment—that intellectual curiosity born out of passion and experience—into my poems. Through Rita, I learned, and continue to learn over and over again, that the practice of living, of writing, of dancing, are all part of the same project, which is rooted in our bodies, which is an extension of our bodies, and their crazy, hard, joyful individual music.

Erika Meitner is the author of Inventory at the All-Night Drugstore (Anhinga Press, 2003), winner of the 2002 Anhinga Prize for Poetry; Ideal Cities (HarperCollins, 2010), which was a 2009 National Poetry series winner; and most recently, Makeshift Instructions for Vigilant Girls (Anhinga Press, 2011). Meitner’s poems have been anthologized widely, and have appeared most recently in APR, Tin House, Virginia Quarterly Review, Slate.com, The New Republic, and in The Best American Poetry 2011. She is an assistant professor of English at Virginia Tech, where she teaches in the MFA program. Her website is www.erikameitner.com.
Next: A Woman’s Got to Do »
Home | Archive