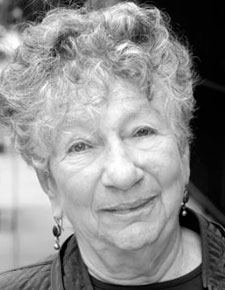 A week before her 74th birthday Susan fell down the subway stairs. For just an instant the falling silhouette in the introductory credits to Madmen flashed through her mind. During the sixties, when Madmen was set, Susan had been a young wife and mother, unaware then of the ways she too might fall.

She had been carrying a few parcels, returning home from seeing a daughter through a colonoscopy at the hospital. She was tired, and she shifted to the right to reach the banister but misjudged a step and fell. There were cries of dismay from a few people nearby, a woman’s soft “Oh!” rising above the others. A small group gathered around Susan, and she could sense their concern mingled with the desire to avoid involvement.

Beyond the pain, she was deeply embarrassed, although at least she had not shit herself. Nonetheless, her immediate concern was to forestall the impression she was certain she must have been conveying. “I’m okay, I just missed my footing,” she said, as if that would cancel out the mishap. She held out a hand for assistance, and a man grasped it and pulled her to her feet. “You better sit down for a minute and rest,” someone told her. “You hit your head really hard.”

The fall had abruptly expelled her, at least in her own mind, from the role of motherly, capable caregiver. And it did seem a good idea to sit down on the bench for a few minutes as the crowd dispersed. She attempted to brush the subway filth off her winter jacket and out of her hair, thinking it was a pity that she had taken off her hat in the train when that nice woman sitting next to her noticed she was reading Bleak House and struck up a conversation about the pleasure of re-reading the classics.

But just now her head was throbbing with pain and a big goose-egg was rising. She knew what the danger signs of a concussion were, and she didn’t think she was concussed. Hadn’t she raised two children and treated many bumps on the head, a lip bitten right through, a broken arm that had assumed a frightening S-shape, blazing fevers, and countless stomach viruses? When her older daughter, Hannah had been a lively three-year-old she had climbed up on the stool in the pantry and fallen, hitting her head hard on the edge of a partly-open drawer. When Susan scooped her up, Hannah had drawn a deep breath, but instead of the howl of pain and outrage Susan was expecting, her eyes rolled back and she had gone terrifyingly limp. Well, that hadn’t been a concussion either, and by the time the pediatrician called back to advise that Hannah be kept quiet, the little girl was up again, eager to help her mother cook.

There had been so many vigils when Susan had had to sit and rock a feverish child until dawn in the old black rocker she still owned. She would sing “Hush little baby, don’t say a word” until she wearily switched to humming the melody. Once Abigail, her younger daughter, had lifted her burning forehead and demanded: “Say the words!” Now both daughters were grown women: one had survived breast cancer, the other had recovered from many broken bones after being struck by a taxi while crossing Park Avenue.

On the subway bench Susan felt an intense need to reach the privacy and security of her small apartment, so cozy and neat with its garden view. She slowly and carefully climbed the stairs to the street and passed the man who had helped her to her feet, standing in front of the candy store. Susan told him again that she was okay, although he hadn’t asked.

By the time she got home she realized that inside the layers of her winter clothes the right sleeve of her pullover was wet, was in fact soaked with blood. The force of the fall had scraped skin and flesh off the back of her elbow. She wrapped the blue cold pack from the freezer in a washcloth and applied it to her head in hopes of reducing the swelling, but she was unable to bandage her elbow alone. She called Thelma, the lady downstairs with whom she exchanged small, neighborly favors, like watering plants. Thelma took a no-nonsense attitude to dressing the wound and swabbed Susan’s arm with stinging alcohol before applying a bandage, ignoring her protests that all it needed was some antibiotic ointment. Not long after, Susan retired shakily to bed, where her bandaged elbow oozed on the clean sheets and her skull throbbed.

The pain reminded Susan of that time after Izzy had walked out of their marriage and both daughters were away at college, when she had fainted all alone in the bathroom in the middle of the night. She had come to on the black slate floor with an aching head, unquestionably the result of boozing with that good-looking, dark-bearded Jim Watkins, who was also newly single. They hadn’t had sex yet, although when she turned back from adding a log to the fire she had caught him looking at her ass. If they had gone to bed together that night, she might not have been alone and in the dark on the bathroom floor with an aching head and her jade green pajamas drenched with sweat.

On reflection, Susan realized that she had begun to look backward more often than forward these days. When she took a museum job and moved to New York after the divorce, she had anticipated future possibilities, and she had continued to envision new goals even as her career wound towards retirement. Today she did hope, in principle, that she would live to see her thirteen-year-old granddaughter graduate from high school, maybe even college, but that was more a vague aspiration than a goal. She did begin to carry a notebook in her purse, though, to jot down things she saw that seemed significant so she could think and even write about them.

The progress of age, she realized, would not slow down, whether one was looking forward or backward. She remembered how, shortly after she had returned to New York, she had been in the women’s locker room of the 92nd Street Y and she’d stepped back to let a stooped, naked old woman pass through on the way to the shower. As Susan held the door for her, the old woman muttered to herself “old and ugly, old and ugly.” And she was. Susan recalled that incident now, decades later, and how privately she had savored the fact that she herself was not yet old and ugly.

It also came to Susan that nowadays images and recollections that evoked the past were especially meaningful to her because choices had been abundant then. She had recently received a mail-order catalog that was full of items popular in the mid-20th century. She loved idly paging through this particular catalog, looking at the ads for Walnetto Candies, Tangee lipstick, and Junket pudding mix. In the “For the Home” section, she was startled to come across a photo of the very bedspread that had covered her parents’ bed from 1947 until both died decades later. The catalogue copy urged the prospective customer to “add vintage style to your bedroom with this 1950s reproduction bedspread that boasts plush, 100% cotton chenille in an intricate floral design.” The image so affected Susan that she cut the illustration out of the catalog, put it in a magnetic photo frame, and hung it on her refrigerator door. She enjoyed looking at it—although at the time the bedspread had seemed the essence of the smothering middle-class taste that dominated the 1950s and about which she had written angry little poems in a notebook she kept well-hidden in her room.

In those high school years, Susan had covered her bed with a cheap Indian bedspread, the kind found in Greenwich Village. She had hung a reproduction of Picasso’s “Girl Before a Mirror” on her bedroom wall. It wasn’t as pleasant to look at as the swooning, graceful women in Modigliani’s luscious portraits, which she really enjoyed much more. Today she could see that the Picasso was some kind of adolescent manifesto, like the poems in the notebook. The very ugliness of “Girl Before a Mirror”—the nearly detached, bobbling breasts and obscenely bulging abdomen, harshly depicted in unmediated reds, blues, greens and yellows—didn’t so much please Susan as mutely oppose the 19th century painting chosen by her parents to hang like an icon over the velvet sofa in the living room. That framed, textured reproduction was titled “The Helping Hand” and depicted an old pipe-smoking fisherman, smiling fondly at a solemn little girl in a white pinafore and russet cap as they rowed a boat together over a placid gray sea. Nonetheless, when an old friend recognized the image in a painting in the Corcoran Gallery in Washington and brought Susan a postcard reproduction, Susan propped it up on a book shelf in her own living room and kept it on display.

Now and then in recent years, her subconscious would sometimes send her a communication not in the form of a memory or a dream, but in a text message that unscrolled across the front of her mind like the crawl at the bottom of a TV screen. Some months before she fell down the subway stairs she had received such a message as she awoke from sleep. It went straight to the point, saying: “Your next birthday will be your last.” Susan had turned over and snuggled back into the pillow, muttering “Good. Then I can stop struggling.” But that had probably just been bravado because after she had substantially recovered from falling down the stairs at the subway station, and had passed another birthday, she realized she was glad to still be alive, even though the sagging hem of age now flapped around her ankles and seemed to trip her up increasingly these days.

Joan Diamond has discovered that writing is a good way to perceive the patterns of her life, or at least define them to her satisfaction. She first found that writing is a way to think about the world as she belatedly pursued a formal education and raised a family. After earning a doctorate in the history of art, she made a career as an academic and museum professional and took pleasure in communicating ideas about a range of subjects to a variety of listeners and readers.
Next: The Trojan Cat: A Drama in Three Acts »
Home | Archive