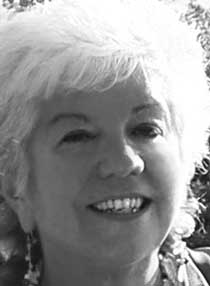 The two aunts could turn out a magnificent feast at any time of year. But their Christmas dinners deserved to go down in the annals of culinary history.

They were elderly spinsters, remaindered, though not unkindly, from a more genteel era. Both were retired schoolmistresses. Both embroidered, wove and crocheted small cotton miracles. Both cooked superbly. Their rock cakes, unlike most specimens of the breed, melted in the mouth. Their chocolate cakes were truly chocolate-y, from the creamy icing to the last licked crumb.

But there the resemblance ended. Betty impressed as a series of spheres. Her little round head with its fluffy silver hair perched atop her little round body, encased in slithery taffetas. Her little round spectacles united her little round nose and round cheeks, permanently puffed into her round, dimpled smile. She gushed sweetness, and doted on the tribe of diminutive grandnephews and nieces, sometimes to their alarm. She played impeccable bridge. More importantly, she played the stock market with the shrewdness of an international financier. Great was the family rejoicing whenever she rode a high flier right from the starting post to climax, and slid off neatly just before the crash. Great was the family amazement when she sewed up futures markets long before they became a commonplace. And great was the family lamentation when she sold out of the blue chip mining she had picked up for a song untold decades before.

“I’ll put it into something with higher return,” she said. “After all, it’s not as if they were family heirlooms.”

Clare, on the other hand, was a series of straight lines and angles. She was tall and gaunt, with wild grey hair that constantly escaped from an ineptly twisted bun. She dressed in appalling faded florals, and strode rather than walked. She snorted frequently through her large bony nose, and virtually ignored the diminutive tribe, to their eternal fascination. Sometimes the persistence of one child or other would be rewarded with a thoroughly adult discourse on politics or philosophy, which only served to heighten the fascination. Her bridge could kindly be described as erratic. Her backyard garden produced prime vegetables when all around had succumbed to blight and bug, and her prowess with screwdriver and spanner, as she stalked the house in pursuit of jammed doors and leaking taps, was legendary.

They were in no way related. They had simply met in the early stages of their careers, formed a firm friendship, and thereafter jointly inhabited the rambling old suburban house where their two families gathered each year for Christmas.

“They are,” pronounced a lawyer nephew, “one of the greatest nonsexual lesbian relationships I have ever known.”

The lack of consanguinity had long ceased to trouble either of their lateral families. In time, both Thwaites and Wilsons came to believe that the two families were in fact related via the relationship to the aunts. Every year, the aunts’ Christmas dinner was a festive affirmation of this de facto kinship. Presents were exchanged between, as well as within, the Thwaite and Wilson families. Offers of assistance and mutual support were made and accepted for the forthcoming year, and joint excursions and holidays planned.

The aunts were banned from giving presents. It is possible that this ban originated from their habit of invariably choosing the wrong size, style and color in underwear and socks. Be that as it may, the official reason was that their staging of the day itself constituted a more than adequate present to both families.

And what a day it always was! Throughout the morning, carloads of Thwaites and Wilsons gradually converged on the old house. At noon exactly, the mountains of presents under the tastefully decorated tree in the living room were sorted, opened and exclaimed over. Half an hour was allotted for thanks, playing, experimentation, browsing and trying on. Then the massed families moved to the dining room, to confront a groaning board where turkeys, chickens and hams jostled huge bowls of salads created from the most prime of Clare’s summer vegetables. When all wishbones had been duly pulled, dessert followed. The aunts cunningly allied traditional Christmas fare to December’s heat wave conditions, with plum-pudding ice cream, fruit salads, and the most wondrous trifles, guaranteed to induce slight inebriation among the diminutive tribe. All children were allowed third helpings on this one great day of the year, and not a few parents were seen to be sneaking just that little portion more. Afterwards, moaning nephews and bulging nieces staggered back to the living room for port, brandy and bridge, while children collapsed on the shady verandah outside.

“The aunts,” proclaimed a public service nephew to his office cronies one winter, “now they really know how to turn on a Christmas!”

But all good things must end. One bright spring day, after a long battle and devoted nursing by Clare, Betty succumbed in her eighty-seventh year. Clare showed no visible signs of grief, other than a new gauntness in her already skeletal face, and a deepening of the deep grooves around her mouth. She made all the funeral arrangements, and singlehandedly produced the subsequent feast to which massed Thwaites and Wilsons returned from the cemetery. The rock cakes, as ever, melted in the mouth. The chocolate cake was, if anything, more chocolate-y than ever, from the creamy icing to the last licked crumb.

To tentative murmurings from both Thwaite and Wilson nieces, Clare retorted firmly, “Nonsense! Christmas here, same as ever. Can’t let a good tradition die!” And stamped out to the back yard for a fierce scrutiny of the emerging summer vegetables.

“You know,” murmured a computer software nephew, as he snaffled the last rock cake, “I do believe Aunt Clare is indestructible. One of these days they’ll just have to take her out and shoot her!”

The tension was broken, and both Thwaites and Wilsons laughed fondly. Aunt Clare was magnificent, they assured each other.

It was just as well, really, that the first arrivals on Christmas day were a doctor nephew and his brood. They were greeted by the tastefully decorated tree in the living room, the groaning board in the dining room, and a silent house. A further search finally revealed Aunt Clare, composed on her bed. She was peacefully dead, her face turned towards a framed portrait of Betty that stood on the bedside table.

Christine Stewart was born in Sydney, Australia, but fled the city as soon as she could for anywhere else, which included Indonesia and Papua New Guinea. Now she lives in the New South Wales countryside, between the mountains and the sea, where Christmas happens in summer. She writes legislation, poetry, academic articles, short stories and, most recently, a PhD dissertation (on sex work and sodomy, since you asked).
Next: Snow »
Home | Archive

2 thoughts on “A Good Tradition”