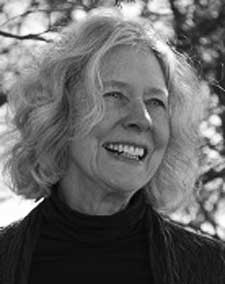 Many years ago, I had the privilege of introducing Naomi Shihab Nye at a local awards ceremony. I described her then as serving like the old-fashioned telephone operator, who spent her days connecting people, plugging in the wires so one voice could hear and speak with another. And connect us all Naomi continues to do. According to William Stafford, Naomi is “a champion of the literature of encouragement and heart.” Praise has come from innumerable places and directions, but one of my favorite quotations about Naomi is from Grand Rapids Press: “Naomi Shihab Nye breathes poetry like the rest of us breathe air. When she exhales, the world becomes different. Better.”

Born in St. Louis, Missouri, to a Palestinian father and an American mother, Naomi spent her high school years in Ramallah and in the Old City of Jerusalem; later she lived in San Antonio, Texas, where she received her B.A. in English and World Religions from Trinity University. Not surprisingly, her work reflects her experiences with cultural differences. “International in scope and internal in focus,” according to Jane Tanner in the Dictionary of Literary Biography, Naomi has, especially since 2001, become an increasingly prominent and effective voice working for peace in the Middle East.

Using direct, unadorned diction, she is adept at “pulling gold from the ordinary,” Mary Logue commented in the Village Voice. As Naomi puts it, “My poems and stories often begin with the voices of our neighbors.” David Kirby praises her for her “good, easy relation with the earth and its peoples.” She has been writing poetry since the age of six, even then liking what she calls “the portable, comfortable shape of poems. I liked the space around them and the way you could hold your words at arm’s length and look at them. And especially the way they took you to a deeper, quieter place, almost immediately.”

Naomi is the author of more than thirty volumes. Her books of poems include Different Ways to Pray, Hugging the Jukebox, Yellow Glove, Red Suitcase, Fuel, 19 Varieties of Gazelle: Poems of the Middle East, A Maze Me: Poems for Girls and You & Yours. She is also the author of Mint Snowball, Never in a Hurry, I’ll Ask You Three Times, Are You Okay?, Tales of Driving and Being Driven and the novels for young readers Habibi and Going Going as well as picture books for children, Baby Radar and Sitti’s Secrets. Other works include the anthologies You Let Me In, This Same Sky, The Space Between Our Footsteps: Poems & Paintings from the Middle East and What Have You Lost? In 2011 she published There Is No Long Distance Now (a collection of short stories) and Transfer (poems). She has been a Lannan Fellow, a Guggenheim Fellow and a Witter Bynner Fellow. Her numerous honors also include a Lavan Award from the Academy of American Poets. In January 2010 she was elected to the Board of Chancellors of the Academy of American Poets.

But citing her honors and publications obscures the heart of this poet’s gift to readers everywhere. As she said in an interview with Kim Rosen, “I have respect for all paths that respect one another.” Naomi’s poems always remind me of the title of her very first book, Different Ways to Pray. “Writing,” she says, “has been a kind of spiritual devotion for me. Listening to language, feeling stories unfold and poems arrive, being present to the page — I do not think of it as a career, I think of it as a devotion.” No wonder her writings connect us so deeply to her, to each other, and to ourselves.

Wendy Barker has published five collections of poetry and three chapbooks, most recently, Nothing Between Us, a novel in prose poems (Del Sol Press, 2009) and Things of the Weather (Pudding House, 2009). Other books include a selection of poems with accompanying essays, Poems’ Progress (Absey & Co., 2002) and a collection translated in collaboration with Saranindranath Tagore, Rabindranath Tagore: Final Poems (Braziller, 2001). She has also published a scholarly study, Lunacy of Light: Emily Dickinson and the Experience of Metaphor (Southern Illinois University Press, 1987) and co-edited (with Sandra M. Gilbert) The House is Made of Poetry: The Art of Ruth Stone (Southern Illinois University Press, 1996). Her poems have appeared in Poetry, Georgia Review, Southern Review and Gettysburg Review. Recipient of NEA and Rockefeller fellowships, she is Poet-in-Residence and the Pearl LeWinn Endowed Professor of Creative Writing at the University of Texas at San Antonio.
Next: Carol Wincenc: Magician of the Flute »
Home | Archive

2 thoughts on “An Introduction to Naomi Shihab Nye’s Poetry”