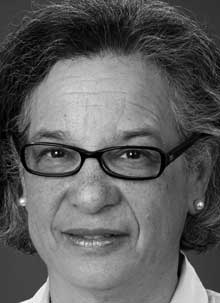 Everyone watched Sara sometimes, but we women couldn’t pull our eyes away. Sara. Even her name was round and open, with no final modesty consonant. She was beautiful in the way girls were then, blowsy and braless. The kind of girl the Beach Boys had in mind when they wished “they all could be California girls.”

At the Veteran’s Hospital on the bluff above the Pacific Ocean, there were no women patients or women physicians on the faculty. There were nurses, and women medical students and a few women interns and residents. The interns and the residents, the house staff, ran the place. I was a first year medicine resident in charge of two interns who watched over two medical students. That was my team: ordinary, hard working doctors in training. There were three other internal medicine teams, one team on call every night. The patients came and went, but the house staff stayed. We ate and slept at the hospital, watching the waves out the window.

Sara was not a typical intern. Her hair was light brown, wavy, sun-streaked. Not long enough to pull back (as though she ever would) but long enough to tumble when she tossed her head. Men from other ward teams positioned themselves close to her when she presented a case, just to watch her hair bounce. And, with luck, her breasts.

She was Jerry’s intern (slim, intense, dark Jerry), not mine. He cut her all the slack any heterosexual man would naturally offer and more. Jerry, a graduate of Flower Fifth Avenue Medical School in Manhattan, knew from books and the street. We overheard him, walking her down the white hall.

“You can’t come to rounds stoned. Think of the students. You just can’t,” he pleaded.

She smiled, so she heard, but it was a smile as far away as her hazel eyes. She picked her way around the veterans in wheelchairs, around the waist-high green oxygen tanks, the way in the song the girl from Ipanema strode down the beach. Her tan glowed under the fluorescent lights. We were certain there were no tan lines under her clothes.

It was the ’70s. The house staff all wore short white coats with the university seal on the shoulder and our names embroidered on the pocket. The hospital issued white trousers to the men, white skirts to the women. We women tried not to take off our jackets, for fear of being mistaken for nurses. None of us were past our mid twenties, but we covered our youth as best we could.

Except Sara. Sara wore sleeveless tank tops like a teenager. Jerry lent her one of his coats for rounds. We watched him hustle her into the jacket each morning. She looked amused at his concern. The coat was too big, but it covered the breasts, breathing under the thin cotton. Fine hairs glinted on her arms where the rolled-up sleeves ended. How taut her skin looked, compared to the skin of our patients.

“I feel like her fucking chaperone,” Jerry complained to us, the women, over lunch in the cafeteria. The food was free with our ID tag and we ate every meal together. (We called the cafeteria the “salt licks” because all the vets on salt-restricted diets came down to load up on chipped beef and pretzels.)

“I’m supposed to be her resident, her boss.” He thought we, as women, would have some insight into Sara. As though any of us, at any position on the team, would dare flaunt ourselves the way she did. On the contrary. We tried to deepen our voices, to be heard and not seen.

Jerry wanted to protect her. We understood this instinct. She was a lioness plucked from the savannah, wandering in traffic. We wore support hose for the long days and closed-toe shoes in case a needle fell. She paraded her bare golden legs and wiggled her toes in her sandals during rounds.

“How did she make it through med school?” we hissed. Jerry shook his head. We answered our own question. She was as smart as any of us and medical school was all about men.

She understood the minimum requirements. She saw all her patients, every day, at least to say hello.

“It’s not that she’s a bad doctor” Jerry said. “She’s distracted.” On the afternoons that she disappeared, we helped Jerry chase down the lab and x-ray results for her patients, and tuck them in for the night. She might not have been a bad doctor, but she wasn’t a good doctor, either. A good doctor doesn’t yield to distraction.

“Where’s Dr. Sara?” the patients asked dreamily. That’s what she called herself. There was no anger in their voices, only regret. When he said her name, the ancient veteran of the Spanish-American war smiled as broadly as the Vietnam vets did.

We could have complained about her behavior to the chief resident, but what could he say to her that Jerry hadn’t? She was sleeping with the assistant chief of medicine, the chief resident’s boss. He was in charge of us and he was the problem. It seemed hopeless. But ever since we have wondered, the way we wonder about the patients we lost in training. If we had been more experienced, we might have found a way.

We understood why the assistant chief wanted to see her naked, feel that down on her arms, the unshaven armpits. We could barely resist Sara’s charms ourselves. We imagined his bald head between her thighs, deep in her sex. Bet he didn’t go down on his skinny wife, the Nebraskan with the flat blonde hair and hopeful smile.

The assistant chief of medicine was ugly as well as  bald. Thick glasses, weak chin. And old. At least thirty-five. He was one of the men who regretted marrying the girl back home before he came to California and all the rules changed. In the Midwest, they figured that Mary Tyler Moore had gone about as far as you could go. Then they met us. They heard we took off our clothes to examine each other. We swam naked with our classmates in mountain lakes. We slept with our classmates. We saw the eyes of the old men on us when we laughed and hugged.

“She’s not thinking” Jerry whispered at the nurses’ station, where we gathered, in their way. “She’s dropping acid, turning him on.” The old guys couldn’t get enough – then they couldn’t handle themselves.

In those days, before AIDS, most of us had dallied in the land of the lotus-eaters. We believed that there was a lethal dose of sex, drugs and rock ‘n’ roll, but we couldn’t find it in a textbook. Jerry, who had the most practical experience, didn’t know. There was no data. We couldn’t drag Sara back to the ship based on our opinion.

We kept quiet. As long as no one spoke, we could pretend nothing happened. We stared out the window at the ocean, wondering what the calm surface concealed.

Every spring, there was a party for the internal medicine house staff at a restaurant downtown. It was a dark, paneled, old-boys room. The faculty came, but the students weren’t invited. Neither were spouses. The best of us drank too much. Our jewelry sparkled in the light from the hooded table lamps. Maybe fifteen women, sixty men. Sara sat next to the assistant chief. His bald head reflected light, too.

The skits were a part of the tradition, from before there were any women in the room. Men played the female parts. It was a chance to make fun of the faculty. Mostly impersonations. We women, bored, wondered why it was considered a privilege to watch men behave like children. We drank more.

Suddenly the atmosphere shifted, the way the barometric pressure drops before a storm, or an elevator falls too fast. They changed the names, but we knew right away. We tried to catch Jerry’s eye, before everyone else caught on. But Jerry had relaxed his guard.

We watched a resident imitate the assistant chief of medicine leering over his glasses as she presented a case. The male resident who played Sara wore a blond wig and tossed his head as he spoke.

“Physical examination was remarkable for an erect penis.”

“Well, it reached the back of my throat.”

Maybe those weren’t the exact words. There was a buzzing noise in our heads that made it hard to hear. We couldn’t laugh. We were sick to our stomachs. The assistant chief of medicine withdrew his arm from the back of Sara’s chair. She ran out.

We followed her into the pink light of the ladies room. We fixed our hair and helped each other reapply the lipsticks we rarely used. We’d been studying in high school when the other girls shared makeup. The crying from the stall – we might have heard that before, if we hadn’t been in chemistry or biology lab all those years. Through the alcohol haze we studied ourselves in the mirror, gaunt with fatigue. We were wound too tight, every one of us, and we had no advice for Sara. We listened to her whimper and we felt ashamed.

We left the bathroom, but we didn’t rejoin the men. We milled around in front of the door, waiting. Finally she emerged, composed. She smiled to see us and we smiled back, shyly. A few of us walked ahead of her, a few behind. We formed a phalanx of women, laughing and talking, like so many sorority girls. When we entered the dining room, Sara was simply among us. We all teetered on our heels and tossed our hair.

She left the program at the end of the year. We pretended that she was like other medicine interns who spun off into specialties like dermatology and radiology, but we knew she wasn’t. We didn’t run into her at another hospital, she didn’t take the boards. We did not think of her because we couldn’t. Each tide of patients swept our minds empty.

The assistant chief of medicine cracked the same corny jokes on rounds. A new generation of students adored him. We were so young, we thought we couldn’t stand it. We were wrong. We were doctors, like him.

Toni Martin is a Berkeley physician and writer. Her second book of non-fiction, When the Personal was Political: Five Women Doctors Look Back was published in 2008. Her work has appeared in The East Bay Monthly, The Threepenny Review, ZYZZYVA and at LiteraryMama.com. She has won fiction prizes from the South Bay Writers and ShakingLikeaMountain.com. Ten years ago, she scaled back her medical practice to write more and is (always) working on a novel.
Next: The Ash Tree »
Home | Archive

7 thoughts on “Sara and Us”