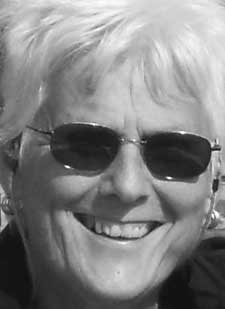 Sorry I’ve taken so long to respond to your last letter. I’ll try to bring you up to speed with us. You got the news we moved, didn’t you? Of course it made sense for us to move into a condo. After the market crashed and most of our other ready cash went up in Iraqi smoke, the big house was too much – a bit too big and too expensive for us to keep. Like you, we do a lot traveling and we can’t work in the yard during the day even when we are home. Rafe, our old gardener, went with the new owners after the sale, so not having to keep up the grounds made a condo seem a reasonable compromise for us – more than reasonable.

We had to make some modifications to the place. The contractor resisted certain alterations I wanted, but with some special persuasion I convinced him: “Yes, what I told you is exactly what I want you to do.“ And “Yes, I want the work done to the specifications I gave you and I don’t care if it doesn’t meet code.” A few extra bucks to fake the building permit, a special smile, the usual way we all must deal with the trades.

The transaction was pretty much turnkey. Put on your garage sale, pack up what you want, and put what’s left at the new place. This residence is more compact than the old one, less than half at 3000 square feet. We were lucky to get such a lucrative deal for the villa – not too many want so large a home because of the servant issue. We don’t even need full time help now – what a relief!

Some of the pieces in the estate we’d had for generations. We turned a dandy profit on them, mostly the ugly ones – and good riddance, too. Some we sent to old friends or the children. Several of our offspring are still around, but I think I mentioned where they lived in an earlier letter. Oh, by the way, I sent the Elizabethan armoire to you. Heavy bloody thing. I hope the delivery service didn’t damage it.

The condo is an interior unit and fortunately quite dark anyway, which made getting drapes and shutters a little easier. The only room we put any extra effort into was our bedroom. The first floor, where the kitchen and living room are located, we didn’t much touch since we don’t need to cook. The enclosed courtyard outside the building couldn’t be better – a heavy wooden lattice thing completely overgrown with wisteria covers the whole area. Totally shaded. When I think of how much we had to do to darken the old house, well, you can imagine.

We shut off our bedroom when we have the help in. The third floor windows are small, so all we needed to keep our sleeping area tight and tidy was to cover them with wallboard. I influenced a local talented artist to paint over the space – you’d think the drapery was real. What a shame we still need to take care to keep up appearances. This old girl is not about to clean, so we made the extra effort. Can’t be too careful with outsiders, can we?

We’ll need to put in our basement with no permits so no record exists to alert the wrong people. Once the basement is done, the cleaning lady can clean all the rooms and we won’t have to worry about someone disturbing us during the day.

We’ve met most of the neighbors and I think they are used to our odd hours by now. When we first moved in, we were introduced to a couple of guys who work graveyard shift at the mental hospital. I still find myself chuckling when I hear them use that term! Anyway, now that we’ve been here a few months, we’ve been able to tell some of our friends about the complex – I think you met Monica and Gomez when you visited a few years ago. Long and short, I guess we talked up the condo lifestyle so much we convinced quite a few how nice living carefree can be; we’ve got six units owned by night people now. We’ve been having a wonderful time – really enjoying ourselves having so many neighbors on the same schedule as we are – parties and socializing constantly.

The friendly folks who live next door keep us up to date with what happens during the day. We’ve always been good neighbors. I’ve taken to stocking coffee and some of those sweet cookies for when they stop by. Would you believe I learned how to operate a coffee pot?

One of the things they constantly complain about is the home owners’ association board. To be honest, until we moved here I didn’t even know such a thing existed. In case you haven’t any experience with them either, a homeowners’ association is another way of saying just a few of the people who live here, called the board, make decisions for everybody. Wait, it gets worse – what they are supposed to do is decide things like whom we hire as a gardener, who picks up the trash, etc., but according to the Markleys – our next door neighbors – it sounds like these folks are as bad as the council of nobles we dealt with back in the old country or Congress in this country. Once they get a little bit of what they see as power, they try to push some kind of personal agenda. Ben Markley said some of them were OK, but a couple were so old, they had trouble remembering their own names and a couple “were on the power trip from hell.”

Once a month they meet in what’s called a Board Session. I went once to see if Ben was stretching the truth. Reggie wasn’t too keen on me going out so early, but I bundled up and put a big hat on, so I was ok. Bottom line – no exaggeration, let me tell you. One woman Ben had mentioned, who seemed to think everyone living here needs to march to her tune, was pushing a list of rules more arrogant than King John’s!  Even the way she moves is haughty and self important, her head off to one side as if she smelled something bad. Ben, it seems, is a master of understatement. Apparently, she dominates the others on the board, gets work done for herself and her friends – which means less for others. If someone makes her angry, she finds a way to get them fined.

The night folks were all going on a cruise the next evening – one of the couples has a fifty-five foot boat they call Stoker’s Dream – and I was telling them about the board and this woman. I’d asked Ben how these particular individuals became part of the Board. “Most of the time, they’re elected in the spring. Once in a while, a replacement is appointed to fill out a term for someone who can no longer serve. Pretty much the same thing either way,” Ben said. “Bunch of cronies putting some more just like them on.” I passed this on as well.

“Spring is out,” said Monica, “we’re into fall now – which means six more months of this harridan.“ (I just love the words she uses, I hadn’t heard that term for I don’t know how long.)  “From what you say, none of us will put up with her for long.”

No disagreement from me or from any other the others. No one else is comfortable going out quite so early in the evening, so I was appointed to fill her spot. Reggie gave me the evil eye again, but what’s new!

Ben and Nan stopped by and I shared how we planned to proceed with the unpleasant person making decisions for us. “Lots of luck,” Ben said. “Usually they have to die before they give up their spot.” He looked at me funny when I said, “Let’s hope it doesn’t come to that.”

We chatted for a while, and they had their coffee; Ben filched three more of the cookies his wife won’t let him have. After they left, I decided I should write you, way overdue to correspond. OK, you’re right – I’m procrastinating going over to her place. I am usually pretty persuasive and can get someone to do what I want them to do, but this woman … Martha, this woman is something else. The thought of even a sip of her turns my stomach … might corrode my tongue!


Have to go, I’ll get this in an envelope and fill you in on how it goes in my next letter.

Best to all and give Vlad a kiss for me,

Minnesota born, resident of both coasts and points in between, Sue Kesler currently lives in California’s Napa Valley. Her writing experience includes stints as assistant editor, copywriter and freelance editor of a corporate in-house publication. Her non-creative professional life included real estate, insurance, and banking. She is completing her second novel and has the framework for a third, coincidentally in the categories above.
Next: Weaving Lesson »
Home | Archive

One thought on “The Neighbors”