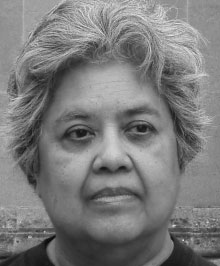 The nurse came in with a metal bowl full of white foam that made me think of meringue. I was hungry; I’d been in labour for twenty hours. She was cheerfully professional, which was a welcome attitude. She proceeded to my nether regions without explaining that she would be lathering it up and I imagined service men at a lull in the war squinting at a sliver of a mirror shaving their beards with rusty razors. What the deuce, I thought to myself. I blushed at the word vagina, let alone letting someone I didn’t know touch it, nurse or whatnot. It was the birth canal, that’s what it was, and Sister Mary Joseph said it was a sin to touch ourselves so we good Catholic young women didn’t even think it existed. Anyway, this meant surely the baby was coming now if we’re having to super clean up the area. She was such an expert I hardly felt the sting of the razor and it was all over quite quickly. Cool, fresh air entered my body. Relax, she said with a smile, as if she’d seen her share of twenty-four-year-old mothers-to-be a mile a minute.

The pain started again after the diversion. Ride it, I told myself. There was no one to hold my hand or go coo coo on me like in the movies where relations, preferably the mate who spermed the situation, wiped the sweat off one’s hot forehead. Good thing I had been reading Suzuki’s Zen book and I could talk myself into riding out the pain.

I looked around the gleaming maternity room all sterile and industrial and saw The Idiot with its really bad translation – it was ponderous and tedious and up to now seemingly pointless; I hadn’t finished reading it, but it had to be read anyway, as it was Dostoyevsky – sitting placidly on the bedside table with a kidney-shaped metal pan and a glass of apple juice with a glass straw from last night I couldn’t finish.

Six months ago Cousin Millie, same age, drove herself to the hospital as her water broke, through Chicago traffic at night. Her partner couldn’t marry her because he was already married, so brave soul did it all on her own; what was I complaining about? At least I was dutifully married, scared as I was that my parents would disown me for becoming pregnant single. The shame, the shame, what would their friends say? Gerry, the spermer, at least drove me to this one small hospital in our small town before he went home to sleep as he had to get up early to drive a visiting prof to the airport.

I tried distracting my thoughts from the canal – I wonder what the fascination is on this that made the priests go a-trembling like Wilkie Collins’ shivering sands – by thinking of the other parts of my body. Except all the other parts were sinful as well, the overstretched breasts, the bulging buttocks, every part of my flesh was apparently too willing even as my mind said no. I said no that night but Gerry pushed on, ignoring my pleas, and I thought but he is a colleague, a friend, who would give me lifts to my apartment from the university, spend time in my office between giving lectures and seminars, nice all-around guy, why was he doing this? Then I became afraid and submitted.

When the baby squeezed the bejesus out of my guts, I thought I could have aborted it but I was terrified of God’s wrath, this pain was nothing compared to the fires of hell. Its life ended mine. Life for a life. I could see the years folding up like a stark white origami bird about to fly off into the sunset, its paper-skin soiled and crumpled and lightweight so wouldn’t make it across the sea without falling apart and falling, falling in mid-flight.

Of course, I would take care of it, what did the Indian philosophers say about women: they are vessels through which a child is born; there’s that fascination again with the birth canal like that’s all there is to a woman, so I’m responsible for bringing this child out into the world. When it asks for food, I’ll give that. When it asks for money, I’ll give that. Then when I’m old and living on the poverty-line Canada Pension Plan and it demands more food and money than I’m able to give, it will be angry with me and say, “fuck you,” because I’ll be vulnerable then to elderly abuse and I’ll be frightened. I’ll think this child, and it will be a son who will be like his father, will kill me in the middle of the night if I don’t give him what he wants.

Lakshmi Gill, born in Manila (Punjabi/Spanish-Filipina), has published in North America since the mid-1960s. Some of her books are Novena to St. Jude Thaddeus (poetry), The Third Infinitive (a novel), Returning the Empties, New and Selected Poems: 1960s to 1990s. She has published in anthologies in North America and India, and literary magazines in Canada, USA, Ireland, Australia, India, Hong Kong, and the Philippines; her work has been translated into French. Along with Dorothy Livesay, Gill is one of the only two women amongst the founders of the League of Canadian Poets in 1966; she is a current member of The Writers Union of Canada.
Next: What Choice Do We Have »
Home | Archive