Birthday No. 61
by Becky Boling 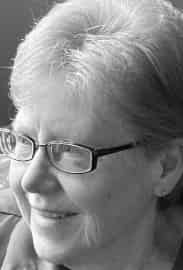 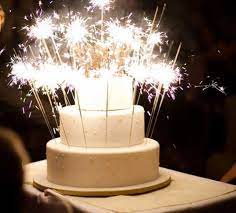 Scene in a Restaurant. Take One.

The candle would not go out. She could tell that it was one of those trick ones, a sort of congratulations with a nasty chuckle attached.

A hot fudge sundae, that’s why she had chosen this particular restaurant for after the play. Mistake to have mentioned her birthday to the maître d’. Silly vanity at her age.

They had ordered the soup, mostly to justify the dessert they had both planned to cap off the evening’s festivities. It would be the final treat of the day, at nearly eleven o’clock, after the play at the Guthrie and before returning to the hotel room. A night away, up in the cities, out on the town, a splurge for their small-town lives.

The waiter didn’t try to hide what he was doing. Five tables away, at a counter, he was involved in preparations. Just minutes before, she had seen a different slice of red velvet cake, candle sparking like a firecracker about to explode, on its festive way to another table. It seemed to float down the rows, zigzagging past other couples and groups, a scintillating fireworks show, until it reached a young couple. The woman, whose obvious delight revealed her as the celebrant, was probably no more than in her late twenties or early thirties. Across from her, of a similar age, sat a husband or lover, eager to take credit for the restaurant’s courtesy. Mere children they were, half her age, just beginning, just getting started.

What plans might they have after sharing their complimentary treat?

Next in line, her own wedge of red velvet with its cream cheese icing, its thin tapered trick candle, waited for the waiter to light the wick. A white napkin tossed expertly over his forearm, the waiter lifted the plate. Maintaining the perpendicular line of the candle, he approached with a mortician’s gait.

She heard herself muttering, sotto voce, no, no, no, no, I don’t want that, even before he assumed his station beside the table.

Her husband cringed, his entire neck collapsing inside his collar. A turtle move if ever there was one. He hated when she acted up in public. He disapproved whenever she complained, whenever she challenged or even questioned a salesperson, a waiter, a waitress, the painter who worked endlessly on their house, the guys who cut the grass or plowed the snow, the clerk at the DMV, any person at a cash register or behind a counter.

Unaware of her reputation for verbal smiting, the waiter finished the last bars of the birthday song, with an operatic flourish, and set the dessert – that she had not ordered and did not want – on the white placemat between her closed fists.

How many times a night did this man have to work his face into the smiling mask that mocked friendship and resembled the glee of a serial killer?

Well, he would get a good tip. Her husband would make sure to throw in extra for whatever bad behavior, lack of appreciation or enthusiasm she displayed for the free dessert.

She didn’t much care for cake, had tried them all, often giving in to the pressure of custom, and agreeing to the chocolate, the marble, the carrot, the trés leches, or the bundt, despite not being a cake person. She also hated the smell of candles when they turned to smoke.

Attentive, the waiter waited. The props were in place. A performance was expected. After all, it was her birthday, and she had the main role. The secondary characters knew their lines and had done their parts well. At 61, she should know the script backwards and forwards. Heaven forbid that she miss her cue now, this late in her career!

But a surprise was what she wanted. Not custom. A divergence, something to make the stock celebration her celebration. She had looked forward to the hot fudge sundae all day. The restaurant made their own whipped cream and fudge; the ice cream was seriously thick and creamy. Each spoonful took her back to first pleasures, a frisson of infant delight, a hint of birthdays new and amazing.

She did not want a slice of cake. No matter how thick the icing, how moist each layer. The restaurant had hijacked her birthday and was holding it ransom.

She tore the dry seam that had grafted her lips together, relished the sting, and sucked in a deep breath. She pretended to blow out the trick candle, chuckled when the sparks persisted, thanked the waiter, and smiled at her grateful husband whose head began to emerge from his collar.

What a lovely surprise, she said, as she slid the cake across the table to her husband and asked the waiter to bring her a hot fudge sundae with extra whipped cream.

Please, she said, as the final touch.

This is how a slice of red velvet cake nearly hijacked my 61 st birthday wish. It’s also a slice of my marital comedy of errors.