Even more amazing to me than Mitt Romney pretending he didn’t know when his wife’s horse was scheduled to perform in the Olympics are the physicists who pit Science against Religion. Haven’t they heard of wave/particle duality, the phenomenon in which a photon can manifest as a particle and as a wave? Call me crackpot, but as far as I’m concerned, it’s the same thing with Science and Religion. Here’s my proof:

Recently, I confided in a rabbi friend my favorite childhood fantasy: a horse race where all the horses come in at the same time. She said: “Your sense of justice is pathological.”

Picture a probability wave — or, if that’s too hard, do what I do: picture the Wave at a ballpark. In every Wave at every game I’ve ever been to, there is always one person — OK, me — who refuses to take part. It’s not that I’m anti-Wave, but I always seem to have my hands full of a Slurpee and nachos at the moment my turn comes to stand and wave my hands about in the air, risking not only the loss of the Slurpee and nachos but the wrath of the person in front of me who is now Slurpee-and-nacho bedecked.

But the more I don’t stand up, the more my sense of identity is caught up in not doing so. I become the person-who-doesn’t-stand-up-in-the-Wave. Soon it becomes a matter of pride; I vow never to stand up. At this point in phase space — the probability Wave — I represent zero possibility.

But in reality — quantum reality — there is no such thing as zero possibility. In my seat in the bleachers, I could receive a phone call telling me I’d won the Nobel Peace Prize, causing me to jump up and flail my arms about wildly at the very moment the Wave came around to me. See what I mean? It could happen!

Just to make sure I’m right, I call my friend Danny Hillis, an actual (computer) scientist and acknowledged genius (and not just by me). After some rigmarole about “infinitesimals” (a word Danny usually knows better than to use around me since it causes my eyes to resemble those of rabbits hanging upside down outside the butcher shops in Chinatown) Danny agrees cautiously that, given the right time frame — like, say, a hundred billion years — a race such as I describe could theoretically — i.e., mathematically — happen. But, he goes on to ask, do I know what the math is called that offers such a possibility? Not waiting for me to come up with the right answer — for which there is zero possibility — he says, “It’s called a pathological function.”

Q.E.D. Neither religion nor science offers much in the way of solace.

But wait — there’s more. When Danny kindly went on to explain that in math, pathological doesn’t mean bad, it means out of the ordinary, I had an epiphany. Not that I needed Danny to tell me I’m out of the ordinary — I’ve got Family Feud to tell me that — but, finally, I understood what he and the rabbi were trying to tell me: that if there were a horse race in which all the horses came in at the same time, I’d be the only one who liked it! Everyone else would hate it. Indeed, Danny says, they wouldn’t stand for it. They’d find some criterion on which to base a winner — just like they did, says Danny (who is not without a sense of irony) in the Bush/Gore election.

Imagine my fantasy race where the horses come streaming down the field, some stragglers, some leaders, then suddenly at the finish line a dead heat! It would be the most amazing thing you’d ever seen. People would talk about it for years.

But a year or two later, could anyone except racetrack devotees remember the name of a single horse? It would be the race that was memorable, not any one horse; the phenomenon, not the individual. That is so not the American Dream, at least not the American Dream as revamped for the 21st century — let’s call it the A.D.A.D. — which demands that we distinguish ourselves from the pack. In lieu of the house with the white picket fence, we want Celebrity! Like the title song in the movie Fame: “I wanna live forever, people remember my name!” (By the way, can anyone remember the name of a single person who was in that movie? Point proven.)

Just as Space needs Time to be complete, however, Fame needs Fortune. The “that” in “That’s what makes horse races” means reversals of fortune — winners can lose; losers can win. It most definitely does not mean everyone can win… which is of course what would happen if all the horses came in at the same time. Would the bookies of Capitalism — the venture capitalists, the New York Stock Exchange — stand for “everybody wins” any more than the bookies at the actual race who would have to pay out on every single bet? Would even the penny-ante bettors who stand to win something stand for losing, in exchange, their animating dream of the Big Win?

And then I remembered something else. The whole fantasy of a race in which all the horses came in at the same time was sparked by an ad I’d seen in The New Yorkerwhen I was eight years old. The ad, for Belmont Race Track, featured a picture of an adorable, ungainly colt. Underneath the text boasted, “By the time this colt is one year old, we’ll have trained every natural instinct out of him except one: the urge to win.”

I was appalled by their self-congratulatory tone. Not only were they taking it for granted that eradicating all other natural instincts was good, but they assumed anyone reading the ad would share their point of view. And what my rabbi friend and my scientist friend were both trying to tell me is… they would have been right.

Thanks to Free Market Fundamentalism, we’ve moved beyond wave/particle duality. We’ve turned science into a religion, re-writing Darwinism as Dar-WIN-ism, focusing only on competition (the urge to win) at the expense of the other natural instincts (like cooperation). We’re indoctrinated from birth into a belief system that ruthlessly evicts notions of sharing or nurturing or looking after anyone but Number One. Every natural instinct is trained out of us, except the urge to Win Big. The ad for Belmont Race Track — which, like any racetrack, is all about believing you can win big — was an ad for the American Dream.

So really, who’s pathological? Me or Capitalism? 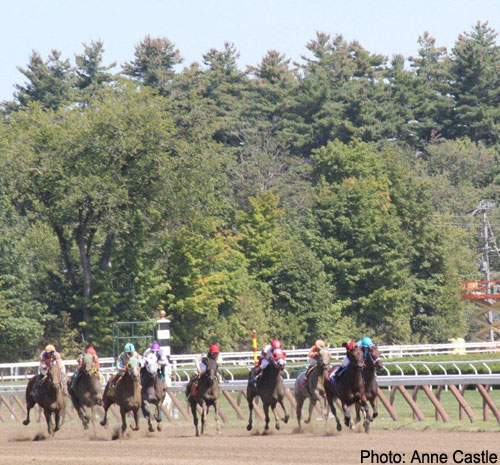 Emily Levine does for science what Jon Stewart does for news: she critiques it, she makes it relevant and she makes it funny. Levine is currently in post-production on “Emily @ the Edge of Chaos,” a film that asks: “What’s wrong with America?” “What can one brainiac comedian do to help?” And “If a movie that explains science with Al Gore made $24 million, how much more money could a film that explains science with jokes make?”