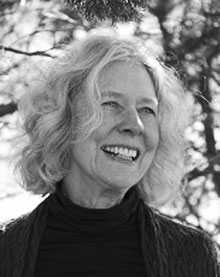 There are people whose poems come from their throats, or from swelling lungs releasing into sound. Joy Harjo’s poems come from so far down they seem to emerge from the soil under our feet, from bare earth before it’s been asphalted or concreted or polished-oak-planked. They come from muscular tissue formed from red clay and the waters from thunderstorms. Earth and body: the earth our body, our body the earth. And sky. Yet Harjo’s poems—while elemental in that they rise from the elements—are never simplistic, never one-dimensional.

As Greg Sarris puts it in his Introduction to She Had Some Horses (1983), “For Joy the world is timeless, and any present situation or predicament, whether healthy or not, cannot be extricated from the past that has borne it and continues to inform it.” “Every family has a story,” says the poet in an interview with Cassie Premo Steele, adding that she believes in the power of writing to tell the truth—and that, in doing so, the writing “creates the truth; it gives us a memory on which to build.”

A significant voice in the rejuvenation of indigenous culture, Harjo is a member of the Muscogee (Creek) Nation and is also of Cherokee descent. She was born in 1951 in Tulsa, Oklahoma and moved to Santa Fe as a teenager to attend the Institute of American Indian Arts High School. She completed an MFA in Creative Writing at the University of Iowa in 1987. Her  many collections of poetry include Remember (1981), The Last Song (1975), What Moon Drove Me to This? (1980), The Woman Hanging From the Thirteenth Floor Window (1983), She Had Some Horses (1983), New Orleans (1983), Secrets From the Center of the World (1989), In Mad Love and War (1990), Fishing (1992), The Woman Who Fell From the Sky (1994), A Map to the Next World (2000), and How We Became Human: New and Selected Poems, 1975-2001 (2002). She has also edited (with Gloria Bird) Reinventing the Enemy’s Language: North American Native Women’s Writing (1997), and published a children’s book, The Good Luck Cat (2000). She is author of the film script Origin of Apache Crown Dance (1985), coauthor of the film script The Beginning, and is author of the television plays We Are One, Uhonho (1984), Maiden of Deception Pass (1985), I Am Different from My Brother (1986), and The Runaway (1986). Her work has been included in dozens of journals and anthologies. Harjo is also a musician, a saxophonist who has produced several award-winning albums. She has taught at the Institute of American Indian Arts, Arizona State University, University of Colorado, and University of New Mexico.

Her many awards for poetry include the PEN Open Book Award, the Muskoke Women’s Leadership Award, the Eagle Spirit Achievement Award, the Arrell Gibson Award for Lifetime Achievement from the Oklahoma Center, the Oklahoma Book Award for Poetry, two National Endowment for the Arts Creative Writing Fellowships, the Lila Wallace-Reader’s Digest Fund Writer’s Award, the New Mexico Governor’s Award for Excellence in the Arts, the Bravo Award from the Albuquerque Arts Alliance, a Witter Bynner Poetry Fellowship, an American Book Award, and the Delmore Schwartz Memorial Award. Her poems have been featured in two Pushcart Prize Poetry Anthologies.

Her newest book is Crazy Brave: A Memoir, about which Honor Moore says “Here is the life that brought Joy Harjo to poetry—a life in which ‘crazy’ means close to necessary risk, close to herself, close to prophecy, and close to love. This book reminds us again that poems are not luxuries and that coming to them can offer not only grace but survival.”

Leslie Ullman in the Kenyon Review comments, “Like a musician, Harjo draws power from overwhelming circumstance and emotion by submitting to them, celebrating them, letting her voice and vision move in harmony with the ultimate laws of paradox and continual change.” Adrienne Rich turned and returned, she said, to Harjo’s poetry for the poet’s “breathtaking complex witness and for her world-remaking language: precise, unsentimental, miraculous.”

As Harjo says in the conclusion of “Crazy Brave”:

To imagine the spirit of poetry is much like imagining the shape
and size of the knowing. It is a kind of resurrection light: it is the
tall ancestor spirit who has been with me since the beginning, or
a bear or a hummingbird. It is a hundred horses running the land
in a soft mist, or it is a woman undressing for her beloved in
firelight. It is none of these things. It is more than everything.

Throughout her work, Harjo refers to “the knowing”—a way of being open to the world with all its odors, sounds, sights, landscapes, bruisings, dreams, caresses, nightmares, weathers, memories, animals, birds, histories. Her poems do that for us: open us to a knowledge that, in “normal” language, we can’t begin to reach.

Wendy Barker has published five collections of poetry and three chapbooks, most recently, Nothing Between Us, a novel in prose poems (Del Sol Press, 2009) and Things of the Weather (Pudding House, 2009). Other books include a selection of poems with accompanying essays, Poems’ Progress (Absey & Co., 2002) and a collection translated in collaboration with Saranindranath Tagore, Rabindranath Tagore: Final Poems (Braziller, 2001). She has also published a scholarly study, Lunacy of Light: Emily Dickinson and the Experience of Metaphor (Southern Illinois University Press, 1987) and co-edited (with Sandra M. Gilbert) The House is Made of Poetry: The Art of Ruth Stone (Southern Illinois University Press, 1996). Her poems have appeared in Poetry, Georgia Review, Southern Review and Gettysburg Review. Recipient of NEA and Rockefeller fellowships, she is Poet-in-Residence and the Pearl LeWinn Endowed Professor of Creative Writing at the University of Texas at San Antonio.
Next: Twelve Poems »
Home | Archive

One thought on “An Introduction to Joy Harjo’s Poetry”