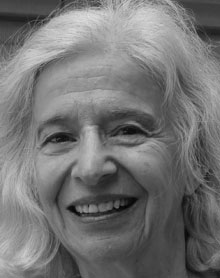 When my husband came home from the hospital and from rehab, we had to learn to enjoy life again. He could no longer move about without a walker, and his pervasive arthritis cast a pall on the simple pleasure of walking. During the winter months, a visit to a theater or a museum was a rare event. There were fewer party invitations. Fortunately, we both enjoy solitude. We rejoice in our many-windowed living room on Riverside Drive from which we can observe trees—near and distant.

Twenty years ago, when we were each in our sixties, we met through a slim ad I had placed in the New York Review of Books. He was caught by my words keen on poetry. Poetry is an abiding link between us. I am my husband’s caretaker, the keeper of our house, the tutor for several special students, and the sometime poet. I rise each morning hoping I will rise to the occasion of the day. I do not always succeed.  One morning after some bleak early February days, as I was returning from an errand I noticed a tree that gave out uncommon joy. The rain had just stopped. I paused to understand whence came the joy:

The next morning after the usual exercises, I saw from my bedroom window:

When I went outside in the days following, splendid trees on Riverside Drive would call out to me, and each time I would respond:

you teach me
bare tree—how to contort
gracefully
tree in mid-dance
who else will soar
in your bare arms?

When the winds took over, the company of trees was heartening:

After an all-day conference on dyslexia, a handsome tree awaited me in Washington Square Park:

At home at a long and solemn breakfast:

twiggy branch
nodding at the window
bless our silent meal

Twenty-six haiku days later, a sense of closure came one moment on Broadway:

My husband would drop whatever he was doing and listen to the haiku I had written that day. I would hear in his voice the degree to which he had been moved. As I revised, I’d realize how right were his judgments. His own artistic work had been in singing and his parents were poets. Perhaps that is why he was quick to grasp small changes in sound and rhythm.

In the midst of this cherished time, one night he took an extra dose of Ambien. A mistake. At five in the morning, I found him in the living room with his clothes scattered about and everything in disarray. His walker was jammed in the narrow bathroom doorway; he was on the floor with one arm holding the seat of a swivel chair that he had been using to navigate. When I helped him up and managed to wrench his walker loose, he took it over and headed off toward the front door in a futile search for his bed.

In the afternoon, the pounding in my heart that had begun in early morning was still there – it frightened me and I erupted in fury about the pills. I left the house, dreading to come back. When I did, I walked cautiously down the long hall to our living room and found him in the kitchen. He was sitting at the table, with a pad, pencil and a serene smile. He offered me the pad on which he had written tankas—the five-line Japanese poem, a predecessor to the haiku. A look of wonderment was on his face; he had written only a few poems in his life. Now there were seven. This is the one he likes best:

He has cut the pills in half. Tonight only one half is left. He tells me he may stop taking them altogether.

Janet Brof is a poet and translator whose work has appeared in Bomb, New England Quarterly, New York Quarterly, Aphra, and Negative Capability among other literary magazines. She is co-editor of Doors and Mirrors: An Anthology of Spanish-American Fiction and Poetry, 1920-70; Grossman/Viking, 1973.
Next: My Snake »
Home | Archive