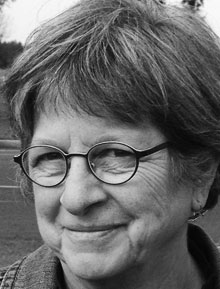 I glared at the invitation from my alma mater. I did not want to dress “French” for the alumnae dinner just because it fell on Bastille Day. My friends would adorn themselves as Madam Pompadour, Marie Antoinette or the Scarlet Pimpernel. If they didn’t dress up they would dress clever. I imagined Mary arriving as Marat, tugging a bathtub behind her. My style would be more like Madam Defarge knitting and counting heads beside the guillotine. I was a competent knitter. I could scrounge up a dowdy skirt, peasant top, and mobcap to perch on my gray hair. I could even pack a papier-mâché head in my suitcase.

I brooded. Dressing like a peasant was the historical equivalent of wearing my daily uniform: blue jeans and a plain tee shirt. I fingered the invitation. Did Defarge secretly want to wear silk? I wondered. Would it be possible to stage a revolution and break free of my own sartorial prison? Did I own anything French?

Indeed I did: a French brassiere, tucked away in the far left corner of my underwear drawer.

The black and red paisley brassiere was as beautiful as it was enormous. When I first saw it displayed in the store window, I was entranced by its black lace edges, silky cups, and straps embroidered with tiny pink rose buds. A black bow nestled between the cups. Its size promised that even I, a big-breasted woman, could look beautiful in my underwear.

I had a Proustian flashback – as if I had bitten into a bitter Madeleine.

“You don’t wear a bra? With breasts that big!” the sales lady said as she glared at my body. My mother and I were in a cramped, airless dressing room at Bullock’s Westwood. My mother had settled herself into a chair in the corner.

My breasts aren’t that big, I thought. I’m not even ten years old!

I had refused to accept that my body was changing underneath my simple cotton blouses with Peter Pan collars. I pretended the thin, translucent cotton was opaque, making my body invisible. This denial created a surreal self-image: instead of a solid torso of chest and belly, I imagined an empty space with my arms and legs floating on either side.

I forced myself to look into the mirror. The last time I consciously looked at my body, I was flat-chested. Now, I had breasts. Big breasts with dark, upstanding nipples. I took a step towards my mom. She hoisted her big pocket-book off the floor and plopped it down where I longed to be, in her lap.

“Why didn’t you tell me you needed a bra?” my mother asked.

What word would I have used to tell my mother about my changing body? I knew the word “breast,” but in our house that was a reference to white meat chicken. My friends used the word “titties” to refer to the tiny bumps beneath their undershirts. “Boobs” was not a word my mother would associate with a body part; she would think I was talking about a group of stupid people.

Born in 1910, my mother was old enough to be my grandmother. “I dislike the word six. It sounds so much like sex,” she told me once. Casual words for body parts and functions were not her forte. The closest she came to slang was a word she pronounced boosum. When I asked her what a boosum was, she replied, “A woman has a boosum and a man has a chest.”

I couldn’t imagine  telling my mother that I had a boosum.

The sales lady moved in front of me. Her black buxom figure filled the three mirrors, blotting out my image. She faced me, her breath smelling of cigarettes. I took a step back. A white cotton brassiere dangled from her stubby fingers.

“If you don’t bend over, we can’t get this brassiere under those big breasts of yours.”

“Have you ever tried on a foundation garment before?” the woman asked.

I shook my head.

The sales lady handled me as if I were a doll, sliding the straps over my shoulders. I felt wooden, numb.

“Bend over,” she said and this time I obeyed.

My breasts swung forward, dropped and hung like two grapefruits. Not the small ruby-red kind that fit in your hand. My breasts were the extra-large Florida-pink variety. The sales lady slipped the cups under me, caught my breasts in the brassiere and shook them into place. Finally she hooked the stiff band across my back with three metal hooks.

She slid a thick finger underneath each shoulder strap tightening both sides, pulled the bra down under my arms, stepped back and surveyed her work.

“Now you are ready to try on school clothes.”

She turned and squeezed out of the dressing room. My mother followed her. I stayed there alone as my image reappeared in the mirror, trussed up in the bra. My breasts were even more disturbing as they jutted out from my body in their new wrapping. The lower part of my body revealed a girl in pedal pushers and sneakers, one foot still in summertime. The upper part was the body of a woman, crowned with the head of a child. I thought of pictures  I’d seen of ancient Egyptian gods, the sort that were half human, half animal.

How am I going to walk around looking like this?

After two children, two marriages and a couple of decades, my breasts had swelled to a triple-D size. When most women were going wild for silicone implants, I inquired about breast reduction surgery. My doctor described the reality of major thoracic reconstruction. “I watched a breast reduction surgery, “ she told me, “and it was brutal and bloody. Even for me – and I’m doctor.”

I resigned myself to bra-strap grooves in my shoulders and daily backaches.

I continued wearing  my gigantic white bras until I saw a post card that challenged me. The card read: If you want to change your life, begin with your underwear. I was intrigued. I threw away my plain white cotton hip-huggers and bought seven red bikinis. But after six months I was still stuck in the same job, the same town, with the same partner. Then I saw the big beautiful paisley French bra, languishing in the window like Manet’s Olympia.

My first bra had changed my life. Could that French bra make me feel beautiful, or if not beautiful, happily voluptuous?

Begin with your underwear. The voice had a sense of urgency. It challenged me. All right! I promised myself, I will  try on that beautiful brassiere.

I stepped into the lingerie store. A tiny pink fan whirred. A delicate whiff of Chanel Nº 5 enveloped me. I smiled. The walls, festooned with bras – all shapes, sizes, and colors, each decorated with lace, rick-rack, picot trim, frills, ruffles – amazed me. Every inch of space was devoted to the most beautiful brassieres imaginable. I had never seen a store like this. For a moment I panicked. What was I doing here?

The night of the alumnae dinner I began to dress early. I pulled my hair back in a French twist and dabbed  Chanel Nº 5 on each wrist. I stripped off my baggy T-shirt and dropped my stretched-out 42-DDD rag to the floor. Holding my breath, I slipped into the soft black and red silk. I stood taller, and felt magnificently large. This bra was perfectly balanced, an engineering masterpiece. In the mirror my body looked sculpted, voluptuous. Looking back at me was an Amazon, a goddess, who couldn’t stop smiling.

Then I heard my mother’s voice, Heavens, girl, cover yourself up!

I rubbed my sweaty palms together. My mouth went dry. What was I thinking, trying to be big and beautiful?

I pulled a white overshirt out of the closet, slipped it on, secured the three mother-of-pearl buttons. The bra vanished.

The dining room was filled with costumed women. My paisley balconette was invisible as I once believed my budding breasts were beneath my cotton blouses. I strolled around the room, amused by the peasants in three-cornered hats and several Marie Antoinettes, including one sporting a tiny Eiffel Tower atop her towering blonde wig. The costumes inspired me. Why had I worn the bra, if I wasn’t going to show it off?

In a quiet corner I undid the buttons and let the shirt fall open a few inches. Then I began my second circuit of the room. “What have you got on?” my friend Mari asked. I stood up straight, my breasts on guard. My heart pounded. You can do it, I thought, sweeping aside the lapels of my shirt. The circle of faces lit up and eyes widened.

“Oh!” everyone gasped, “You look beautiful; you’re so BIG!”

“You’ve got ovaries of steel, woman!”

“That bra is fantastic.”

“Why have you been hiding those breasts all these years?”

Late in the evening, Bella, another friend, approached me. “Can I ask you a question?”

“May I lay my head on your breasts?”

Her request felt so innocent and pure I immediately said yes. She moved close to me, closer than anyone else had come that evening. She put her arms around my waist and gently laid her head where my breasts mounded up out of the bra. She breathed a soft sigh and rested there for several minutes, her cheek against my flesh. I felt her warmth.

“I used to do this with my grandmother,” Bella explained. “Laying my head on her breasts was so comforting, so safe. I just wanted to experience that again.”

I began to breathe more slowly. I felt my body exuding comfort rather than being an object of sensuality.

We hugged each other and went our separate ways. As I watched her  disappear into the crowd, I was in a daze.

Returning home, I knew something had happened to me; I didn’t know exactly what. My life continued as before – same job, same partner, same routines — but once a week I’d slip into my French bra, wear it under my T-shirt and recall my friends. They had embraced and accepted me! Had they changed, or had I?

I recalled my grade-school girlfriends laughing while I fought back tears. They ran off to jump rope while I walked the perimeter of the playground. That’s when I began isolating myself from other girls and women. Until now:

I’m beautiful and big. My breasts are comforting and delightful pillows filled with warmth and love. These new thoughts began to overpower the old voices and memories. My mother’s Victorian chastisement, the bra saleslady’s tart tongue and above all, the hurtful laughter of my elementary school friends faded.

I had felt the warmth from a circle of female friends who loved all of me, not just the carefully presented part but the  complete me, with my big breasts, my sensuality, my beautiful bra – and my vulnerability. I felt accepted and nurtured in a way I’d longed for since I was nine. And it all happened because I decided to change my underwear.

Patty Cogen’s favorite authors include Mark Twain, E.B. White, and Joan Didion. Over the years she has written essays on topics ranging from politics to parenting. Patty’s book, Parenting Your Internationally Adopted Child, was published in 2008. Patty is a retired child and family therapist currently residing in Port Townsend, Washington. She recently went on an anti-inflammatory diet, which reduced her bra size from Enormous to Large.
Next: Down the Rabbit Hole: My Adventures in Publishing »
Home | Archive

25 thoughts on “If You Want To Change Your Life, Begin With Your Underwear”