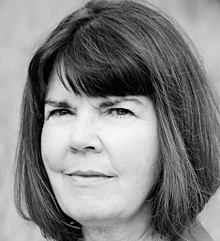 Mary was their firstborn, and her parents studied her gravely, alert to imperfections. It was the 1950s, and they were modern parents who favored modern medicine over advice from the older generation. “Parents of the future will be a whole new breed,” Gerald told his wife. “They’ll understand the importance of science.” Blanche agreed with him completely. The two of them would raise ideal children fit for an ideal world.

The fourth toe on Mary’s right foot was crooked, so they took her to an orthopedist.

“It looks like she has a crooked toe,” Dr. Merchant said, peering at Mary’s toe, which curled to the left like a miniature macaroni. “I suggest you tape it to the toe next to it and see if that straightens it out.”

“How often should we change the tape?” Blanche asked, pencil poised to take notes.

“Why don’t we try every morning and evening,” Dr. Merchant said.

“What is the statistical probability that this will work?” Gerald asked him, man to man, one professional to another. Gerald was an engineer, prone to calculating odds and graphing outcomes. Blanche stayed quiet, knowing Gerald preferred to take the lead in matters of importance.

“We’ll see, won’t we? I can’t promise anything. If it affects the way she walks, you might want to consider some kind of surgery down the road.”

Gerald and Blanche took Mary home. The tape had to be changed every hour, as Mary impatiently waved her feet and kicked it off. Soon they gave up, preoccupied with her colic and constant wailing.

“This is not what I expected,” Blanche told Gerald, tearful from lack of sleep.

“Dr. Spock says it will pass.” Gerald held up their copy of Baby and Child Care, already well worn. “I’ve made a chart to monitor your diet. Stay away from onions and broccoli. We’ll keep an eye on other foods.”

Finally it passed. Mary didn’t like cow’s milk, and drank apple juice from her bottle, which she shook until it foamed, but otherwise she seemed much like the other children on the block—Joan Stewart’s son Roger, Connie Lewison’s daughter Beth, Megan Cartwright’s son Hal, almost a year older than the others. Over coffee in her neighbor’s spotless kitchen, Blanche consulted Megan about the colic, the toe, the apple juice, but Megan dismissed her fears. “Mary’s normal, Blanche. She’s doing just fine. And look how well she and Hal play together.”

“You’ve got a very healthy little girl,” Mary’s pediatrician, Dr. Dearing, reassured Blanche. “Not a thing to worry about on that score.”

One year later, according to plan, Blanche got pregnant again. Their second was a boy, also according to plan. Ronald was wrinkled like a prune when he was born, but soon plumped up, and he was happy from day one. No colic, no sleep problems, no crying.

Blanche had endless conversations with the other housewives on the block about Ronald. They gathered in one kitchen or another, crossing manicured green lawns holding coffee cakes or casserole dishes aloft. It was a break from the tedium of housework, days alone with demanding children, evenings alone with critical husbands. “Never a minute of trouble,” Blanche told the other women complacently. “He’s already sleeping through the night, you know.”

Absorbed in extolling Ronald’s perfections, it was some time before she noticed Mary favoring her left hand. She consulted Baby and Child Care; handedness, according to Dr. Spock, was in all probability not an inborn trait, but a habit that could be broken if parents exercised tact and diplomacy. Don’t battle your child, Dr. Spock counseled, guide him instead.

They tried. Gerald, who was even more concerned than Blanche, kept taking objects out of Mary’s left hand and putting them in her right. Often she would fling them away, and he would grimly retrieve them – a cup, a toy, a spoon – and put them back in her right hand. She seemed to think it was a game, and would fling the object away again.

Mary began switching back and forth, writing with her right hand at home, and with her left hand at school. “I don’t know what to do,” Blanche told Miss Rice, Mary’s kindergarten teacher. “Gerald blames me. I’ve been following the book, but it doesn’t seem to do much good.”

“It’s probably a phase,” Miss Rice told her, scooping up a wailing child and bouncing her on her hip. “Just wait it out.”

Blanche and Gerald frequently reread Dr. Spock, who admitted that the issue of handedness was a confusing one. “If from the very beginning he has a definite preference for the left or if later he begins to insist on using his left I wouldn’t argue or fight with him but leave him to his preference. Even if his left-handedness is an expression of contrariness, it would only make matters worse to get him more antagonistic and obstinate. The cue then is to guide him tactfully, if he is willing to be guided, but not to fight him.”

They argued about how to interpret this.

“She can see you’re angry.”

“Do you have a better idea?”

Both worried that Mary’s resistance to their repeated efforts might be symptomatic of a larger problem. Would she turn out to be a contrary child? Antagonistic? Obstinate? Devious? Certainly she seemed determined to get her own way, even when preserving her left-handedness involved subterfuge and outright disobedience.

Blanche pointed out that Mary had a sunny disposition in most respects, and doted on her little brother. “Just look at the two of them,” she said to Gerald. “Aren’t they sweet?” Even before she could read, Mary memorized books and turned the pages as if she were reading them to Ronald. Their favorite was The Little Engine that Could. “I think I can, I think I can,” she read over and over, and he clapped his hands in glee. Ronald followed Mary everywhere, and copied what she did.

When Ronald started drawing, and then writing with his left hand, Gerald was enraged.

“Mary was determined to defy me, and you let it happen. We should have nipped this in the bud right away. Now look at our son!” He paced the master bedroom in growing fury.

“I don’t give a damn what Dr. Spock says. It’s a right-handed world and now both our kids have strikes against them. If that’s what you wanted, well that’s what you got.”

By the time Mary entered high school, their well-laid plans had collapsed. Gerald was tight-lipped, Blanche teary, as Mary challenged her father’s politics, her mother’s model of womanhood, their class privileges, U.S. domestic and foreign policies, corporate greed and its effect on the planet. Mary wanted to change the world. An entire generation of contrary, antagonistic, obstinate children had taken to the streets waving banners with leftist slogans, and Dr. Spock was out there too, protesting the Vietnam War.

Maybe Gerald had been right about everything, but Blanche wasn’t so sure any more. Was Mary’s rebellion all her fault? She didn’t know what she’d done wrong, or what she could have done differently. Mary had been contrary from the very beginning. It was like looking in a mirror and seeing everything in reverse. The ideal world of ideal offspring, the orderly suburban utopia they’d created and struggled to maintain, all of it, mirrored back in reverse.

“You just don’t get it,” Mary told her father, chin raised in defiance. Mary’s legs were unshaven, she was wearing sandals in December and no bra, and her rainbow of mismatched clothes had come out of a thrift store bin.

“Where’s your itinerary? What about reservations? You never think ahead. Ronald doesn’t either.”

Ronald had dropped out of three colleges and was painting houses. He rarely came home. Mary had completed college with a major in philosophy, despite Gerald’s objections. She was living with a poet who looked like Che Guevara, and they were about to embark on a backpacking trip through Europe. They hadn’t booked return tickets.

Blanche privately felt that Mary looked happy, and that Mary’s poet was charming, but she knew better than to say so. What freedom, to go on the road like that, with no definite plans, no one to answer to. Their detailed blueprints for the future hadn’t helped her and Gerald much.

“Are you going to marry that bum?” Gerald asked Mary, livid.

“Why should I? Marriage is a bourgeois institution, oppressive for women.”

What if Mary had a point? Connie Lewison had left her husband and was studying law. The Cartwrights had split up and Blanche had heard that Megan was going back to school too. She suppressed her disloyal thoughts.

“No one else will marry you after you’ve lived out of wedlock.”

Blanche flashed back on their worries about Mary’s errant toe, all their arguments about her left-handedness. For no reason she could possibly explain to Gerald, her anxieties about her daughter’s future lifted, replaced by an odd sense of satisfaction. She recalled Mary at five, reciting “I think I can, I think I can” with exuberant determination, and suddenly laughed out loud.

Mary looked at Blanche, surprised. “Are you okay, Mom?”

Gerald glared at them both, and stomped out of the room.

Jacqueline Doyle has work published and forthcoming in Confrontation, South Dakota Review, Front Porch Journal, Southern Indiana Review, Ninth Letter online and Southern Humanities Review. A recent Pushcart nominee, she also has a "Notable Essay" listed in Best American Essays 2013. She lives with her husband and son in the San Francisco Bay Area, where she teaches at California State University, East Bay. You can find her online at www.facebook.com/authorjacquelinedoyle
Next: Heartache »
Home | Archive

13 thoughts on “Mary Most Contrary”