The feminist movement, and the lesbian movement for respect and equality, will be dead only when every activist is dead. We must continue to come out of our houses and into the streets. We must be willing to invite that tightness in the chest, that moment of the stumbling step. And we must be thankful for, and expect, the roses that are held out to us!

In the early 1970s I was a charter member of The Other Side, a lesbian social club in Marin County. A founding member, Alta Fly, suggested we go over to San Francisco and infiltrate the Gay Pride Parade. She said it was about time lesbians had a presence there. “Alta Fly” was perhaps an invented name; many women were renaming themselves. Whatever the truth of that, the person inhabiting Alta was as inventive and as arresting as the name itself. Two or three of us said, “Count me in!” We were off!

I had worked as an illustrator in the Women’s Army Corps and could do legible printing so I was delegated to create our banner. I painted “See The Other Side” on one side of a piece of blue oilcloth and on the other “The Other Side, a Lesbian Social Organization – Marin County.” We piled into my VW Squareback (I think there were just four of us) and went over to Battery Street where the parade was forming. In 1972 you could actually find a parking place in San Francisco!

A couple of women standing on the curb asked if they could join us, said they wanted to march but they didn’t want to be alone. I think the desire to be a part of that parade, to change it from the drag queen extravaganza it had been, was beginning to occur to a lot of lesbians.

Harvey Milk was arranging the groups and when he saw us he got that characteristic bemused Harvey twinkle in his eyes. Amused and surprised – and challenged. MY GOD – what am I going to do with them?! He put us just behind Dignity. I think their sign read: Gay Catholics Have Dignity. There were about four or five of those guys. We were in good company.

So we started out. My lover at the time was one of our older students at the college where I worked and I thought, Oh, hell. If they do any TV of this I suppose I could be in trouble.

A few years after that march, a Republican Assemblyman from Southern California named John Briggs mounted a campaign to require the dismissal of any gay or lesbian teacher employed by any school in this state. Although the voters eventually rejected his initiative, his efforts were somewhat successful. Some brave lesbian and gay activists –particularly Harvey Milk, and the writer and educator Sally Miller Gearhart – gave talks around the state, debating the issue. Briggs was no match for Sally and Harvey. The name John Briggs is almost forgotten and when it is remembered it lives in infamy, but history will never forget Harvey and Sally.

I was not teaching, but I was working in a college library and still holding an unused credential in librarianship. That credential was red-flagged. I had been part of the Institute for the Study of Nonviolence, and had spent ten days in the Alameda County jail for having blocked the entrance to the Army Induction Center in Oakland in October of 1967. My credential was suspended and finally restored but then red-flagged by the California State Board of Education under the Reagan Administration. That arrest and time in jail for non-violent direct action was interpreted as “moral turpitude” under the California Education Code. A lesbian and a U.S. Army veteran, now marching in the Gay Pride Parade, had been found guilty of moral turpitude for non-violently telling inductees that when they became soldiers they would be killing people – not simply just stepping on hands and bodies to get into the induction center. I had to laugh! How incorrigible could I be?

My lover and I carried the banner most of the way along that parade and all along the route people cheered us. At first I could not believe it! But very soon our little group was emboldened. We raised our fists and shouted: Out Of Your Houses and into the Streets!

I think we picked up a couple more women along the way. I remember someone checking out the banner and saying: Oh, O.K. I can go with that!

Just before we got to the civic center and the end of the parade we saw a very dignified old Black man. He was wearing a natty brown suit, off-white shirt, a tan tie and a grey hat. He had a small bunch of red roses in his hand. He raised the roses and bobbed them up and down at us. Thank you! Thank you!

I couldn’t breathe. My chest was bursting. I didn’t know if I could make it to the finish line. I remembered how it was less than twenty years before when I came to San Francisco to live and go to school: ugly remarks were hurled at me as I walked down the street. And I wasn’t carrying a banner! I wasn’t doing anything unusual. I wore an odd assembly of civilian clothes and parts of a military uniform since I was going to school on the GI Bill of Rights and I had no money to buy clothes. I had a very short haircut. In 1955 I was only being in my own skin and some people hated me and perhaps were frightened by me and felt it necessary to let me know that. And this was San Francisco – the Mecca for lesbians and gays though we knew we had better not have more than one toe out of the closet, even in Mecca.

That evening I listened to the news on KPFA. A reporter was asked if there had been any lesbians marching. He said: Oh, yes. There was a pathetic little band of women – from Marin, I think.

Now Dykes on Bikes lead the parade. And though I’ve done that parade – that march – a couple of times since, I have never enjoyed it so much as I did that first, historic time – and, happily, have never been as scared! 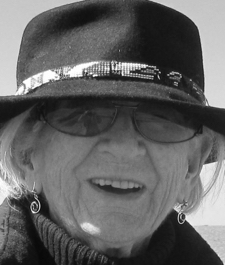 Author’s Comment: This is a revised and I hope revitalized piece, derived from an earlier version I wrote just as a description of an historic time in lesbian liberation as I saw it. In doing that march I had bitten into a larger piece of the work of achieving respect and equality than I had yet taken on, though for a number of years I had been out of the closet and on panels speaking to select groups. I rewrote the piece thinking of America’s recent acceptance or at least toleration of lesbian and gay marriage, and hopeful of eventually a recognition of us as real people who might be loved as the beings we are and not simply tolerated and awarded rights because it is correct to do so. I am aware also that a great many people are not aware of the oppression and the dangers that were faced by lesbians and gays even in the more enlightened San Francisco area even as recently as the 1970s. That history is important to know because although we are so grateful to be pretty much past those hard times at least in some parts of this country, we must guard against the possible revival of that oppression even if only in bits and pieces.

Pat Pomerleau lives in Santa Rosa with a little old dog named Smittie who insists he too is a feminist.