I wasn’t looking for a new best friend, I said. Still, I agreed to shut up and listen when my daughter insisted she’d found one for me. “I do what Match.com doesn’t,” she liked to brag. Her people skills were earning her a living, matchmaking for romance and business.

Less adept at finding someone for herself, Ms. Matchmaker had been dating a despondent young painter who walked dogs to pay his rent in the funk-pocked Seattle neighborhood where they both lived. He wanted Tess forever. She liked him, but not that much.

One afternoon Tess telephoned my husband and me at our home in Maine with her news. The dog walker’s mother and stepfather had flown into Seattle for a visit and she, Tess, had fallen in love. Not with the son, oh no. Cooing, she colored in the parents for me. Witty and gregarious, they held tenured posts – he in film, she in literature – at a prestigious Philadelphia university. Both gourmets, avid for art, mad for theater, partial to offbeat travel; the list went on.

“Mom, they are so cool, I just know the four of you would click. Morgan is dying to meet you when you come out next month. She’s looking for a soul-mate kind of friend. Someone like you, I told her.”

Stuck with a cross-country blind date. Yes, Morgan and her husband would again be in Seattle during the very week we’d be there. Dinner for six was arranged.

By the time Tess and I spoke next, the young couple’s relationship was floundering. “But that doesn’t matter, Mom, you’ll see. Even if we break up I know you and Morgan will be best friends forever.”

And indeed, the evening Morgan and I met in my daughter’s tiny Fremont kitchen, the two of us halfway into our third glass of Pinot Gris, we mothers tumbled fast to shared tastes and mutually adventurous lives. Even our nasty divorces from past husbands had traveled deliciously similar trajectories. “Sisters under the skin,” my alter ego crowed, tossing back her long black hair and hugging me. She and her clever husband “adored” my charming daughter, whom they hoped would bring their son out of his doldrums.

Morgan emailed me the week after our visit, proposing an extended weekend for all of us at their Cape Cod beach cottage “ASAP.” Over a series of long emails, she parted with her killer ragu recipe, and I with my to-die-for pound-cake trick. We commiserated over roads we ourselves hadn’t taken and the ones we wished our children had. We sent each other tips for places to stay in Crete and Slovakia where no Americans went.

The infamous 2000 election campaign was in progress. Two weeks after I’d forwarded an op-ed piece from The New York Times by Paul Wellstone, the fiery Democratic senator from Minnesota, I realized I hadn’t yet heard back from Morgan. More weeks went by. I wrote again and again received no reply. Must be busy with exams, Tess reassured me. Meanwhile, hanging-chad jokes flooded our in-box, followed by bitter jibes at the Supreme Court’s decision. I forwarded a few trenchant samples to selected friends, including Morgan.

One week later the woman who shared my love of Vladimir Nabokov and George Eliot, who’d bounced through Mexico in third-class buses with live chickens tethered to the overhead rack just as I had, who, like me, patronized dark, tiny Ethiopian restaurants in transitional neighborhoods – the woman my daughter had promised would be my best friend – responded.

“Why you had the gall to assume I would welcome a collection of scurrilous jibes from a bunch of disgruntled left-wing lunatics is beyond my comprehension. Evidently you assumed my political views mirror yours. Make no mistake, they do not. Do not contact me again.”

No salutation. Not even her name at the end of the message. In her last email Morgan had typed an all-caps thanks to me for introducing her to the novels of Graham Swift. Now, every shred of compatibility had vanished; a nasty right-wing conservative had emerged and cast me aside. What happened to sisters under the skin? In my smug liberal circles, when new friends connected on writers, films, life, and food, you never had to ask about party affiliation. But Morgan had voted for a candidate who would have flunked her own British Lit course and spurned a lunch of moules marinières for a Texas chiliburger.

The shock lasted weeks, then receded as I recalled how unthinkingly I’d invested the two of us with heady twinship. I’d assumed she was just like me. Instead, dog walker’s mother sported a bundle of crazy dualities. Astonished and rueful, I saw now that sharing a bus with chickens in a poor country didn’t make someone politically liberal and that I’d been naive to assume it did.

Beyond that thought I wasn’t ready to re-examine lifelong premises. I slipped back into my NPR/ Birkenstock /latte bubble and deleted the useless email address from my contact list. I’d never have to deal with an anomaly like Morgan again.

“Don’t find me any more best friends,” I groused to a mortified Tess. My husband actually counted as a pretty good friend himself, after all, even if he’d never finished Mrs. Dalloway. So did my poor daughter; she’d had the best of intentions.

Four years after I’d been consigned to someone’s friendship hell, we moved across the country to the other Portland, where my older daughter lived. One April soon after our arrival, we spent a weekend at a reader’s retreat on the Oregon coast, a comfy old hotel where every room reflected the style of the writer whose name it bore. I chose the Virginia Woolf room for us, and quickly immersed myself in the Bloomsbury doyenne’s journals and essays crammed in the bookcase shelves. Only the rustle of turning pages broke the comforting silence in the cushioned library after dinner.

Two days later as we packed to leave I glanced at the guest book on the windowsill. Not three weeks earlier another woman had scribbled her thoughts.

I savored this guest’s praise: for the period décor, for Virginia’s criticism, for the playful “truth or lie” dinner games, and for the Pacific Northwest cuisine. Then the tone changed abruptly to scorn for the “politically correct” conversations dominating the dining room at breakfast: “Nothing but liberals who support terrorists and can’t stop carping against the president and Condi.”

My eyes widened. I’d never met this woman, who gave a St. Louis address, but her words recalled the sudden fallout with my daughter’s now ex-boyfriend’s mother. I thought again how I had equated the personal with the political, lifestyle with values. Here on this page I saw a woman of taste and erudition – and one whose politics clearly didn’t match mine.

Could this right-wing book lover ever have slept in a Bulgarian hostel? Bargained for harem pants from a Jerusalem peddler? Now I knew I’d boxed myself into litmus-test priggery. It was time to crawl out – and I did, quite unexpectedly.

At an international film festival a few months later I met a woman I bonded with instantly, just as I had with my long ago “best friend.” Terri had even served in the Peace Corps late in life, like me. More kinetic than literary, my new acquaintance introduced me to quirky happenings in disparate neighborhoods, to culinary fusion in pop-up carts; to the cheerful verve of a city that had been slow to feel like home to a lifelong East-coaster. She listened well, her people smarts always wicked sharp. I showed her how to make pie crust. She brought me homemade tapioca pudding after my dental implant. Though I’d been careful not to take her political temperature she must have sensed mine.

When, with a sly smile Terri admitted she was “no liberal,” a card-carrying Republican in fact, my jaw briefly dropped. Then we both laughed. We’ve remained friends ever since that admission, even through screaming newscasts of the most flagrant Congressional dysfunction and the antics of the Republican presidential hopefuls. I don’t know what she thinks; I don’t know why she thinks it, but when we’re together we let politics sail past us. My daughter hadn’t been such a clueless matchmaker after all. She’d found me a “best friend” who rejected me, whose “crazy dualities” had flummoxed me. In time I found a real friend whose same crazy dualities I have embraced, as she has mine. 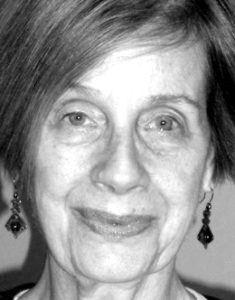 Author’s Comment: When you are a lifelong, left-wing Democrat, finding out that a new friend supports the candidacy of a man like George W. Bush is almost like discovering your favorite uncle is a child molester. That’s the way it seemed at the time. The story I first wrote dripped self-righteous outrage. Time, growth, and further life experience eventually modified my perspective – and the piece. One small example: Working on a Croatian forest commune two summers ago, I met a scholarly, math-oriented woodcarver, who, amazingly, didn’t believe in global warming. But was it so amazing? All of us, I’ve had to realize, hold unlikely juxtapositions within ourselves (including me, I’m sure) and that’s what made this story satisfying to write and to rewrite.
Lee Haas Norris has published nonfiction in Passager, The Gettysburg Review, Persimmon Tree, The Literary Bohemian, The Boston Globe, and other publications. She is a graduate of Barnard College. She served in the United States Peace Corps in Moldova in her sixties, later earned an M.A. in English from the University of Maine, then taught in the Czech Republic. She and her husband have traveled throughout Europe with WWOOF, Couchsurfing and home exchanges. She is an avid reader, English Country dancer, amateur musician, and choral singer. She moved from Portland, Maine to Portland, Oregon in 2003, and has performed for nine years in The Portland Christmas Revels.