Beginnings and endings were much on my mind as I put this issue of Persimmon Tree together. As always, our contributors have sent us thoughtful pieces, many on the themes of birth and death. But it has also been a time of loss for us. And a time to remind ourselves how and why we began.

To begin: The magazine was born in 2007. We are often asked why our name is Persimmon Tree. Here is founder (and soon to be Publisher/Editor Emeritus) Nan Gefen’s answer:

When I began to organize and create Persimmon Tree in 2006, I spent months searching for a good name. I knew it had to be dignified and accessible so that it would set the right tone for the magazine. Cute or soppy names wouldn’t do because the reason for the magazine was to honor the creativity and talent of women over sixty, a serious matter in my mind.
One late autumn day I was looking out my window at my neighbor’s garden and noticed a tree with large globes of beautiful orange fruit hanging on its bare branches. It was a persimmon tree. The fruit trees around it, wild plum, apple, and apricot, had long ago dropped their fruit, and there was just this one left in its full glory.
I was struck by the sight and began to think that the persimmon tree was the perfect image for the magazine. Some of the writers, poets, and artists we published would be well known, but many would just be beginning to get their work into the world. And the persimmon tree embodied this, standing alone with its beautiful, late-appearing fruit, producing its harvest on its own timetable.

I end with the loss of two dear friends, Linda Boldt and Christine Stewart. Here is how Linda described herself when she joined our Editorial Board: “Linda Boldt retired after 30 years teaching middle and high school students what makes good, clear writing. Her past involvements have included assisting in SEED seminars (Seeking Educational Equity and Diversity) at her school, serving as President of NYC PFLAG, and raising her son in New York City.”

I would describe her as brave and adventurous, clever, warm, generous, and stylish. She was my friend and irreplaceable colleague for 42 years. I still worry what she will think when I use the word “very” too often in my writing. Linda died of cancer on August 13, 2018. 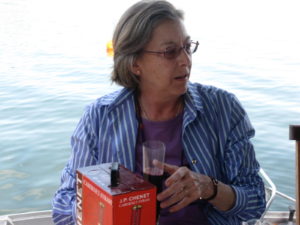 Christine Stewart wrote about her illness for the Editor’s Notes in Issue 40, Winter, 2017. Her friend Jean Zorn writes: Christine would not have retired – ever – but for the devastating illness that overtook her lungs, robbing her of strength and breath and, ultimately, of life. Before her illness, she had been a politician, a student of languages, a lawyer, a legislative drafter, a novelist and poet, and an actor. She owned and ran totally on her own a cattle station in outback New South Wales. In her mid-sixties, she got a Ph.D in gender studies, writing about the criminalization of sex work and gay sex in Papua New Guinea. She turned that thesis into a book that is the primary source on the topic throughout the South Pacific. Although confined by her illness to a bed and a chair, she wrote her autobiography and campaigned vigorously for the right of patients in situations like hers to choose to die.

That is what she did. This is what she was: fiercely brilliant and creative, intensely and unreservedly passionate about her work, her friends, and the eradication of injustices great and small. She was a woman of conviction, whether about the proper way to pack a suitcase or the right phrasing for a fisheries bill. Her emotions were huge. She loved and hated with equal passion. She was a force. She was wonderful. Christine died on July 22, 2018. 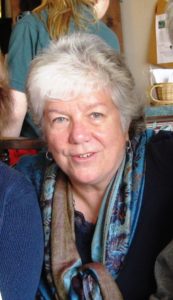 May all your beginnings and endings be what you want and need them to be.
Sue Leonard
For 45 years, Sue Leonard taught every variety of history except American mostly at independent high schools for girls — with a brief stint in a poverty program school for pregnant teens in Bedford Stuyvesant. In the mid-nineties she and her late husband John Leonard were co-editors of the Books and Arts section of the Nation Magazine. Since retiring, Sue has filled up her days with reading, needlework, family, friends and long walks.