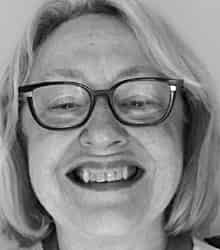 It was my first trip to Paris. I’d come over on the Chunnel, going through at least five passport checks and two baggage scanners before being seated on the train. Two days before, there’d been a subway bombing in London, and just a few months before that the attack at the Ariana Grande concert in Manchester, an attack that killed 22 and injured dozens more, many of them young girls.

The morning of the bombing, we had breakfast at a restaurant where construction workers go on break – some of the chairs had drops of fresh paint from their work clothes – when one of them started talking about an explosion in the Tube, a mile or so from where we were sitting. Fuckers, one of the men said. Fuckers, they all agreed.

Later, we saw the strafe marks from German bombs on the side of St. Paul’s Cathedral. Fuckers, I said when I saw the marks. Fuckers, my husband replied.

So I understood and even welcomed the checking and re-checking at the train station, though the accumulation of scans, and two weeks of men looking through my purse with flashlights at museum after museum, had been wearing.

But Paris! I’d been looking forward to Paris my entire life. All the books I’d read and movies watched, all the songs I’d heard: it was the site of my teenage daydreams and my alternative life, where I wrote books in longhand at cafés, in some parallel universe completely different from the pedestrian American Midwest.

But while I have a few photos of the usual tourist sites to remember Paris by, the two most representative photos from the trip are one of me sitting at a sidewalk café, wrapped in a shawl, shivering, and a short video of billowing curtains I made from my hotel room sickbed.

I had the flu. The day before I would let myself believe I was sick, when I walked the Parisian streets shivering, the history of Europe had begun to seem nothing but a history of war and violence. How had I not known this? Here is the spot where the guillotine cut off the head of Marie Antoinette; here a reminder of Napoleon’s armies, of the Revolution, the Terror, Nazi occupation, the plague.

In contrast, the actual beauty of the city of lights and bridges and labyrinthine streets seemed almost pornographic, underpinned by a pattern of violent upheavals. In Paris, the constant reminder of the casual brutality groups of individuals inflict on one another over centuries when there are so many people in such close proximity made Americans seem oddly naïve to me, prone to utopian fantasies.

In Paris there were too many gendarmes, young boys usually, with semi-automatic rifles held in their arms like babies. It was hard to walk on the edge of the sidewalk where the rifle was pointed toward me and not flinch. One night in Paris there was an economic conference of some sort at our hotel, and there were dozens of these rifled boys on the steps as we walked in.

When I felt sick but made myself keep moving because I was in Paris, the history of violence was all I heard from the commentator on the Hop On/Hop Off bus, all I read about in the tourist guidebooks. This head chopped off here and this one there and always, underneath the stories, the other stories: of sexual violence and betrayal. I thought a lot about Rimbaud and Verlaine, about Les Mis and La Boheme, about Madame Bovary and Giovanni’s Room. Jean Rhys’ After Leaving Mr. McKenzie, with its betrayed and sickly heroine was more than I could bear. A pox on A Farewell to Arms. A pox on The Talented Mr. Ripley.

Now I attribute this state of mind to the flu. Not delirium, really, but I was feverish and had been walking through the illness – the chills and hacking cough – enough that the romance of the tubercular poet or revolutionary carrying on doomed love affairs while dying had begun to seem ridiculous. Even the Eiffel Tower struck me as a sort of silly IKEA minimalism. It was prettiest when shrunk and hung as a Christmas tree ornament, I thought, though the young men walking around with large rings of clanking miniature Eiffel Towers to sell seemed like something from a horror film. That was the moment when I knew I’d had enough and needed to spend the next two days in bed.

That’s why a video of the sheer curtains billowing against the chipped-paint sills and yellow walls in my hotel room window is the most beautiful thing on my camera roll from that week in Paris. I recorded the video the day I decided to just give in to the flu and skip the Louvre. That curtain seemed transcendently beautiful, seemed to contain all the meaning in the world.

There’s a Pinterest site, it turns out, with over 500 images of billowing curtains, from the famous (Wyeth, Hopper) to the ephemeral photograph selling bedding or furniture. In every image, the curtains are always as delicate as gauze, usually a stark blue white, sometimes viewed from the side and including a woman resting on a bed or standing so the curtains billow around her like a flock of birds or moths. The wind comes and goes, caught briefly in motion in image after image. In the unobstructed views, where the curtains are seen head-on with no furniture or human being in the way, the panels blow directly into the room, wing-like, as they do in Andrew Wyeth’s “Wind from the Sea.”

If I ever have the opportunity to build a museum, I decide, it will be a museum of billowing curtains. There will be images and paintings of the curtains and there will be real curtains hanging against real open windows. In the images, it will always be sunny outside the window, the curtains always in flight.

The room was heaven. Of course I had the luxury of a quiet room and hot tea and no responsibilities and an illness that was probably (as much as it felt to the contrary) not fatal. The flu gives you permission to stay still, permission to wrap up in blankets and shawls. It made me particularly sensitive to sound and light. My childhood illnesses were spent with the soundtrack of daytime TV, which makes me nauseous still. But I have some pleasant memories of being an adult just sick enough to study light from the window and permission to simply take in the changing colors of the wall.

I decided my museum might include, on occasion, special exhibitions: images of the wind through prairie grass or lavender fields, through perennial gardens filled with Black-Eyed-Susans. It could bring in the scent of mint or coffee or the ocean or rain. It might contain a room filled with wind chimes and perhaps a room of cut-glass prisms waiting for the sun to paint the room with color. It would sell hand-woven linen in the gift shop, and bolts of satin and soft wool and elaborate embroideries, and photographs of pears and apples and secret gardens.

Actually, I take that back. Nothing in the museum would be for sale. You could take something and leave something: a river stone, a piece of seaglass. The museum would appear when you needed it. There would be beds with white sheets for you to lie on. It would be there for you when you were sick of the world. It would be a place of respite, a drink of spring water. It would be run by women and saints.

Most importantly, there would be a room in the museum called Books of Wind and Light. It would include Welty’s Optimist’s Daughter and June Recital, May Sarton’s Journal of a Solitude, Chekhov’s The Steppe; Colette’s My Mother’s House, James Salter’s Light Years, Kate Chopin’s The Awakening. I’d bring some Trollope in, some E.M. Forster, some Kawabata. And lyric poets. And books of the prairie: Ray Bradbury’s Dandelion Wine, Jessamyn West’s Friendly Persuasion, Toni Morrison’s Sula, Kent Haruf’s Plainsong, and every word by Willa Cather. People would bring their own favorites to the room.

There would be no entry fee, no checkpoints, and no one turned away. I would place it next to the Museum of War.

The recipient of the Flannery O’Connor Award for Short Fiction and the Richard Sullivan Prize, Susan Neville’s recent collection of fiction, The Town of Whispering Dolls, won FC2’s  Catherine Doctorow Prize and was published in March, 2020 by FC2, an imprint of the University of Alabama Press. She is the author of seven books of creative nonfiction, and her essay “Into the Fire” appeared as a Ploughshares Solo in 2019. She lives in Indianapolis, Indiana, where she has taught at Butler University for 37 years.
Home | Archive | Issue: Fall 2020
Next: What Will I Be Today? »