Women in Bronze (and Copper) 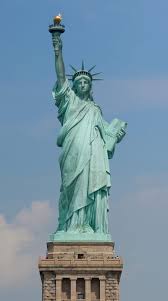 Central Park in New York City covers 843 acres – it is larger than Monaco – and, with 29 statues, could even be considered a sculpture park. Yet, until August 26, 2020, not one honored a woman. Alice in Wonderland, Juliet (kissing Romeo), and Mother Goose just don’t count. At last: On the 100th anniversary of the ratification of the Nineteenth Amendment, the Amendment by which women won the right to vote, the Women’s Rights Pioneers Monument depicting Sojourner Truth, Elizabeth Cady Stanton, and Susan B. Anthony was unveiled on Literary Walk. [Initially, the design depicted only Anthony and Stanton; Truth was added in response to criticism that the suffrage movement was being “whitewashed.”] The sculpture portrays the three women gathered around a table, perhaps for a strategy meeting. Anthony stands in the middle holding a pamphlet that reads “Votes for Women,” Stanton is holding a pen, and Truth is speaking. “My intention,” said Meredith Bergmann, the sculptor, “is that viewers will decide for themselves what Sojourner Truth is saying and what Elizabeth Cady Stanton is thinking and what Susan B. Anthony wants them to consider.”

It was not an easy battle (surprise!): According to Manhattan Borough President Gale Brewer, “The answer no came in many forms: ‘The park is closed to new statues.’ ‘Women don’t want a statue. They want a garden.’ ‘If we say yes to this statue, we’ll have to say yes to any statue.’ And my personal favorite: ‘You have to prove that each of these women had actually set foot in Central Park.’” Many, many people young and old lobbied for a statue; organizers said they received donations from over 1,000 contributors including from Girl Scouts who had petitioned and who donated proceeds from their cookie sales. 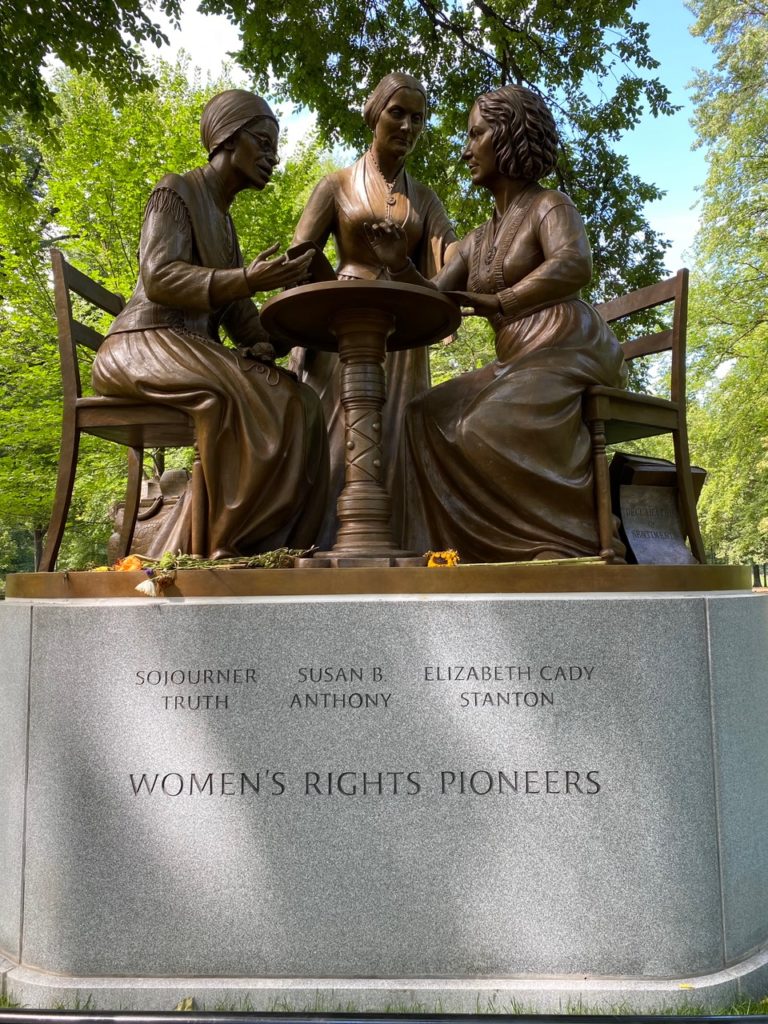 Sojourner Truth [Isabella Baumfree] (1797 – 1883), born into slavery in New York state, escaped in 1827. She joined the suffragist movement as well as the abolitionist movement. In 1851, she attended the Women’s Rights Convention held in Akron, Ohio where she delivered her famous speech that combined the two causes, “Ain’t I a Woman?”
Susan B. Anthony (1820 – 1906) was an activist for women’s rights who was born into a Quaker family. She met Stanton in 1851; they became close friends and collaborators on causes that included anti-slavery, temperance, and women’s rights. In 1872, she was arrested and convicted for voting in Rochester, New York. In 1878, a member of Congress introduced an amendment to legislation on her behalf. The Susan B. Anthony amendment was ratified as the Nineteenth Amendment to the U.S. Constitution in 1920.
Elizabeth Cady Stanton (1815 – 1902), American suffragist, abolitionist, and social activist, presented the Declaration of Sentiments at the Seneca Falls Convention in Seneca Falls, New York in 1848. The document is erroneously credited with beginning the first organized women’s rights movement in the United States.
* * *
The Women’s Rights Pioneers Monument is an essential addition to Central Park. New York City has a few other statues of important women and more have been promised. But in the whole country, perhaps fewer than 200 public statues depict women – less than four percent of the 5,575 public statues counted by the Smithsonian Institution. Some reasons why this matters:
Here are a few of our favorites:

Phillis Wheatley (c. 1753 – 1784) was the first African American to publish a book of poems. She was sold into slavery as a child, sent to North America, and purchased by the Wheatley family of Boston. They taught her to write and encouraged her poetry. Although she became of one of most popular poets of the eighteenth century, once the family that had enslaved her died, Wheatley had little financial support and died penniless.
TO THE RIGHT HONOURABLE WILLIAM, EARL OF DARTMOUTH:
I, young in life, by seeming cruel fate
Was snatch’d from Afric’s fancy’d happy seat:
What pangs excruciating must molest,
What sorrows labour in my parent’s breast?
Steel’d was that soul and by no misery mov’d
That from a father seiz’d his babe belov’d:
Such, such my case. And can I then but pray
Others may never feel tyrannic sway?
Abigail Adams (1744 – 1818) was the wife of President John Adams and the mother of President John Quincy Adams. Active in the founding of the United States, she is famous for telling her husband, “If particular care and attention is not paid to the ladies, we are determined to foment a rebellion, and will not hold ourselves bound by any laws in which we have no voice or representation.”
Lucy Stone (1818 – 1893), an abolitionist and suffragist, insisted “A wife should no more take her husband’s name than he should hers. My name is my identity and must not be lost.” Unlike many other suffragists, Stone believed Black people should be freed and be included in the vote.
Sculptor: Meredith Bergmann
These statues are in Boston, Massachusetts. 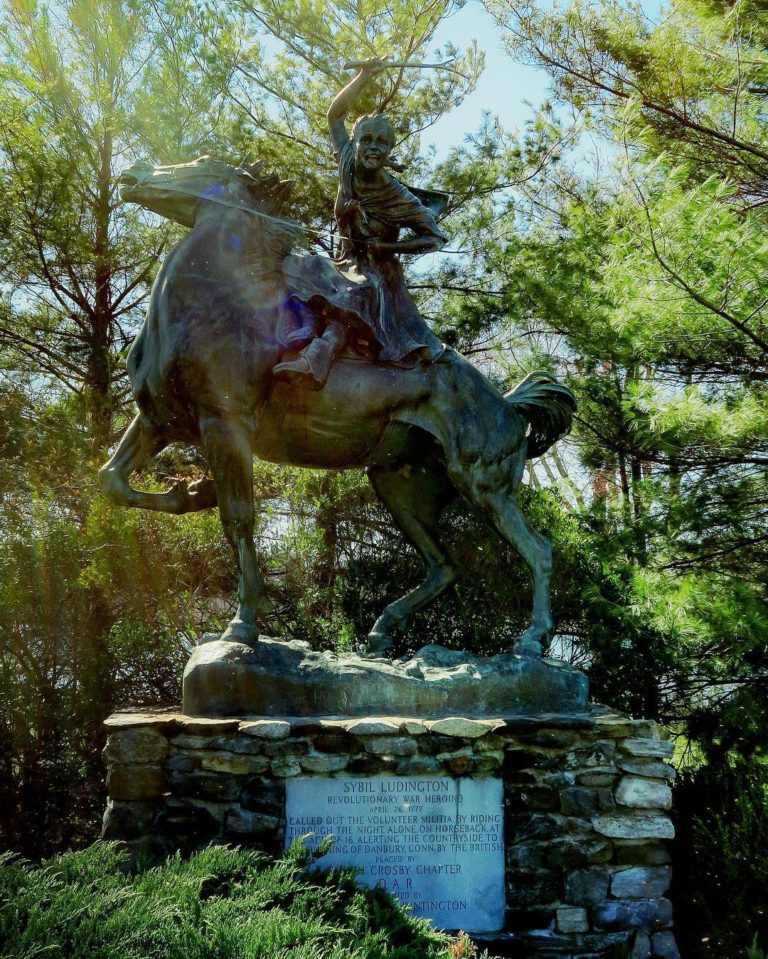 Sybil Ludington (1761 – 1839) was a heroine of the Revolutionary War. On April 26, 1777, she rode all night – on horseback – to alert militia forces in the towns of Putnam County, New York, and Danbury, Connecticut, that the British were coming. She was 16.
Sculptor: Anna Vaughn Hyatt Huntington
This statue is in Carmel Hamlet, New York. 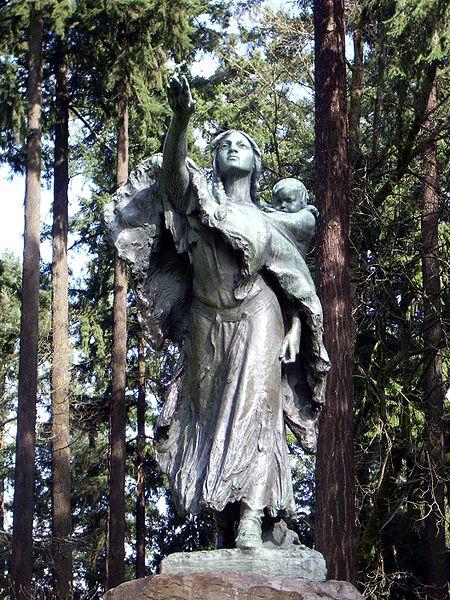 Sacagawea (1788 – 1812) was a member of the Lemhi Shoshone tribe who helped the Lewis and Clark Expedition explore the Louisiana Territory. She traveled with the expedition thousands of miles from North Dakota to the Pacific Ocean. Jean-Baptiste was her son. She was 16. More statues of Sacagawea exist than of any other woman; at least 16 have been counted.
Sculptor: Alice Cooper
This statue is in Portland, Oregon. 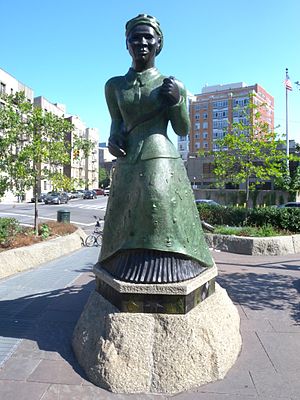 Harriet Tubman (c. 1820 – 1913) escaped from slavery and, using the network of antislavery activists and safe houses known as the Underground Railroad, made some 19 missions to rescue approximately 300 enslaved people, among them family and friends. When she first escaped herself, she recalled, “When I found I had crossed that line, I looked at my hands to see if I was the same person. There was such a glory over everything; the sun came like gold through the trees, and over the fields, and I felt like I was in Heaven.”
Sculptor: Alison Saar
This statue is in Harlem, New York. 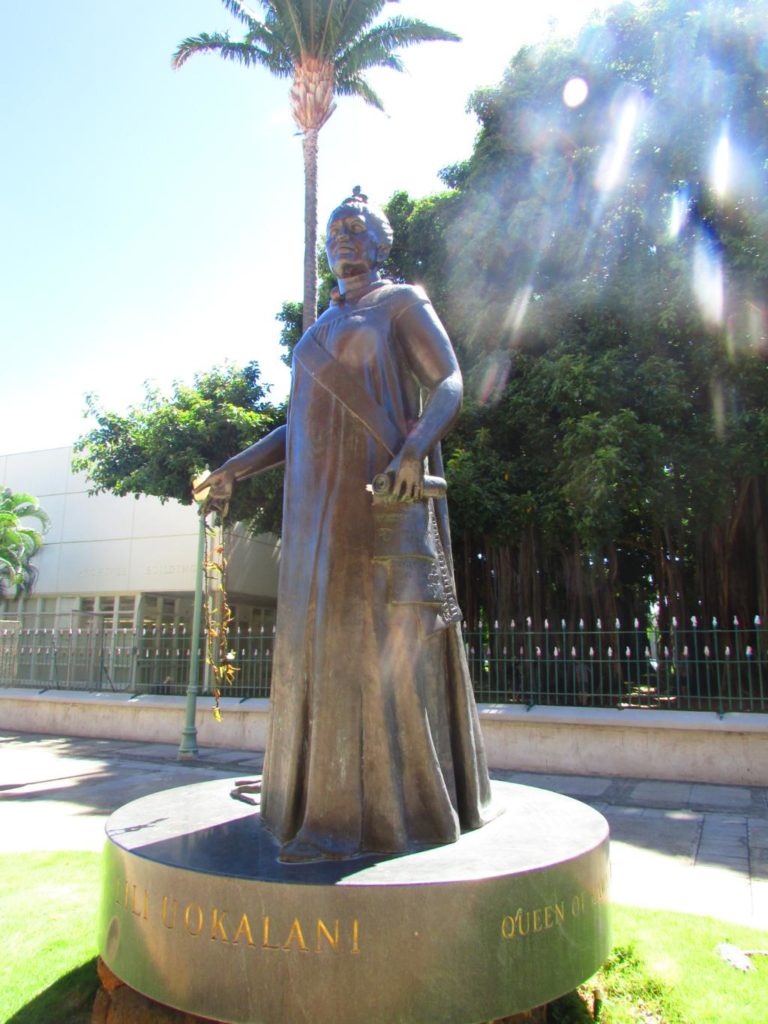 Lydia Liliʻu Loloku Walania Wewehi Kamakaʻeha (1838 – 1917) was the only queen regnant and the last monarch of the Hawaiian Kingdom, ruling from January 29, 1891, until her overthrow on January 17, 1893 by American troops and local business interests. Their goal was annexation to the United States; annexation occurred in 1898. In 1993 the U.S. Congress apologized to the Hawaiian people for taking over the Islands without their permission.
Sculptor: Marianna Pineda
This statue is in Honolulu, Hawaii. 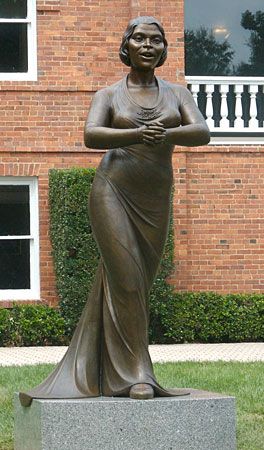 Marian Anderson, a world famous African American contralto, was denied the use of the auditorium at Constitution Hall, which was owned by the Daughters of the American Revolution, because she was Black. On April 9, 1939, At the urging of Eleanor Roosevelt and assisted by the FDR administration, she performed instead at the Lincoln Memorial. Anderson stepped onto a stage built over the steps of the Lincoln Memorial and began to sing “America.”
Sculptor: Meredith Bergmann
This statue is at Converse College, Spartanburg, South Carolina. 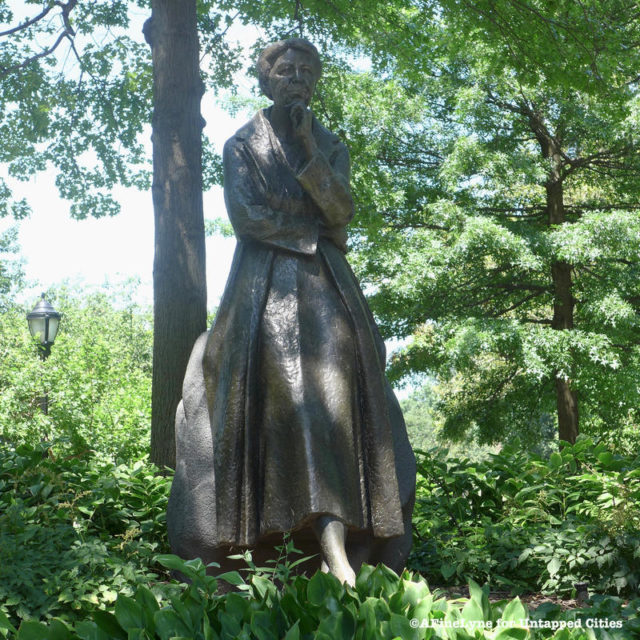 Anna Eleanor Roosevelt (1884 – 1962), First Lady from March 4, 1933 to April 12, 1945, was a teacher, journalist, diplomat, and activist in her own right. She chaired the United Nations committee that drafted the Universal Declaration of Human Rights. Near the statue a stone is engraved with this quotation: “Where, after all, do universal human rights begin? In small places, close to home. Such are the places where every man, woman and child seeks equal justice, equal opportunity, equal dignity.” – Eleanor Roosevelt, 1958
Sculptor: Penelope Jencks
This statue is in Riverside Park, New York, New York. 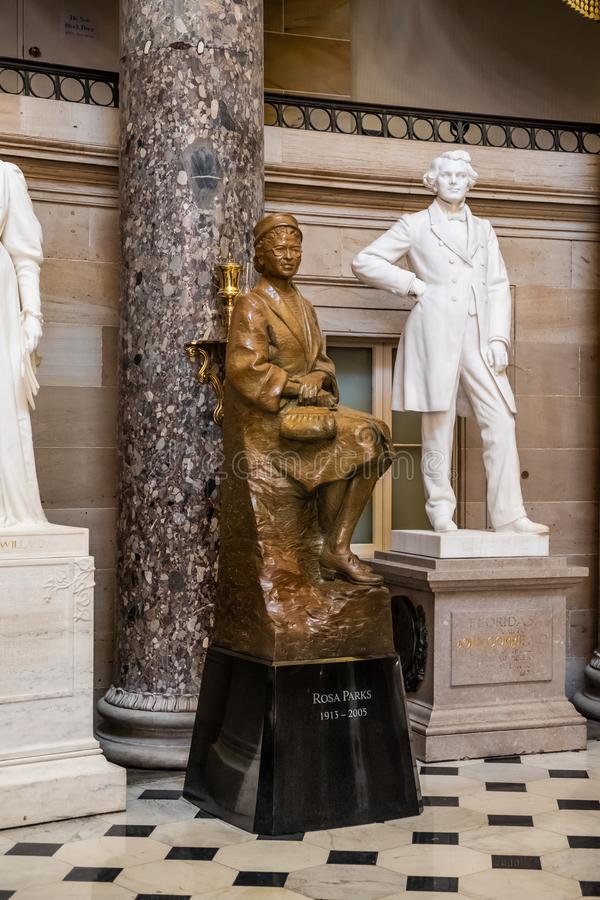 Rosa Louise McCauley Parks (1913- 2005) was an American activist in the civil rights movement best known for her pivotal role in the Montgomery bus boycott. An active leader in the NAACP, she trained at the Highlander Institute in Tennessee before challenging segregation laws by refusing to give a white man her seat on the bus. Was she tired? “No,” she said, “the only tired I was, was tired of giving in.”
Sculpted by Daub and Firmin Studios
This statue is in the Capitol Rotunda, Washington, D.C. 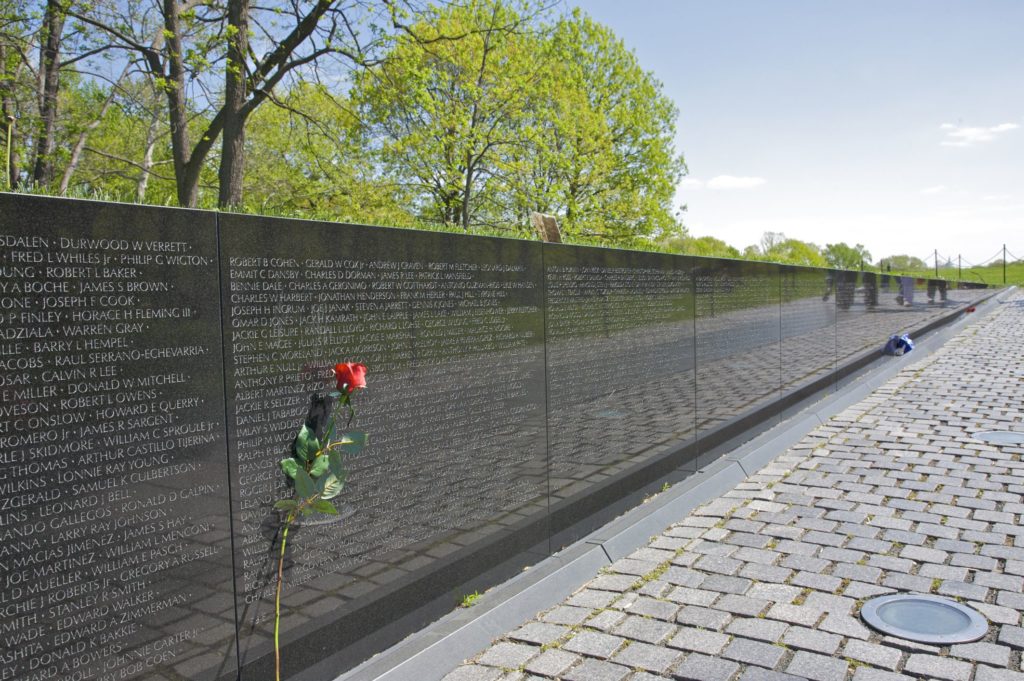 The Vietnam Memorial. The vast majority of public statues memorialize war heroes, typically men, often on horseback. For a change, Maya Lin created a v-shaped black granite wall with the names of the more than 55,000 soldiers who died in the Vietnam War carved into its face (hundreds have been added since the dedication). Every day visitors come to touch the names, to bring flowers, to visit their lost loved ones, and to make rubbings to take away with them. “I imagined taking a knife and cutting into the earth, opening it up, and with the passage of time, that initial violence and pain would heal,” Lin recalled.
Sculptor: Maya Ying Lin
This monument is in Washington, D.C.

Meredith Bergmann (b. 1955) studied at Wesleyan University and graduated from The Cooper Union with a BFA. Her rich output includes more than a dozen statues of historical figures, among them the four included here. She works for “social justice and historical redress through [her] public art.”

Alice Cooper (1875 – 1937) created this figure of Sacajawea and her son for the 1905 Lewis and Clark Centennial Exposition in Portland, Oregon. She studied at the Art Institute of Chicago.

Anna Vaughn Hyatt Huntington (1876 – 1973) was one of New York’s most successful sculptors, at a time when few women had successful careers as artists. She attended the Art Students League of New York.

Penelope Jencks (b. 1936) was chosen out of over 400 applicants to sculpt this representation of Eleanor Roosevelt. She has said she made the pose a contemplative one to suggest “the complicated inner life” of her subject.

Maya Ying Lin (b. 1959) is an American designer, architectural designer, and artist who works in sculpture and land art. She was a 21-year-old undergraduate at Yale University when she won a competition to design the Vietnam Veterans Memorial, to be built on the National Mall in Washington D.C. Her design, one of 1,422 submissions, stirred great controversy in part because she was young, female, inexperienced, and Asian American.

Marianna Pineda (1925–1996) made her first sculpture at eight years old. She attributed her early interest in sculpture to the many she saw at multiple World's Fair visits, as well as on travels with her mother to Greece and Egypt, both places where sculpture dominates.

Alison Saar (b. 1956) was born in Los Angeles, California, to well-known African American artist Betye Saar and Richard Saar, an art conservator. Saar received a BA from Scripps College (Claremont, CA) in 1978, having studied African and Caribbean art. Her thesis focused on African-American folk art. She received an MFA from Otis Art Institute (Los Angeles, CA) in 1981. She was the featured artist in the Spring 2017 issue of Persimmon Tree.

7 Comments on “Women in Bronze (and Copper)”