Art of a Contemporary “Old Master”
by Susan Schwalb 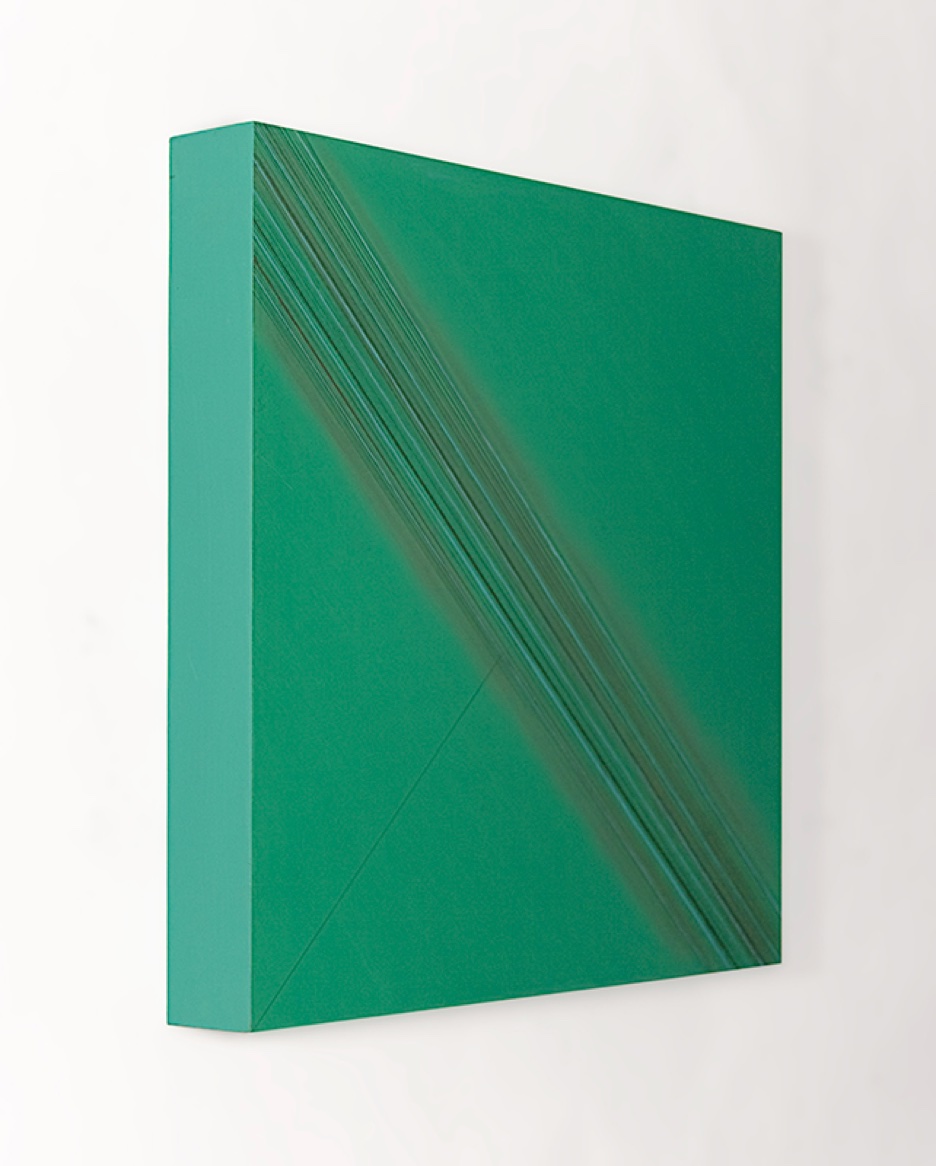 Then and now, Susan Schwalb and her art undermine and refute the title of the 1981 book.

Schwalb’s silverpoint drawings and paintings have been featured in major exhibitions of old masters; not too many living artists – male or female – can claim inclusion in shows highlighting Leonardo da Vinci, Albrecht Durer, and Lucas Cranach. Indeed, the British Museum has acquired several of Schwalb’s works for its permanent collection.

Schwalb began working in silverpoint in 1974; in 1984, she began to add color and paint. She has described her unusual techniques in numerous interviews and statements. But I think the drawing technique can be summarized as rubbing a combination of metals on prepared surfaces. The paintings are larger than the drawings, and consist of metal point applied over layers of paint. The artist sometimes removes parts of the surface with sandpaper in order to expose the paint underneath. The palimpsest continues at times, with the addition of more paint and drawing.

Although Schwalb’s silverpoint technique appears at first somewhat limited, and bears a faint affinity to minimalism, this perception could not be further from the truth. As the artist points out, the variety she can use is infinite. Indeed, the effects of her work are transcendent.

One example, “Harmonizations #20, 2019”, can be counterposed with a painting from the following year, “Harmonizations XIV.” The drawing, made with silver/gold/copper/aluminum  point and aluminum wool pads on TerraSkin paper, is 18 x 18 inches, rather large for a drawing. But the painting is even larger and bolder – 24 x 24 inches, attached to a wood board two inches thick. It repeats the same feathery patterns, but now in brilliant carmine red. At first, the structure seems the same, but on looking further we see that the swirling patterns are different in each. Both contain mysterious empty squares, but in different places. The swirls remind me of Leonardo’s depictions of water and strands of hair. The movement contained within squares gives the whole composition a contrapuntal feeling. Schwalb does, in fact, succeed in one of her goals: to create visual equivalents of music. 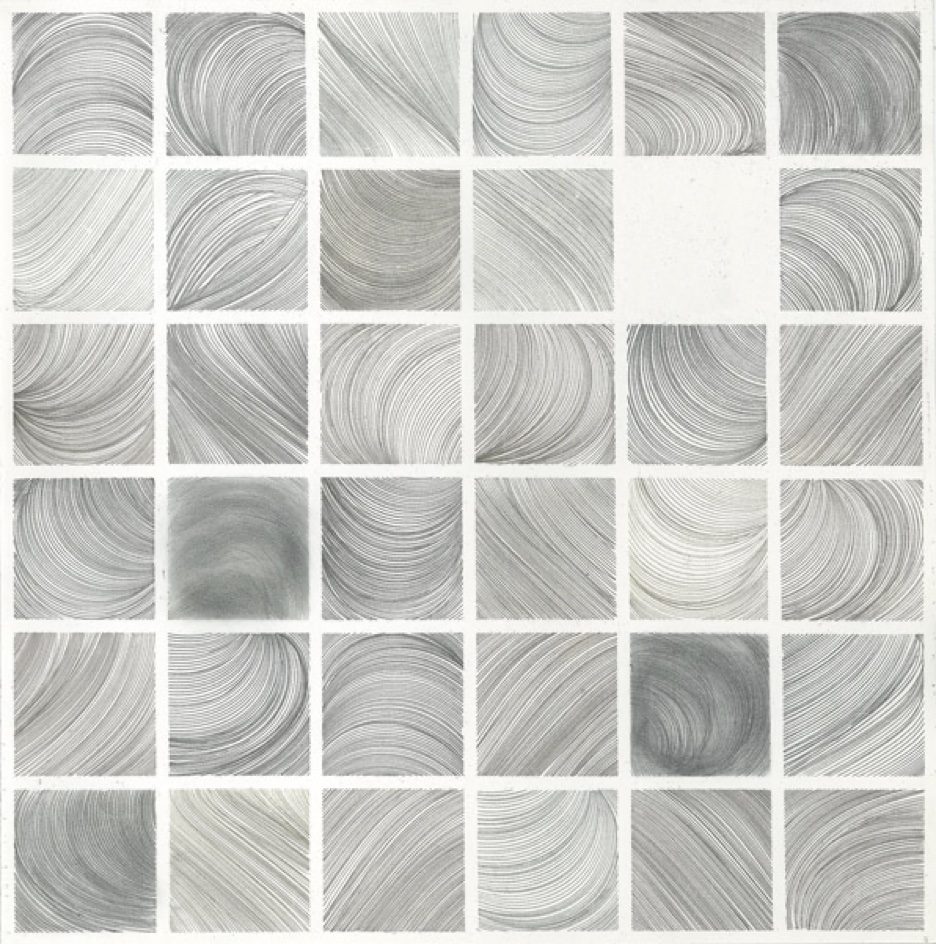 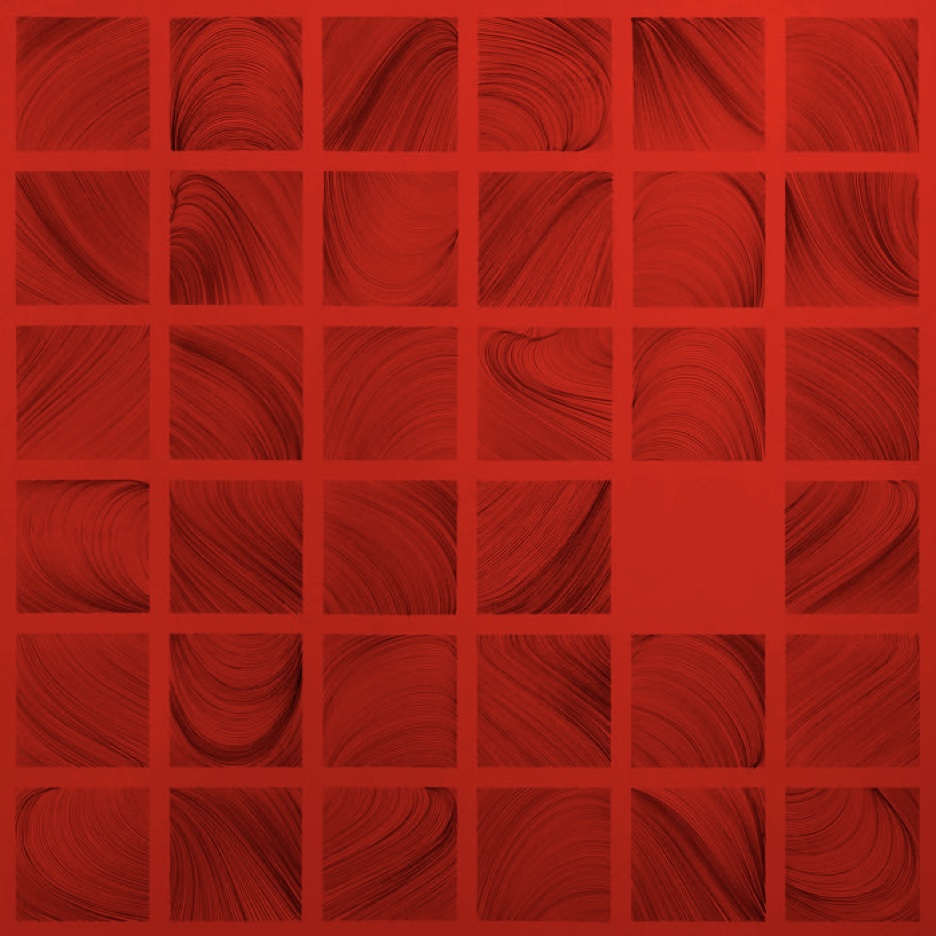 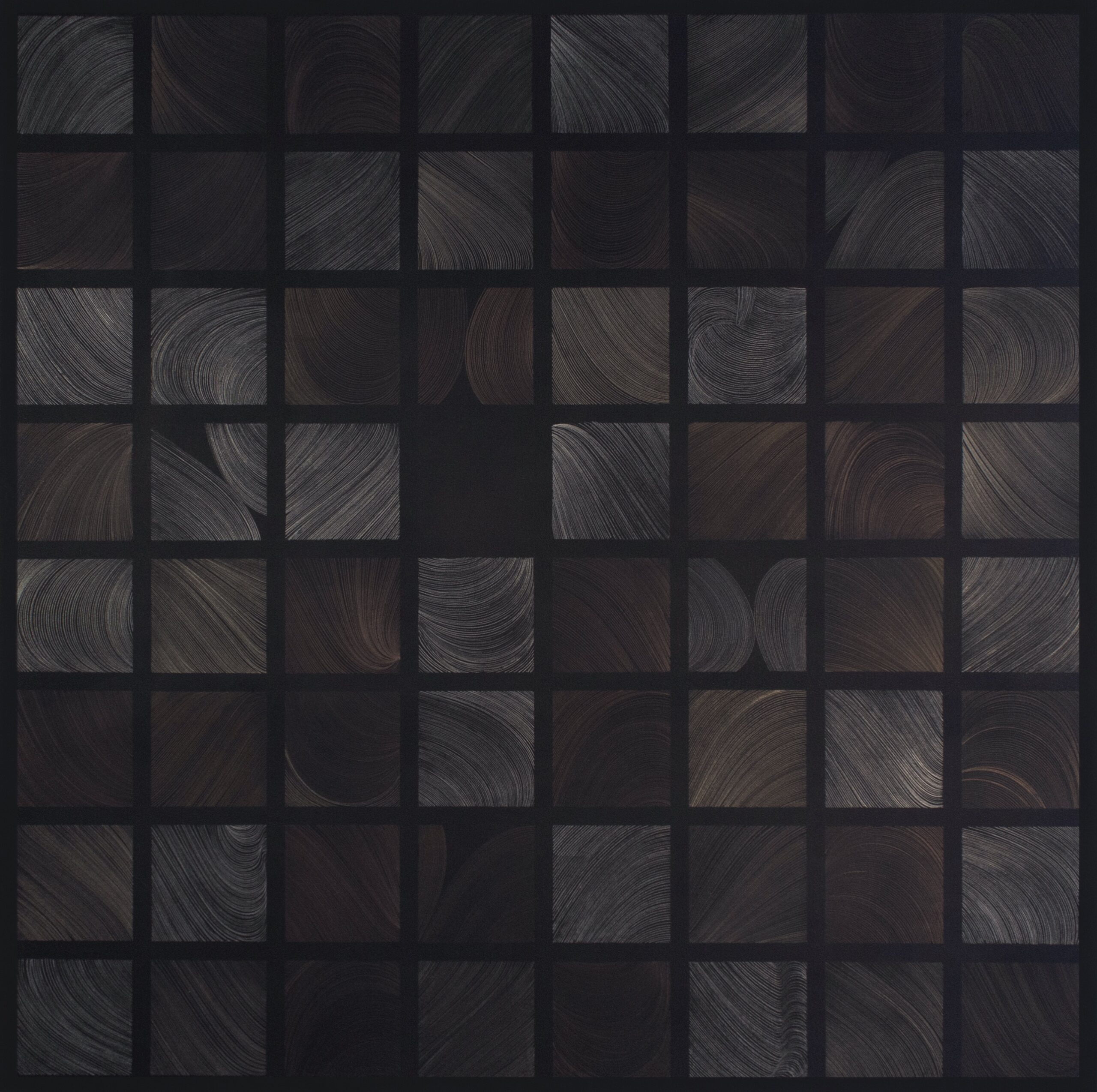 The just finished “Harmonizations XVI” is larger, more somber, and has a ghost-like aura. Instead of 36 squares, Schwalb has painted 64. The black lines around the squares are starker and more jolting than those in the other two.

There is a blank, empty square in each of the “Harmonizations.” Schwalb has explained that these refer to “one whose life is ending.” When she began the series, she was reading about the Hassidic legend Lamid Vav, which tells of the righteous people who would save the world. She began with 36 squares, as this was the number needed to avert tragedy. She has written:

I was reading about this legend (and I have only scratched the surface so far); a dear friend of ours, Morris Hollender, a holocaust survivor, began to die. I began to [wonder] if I had ever met a Lamid Vav, and I believe I had in the person of our friend. So I started to make this series of works using 36 squares. I have left one blank symbolizing one whose life is ending. It gradually became a more abstract series with the concept of the void.

This last, #XVI, is especially poignant because Schwalb’s beloved husband had just died.

We can also counterpose the drawing “Intermezzo #19” with the painting of the same year and name: “Intermezzo #XXV.” 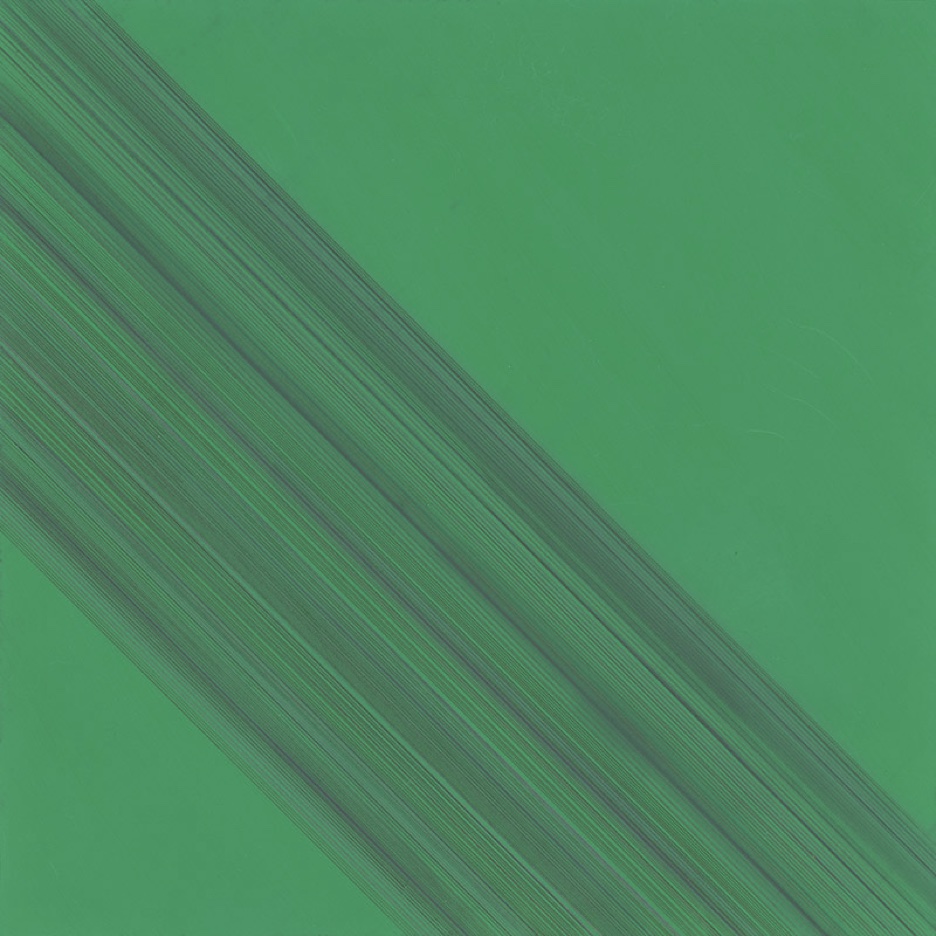 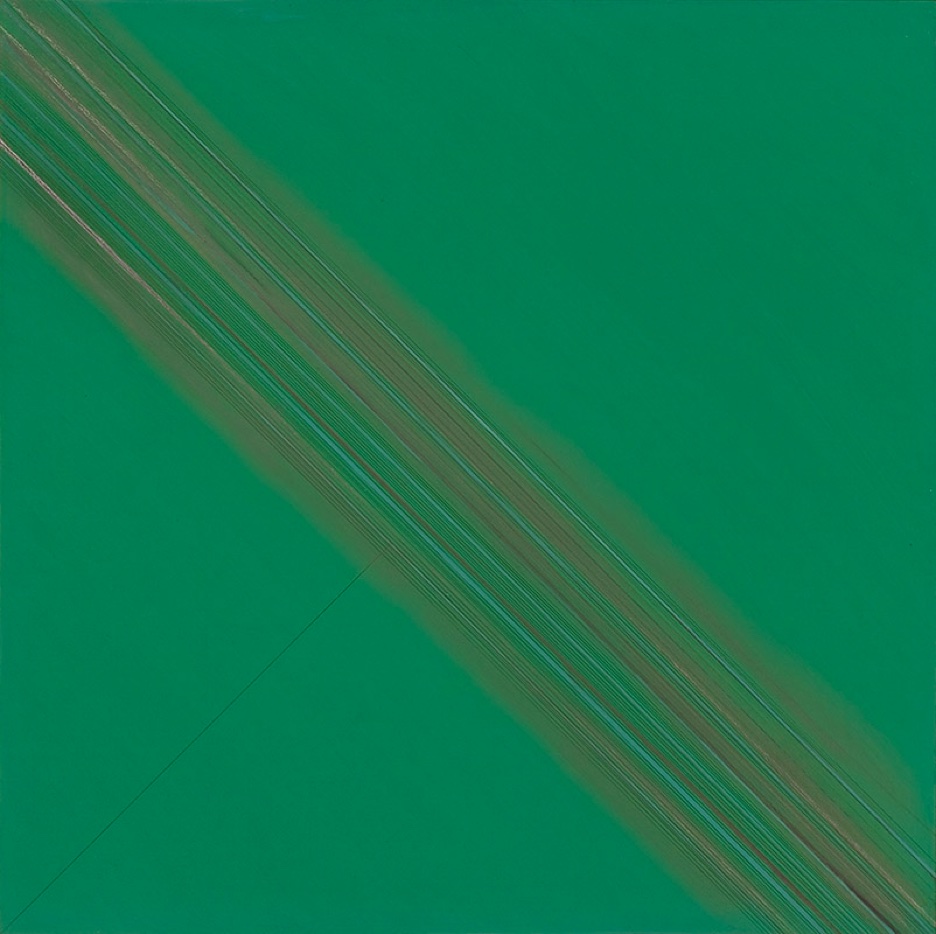 The drawing has a wider swath of fine, tremulous lines cutting the green background diagonally, exposing large expanses of green on either side. But the painting has a narrower and longer path of lines, creating an entirely different kind of movement. And from the side, the painting looks different still, far more sculptural/architectural. Although both works are abstract, my mind creates different images or pathways from each.

Titles of other series of drawings and paintings include “Currents,” “Poetry of the Square,” “Convergence,” “Polyphony,” and “The Road Not Taken.”

All of Schwalb’s work contains abstract principles, especially those of movement. But Schwalb’s elegant linear movements are always contained within geometric frameworks and solid grounds.

I asked her if “Poetry of the Square” is an homage to Joseph Albers and his numerous works titled “Homage to the Square.” She answered that she loves Albers’ work and studied his color theory when she was in art school. She added, “As this series evolved and I added the square in the middle, I came up with the title. But it is a nice thought that it is in a subconscious way a homage to his wonderful paintings. I saw the show at Zwirner of Albers and Morandi last fall, and in a strange way Albers helped me appreciate the Morandi paintings that I hadn’t been that interested in before.”

Susan Schwalb has created a body of work that is infinite within limited boundaries — a kind of paradox. She continues to be a prolific artist, refuting any notions of sexism and ageism. Her art is nothing less than evidence that a contemporary woman can “master” an age-old technique, and this is the reason for my title.

Susan Schwalb was born in New York City in 1944. She studied at Carnegie-Mellon University and has had over 50 solo exhibitions in galleries and museums world-wide. Her work is represented in most major public collections, including The Museum of Modern Art, New York, The Metropolitan Museum of Art, New York, the Kupferstichkabinett, Berlin, the Ashmolean Museum, Oxford, the Yale University Art Gallery, New Haven, and the British Museum, London. Her book, written with co-author Tom Mazzullo, Silverpoint and Metalpoint Drawing: A Complete Guide to the Medium, was published in 2019 by Routledge/Focal Press, UK. Currently her work is included in Line into Space, Museum of Fine Arts/Houston through December 31, 2021.

4 Comments on “Art of a Contemporary “Old Master””