The Art of Diane Churchill 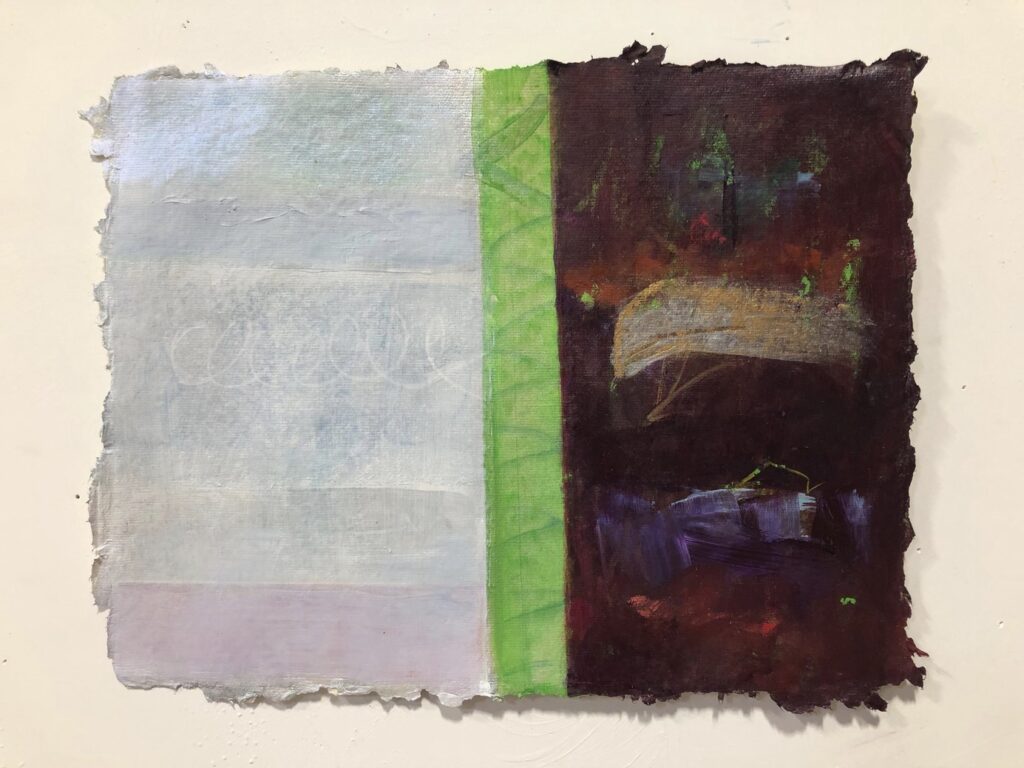 Diane Churchill’s art works entranced and fascinated me from the start.

I immediately observed instinctive synesthetic characteristics; movement, subtle variations of color, and an overwhelming love of nature, vibrancy, and musicality permeated every piece. However, unlike Carol Steen, whose art I discussed in the previous issue, she did not think of herself as synesthetic. Her response when I suggested it was “Really?”

Churchill’s sense of color, light, movement, layering, and subtlety felt musical to me.  And, indeed, she has confirmed that she hears sounds connected with colors. “When I was a child, between eight and 12,” she said, “my best friend was my piano; that’s where I poured my feelings.”

Although she calls herself an abstract painter, she was delighted when I remarked that her art is only abstract to other people, and not to her. And she loves Carol Steen’s work, as well as that of other synesthetic artists, such as Van Gogh, Joan Mitchell, and David Hockney. She uses colors symbolically, and like Steen, has an “enchantment with gold . . . something otherworldly.”

Starting with her most recent work, titled “Get the Beat,’ I noticed a kind of bilateral division. 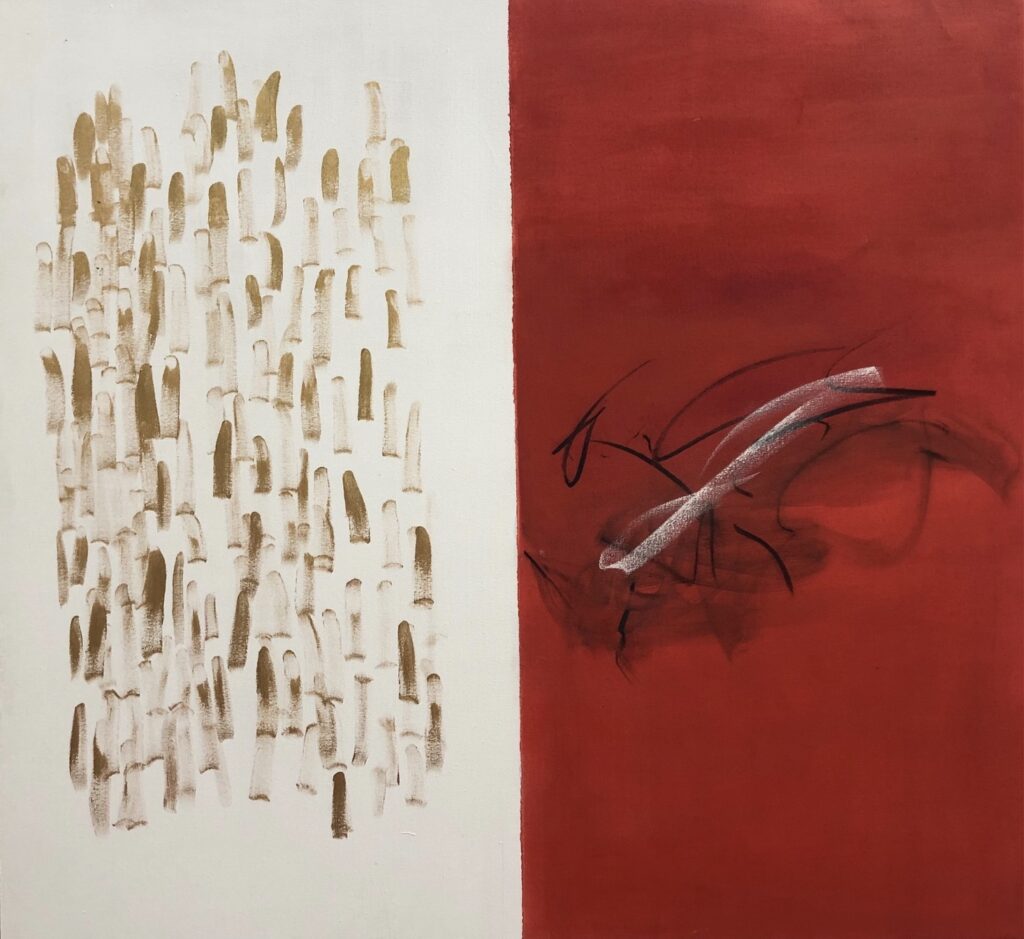 This split of canvases in two is characteristic of the majority of Churchill’s work. She acknowledges that this is the case, although she doesn’t know why. Of the left side, she says, “It was the idea of getting completely captured by the beat, and not controlling anything.” Conversely, the other side took her a long time. 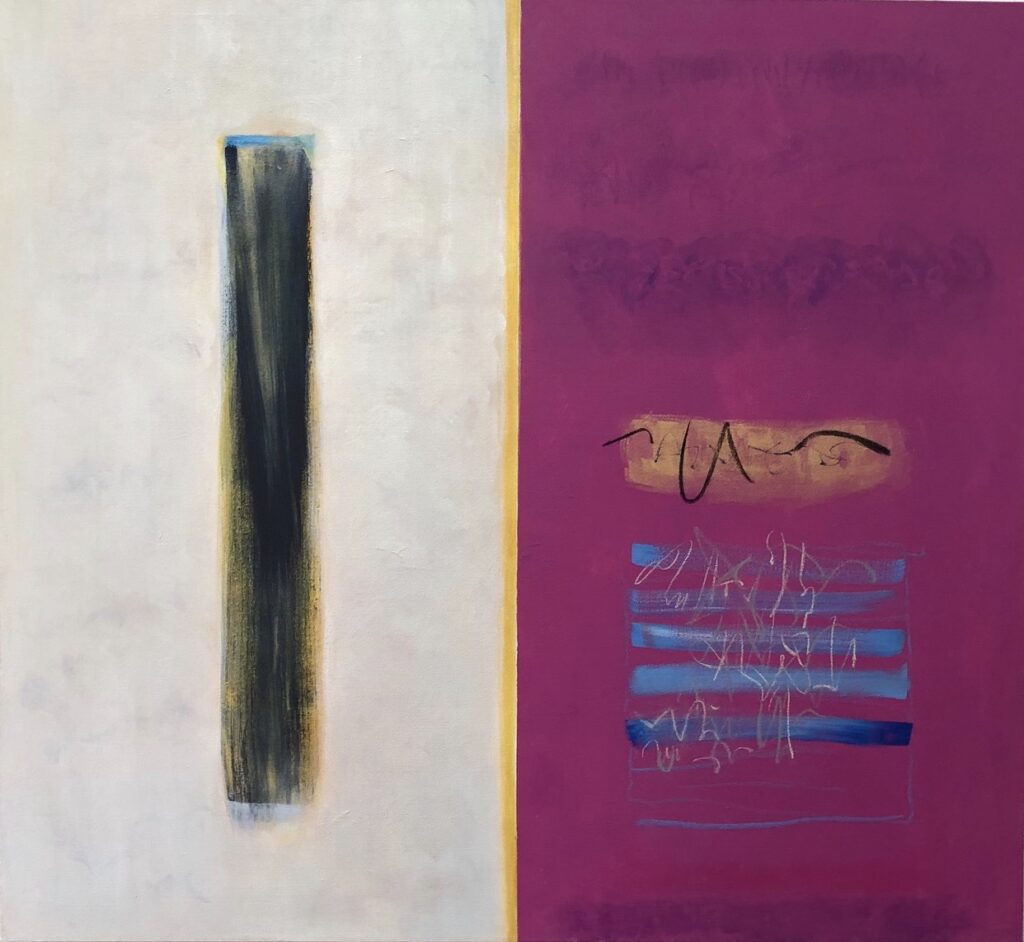 Pavane, (after Fauré), she describes as having a “duple rhythm,” and states that these are “duple paintings.”  This was the painting that she thought most consciously related to music.  In mentioning the “writing” on the right side, she said, “I was hoping that the white calligraphic markings look like dance notation.”  When I mentioned that I also see a framework of a musical staff underneath, she readily agreed with me.

She also loves writing and the interrelationships between writing and mark-making in painting. At one point in our conversation, she quoted van Gogh as saying, “Sometimes I don’t know if I am writing or drawing or doing both….”

She called a series of small paintings and mixed media works she made between 2017 and 2021 “pages from a lost book.” 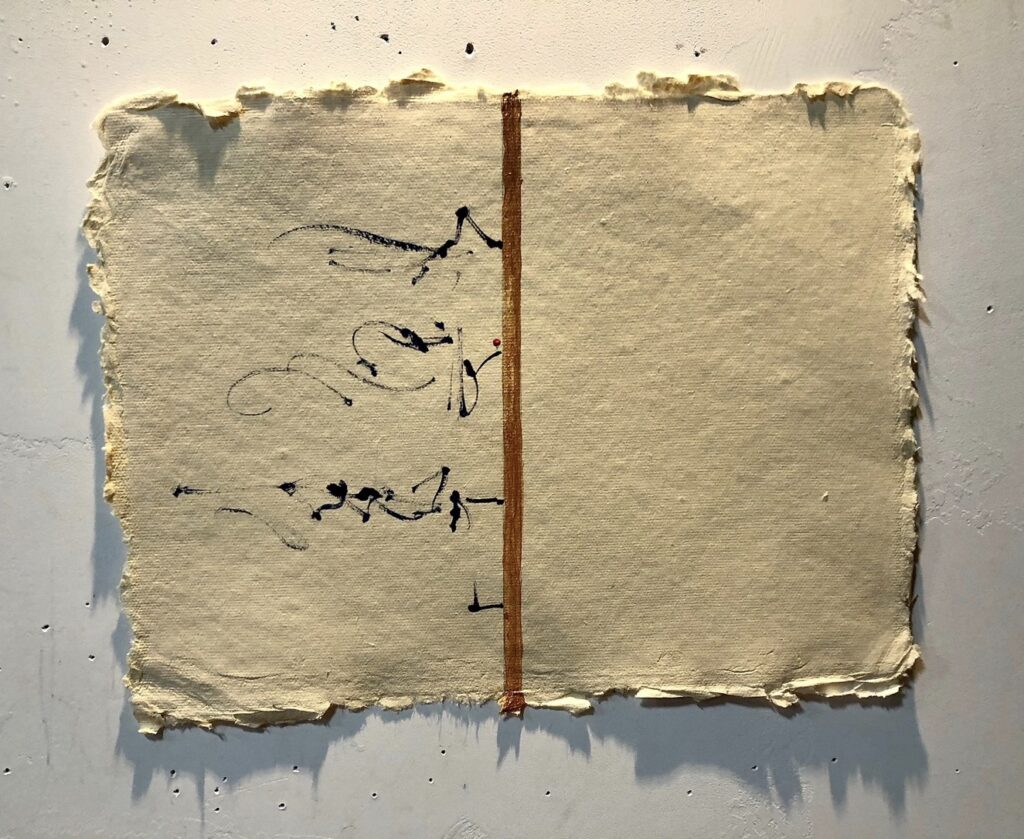 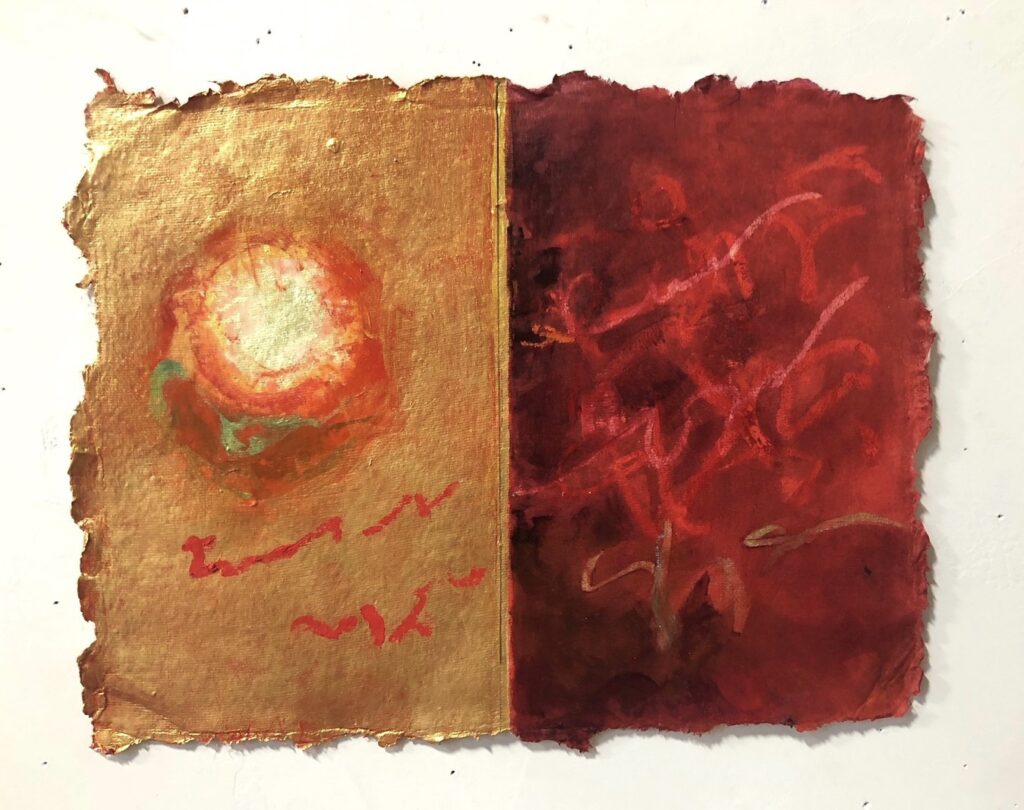 Her love for textures often inspires her to mix pastels and acrylics. And in many paintings, she uses an “invisible” transparent oil pastel that only becomes discernible when painted over.

In the following painting, Old Brown Earth, she employs this mixture to reveal subtle layers of color. She has said that “brown is a maligned color.”  This seems to be another indication of synesthesia: personification. The colors have a personality, and the artist expresses her feelings towards them. 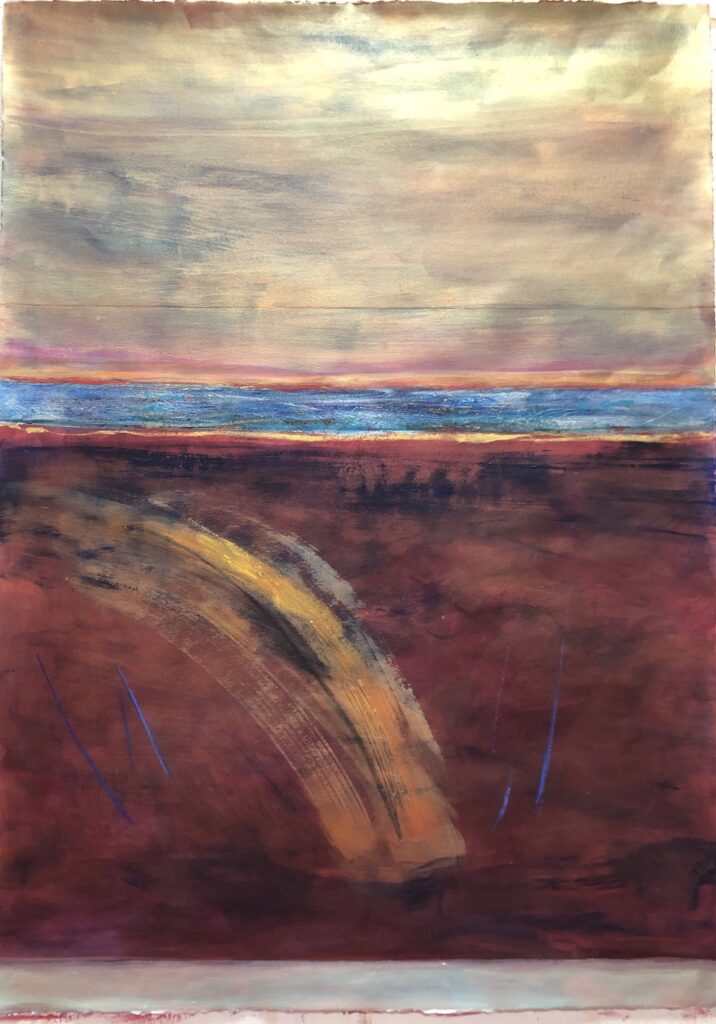 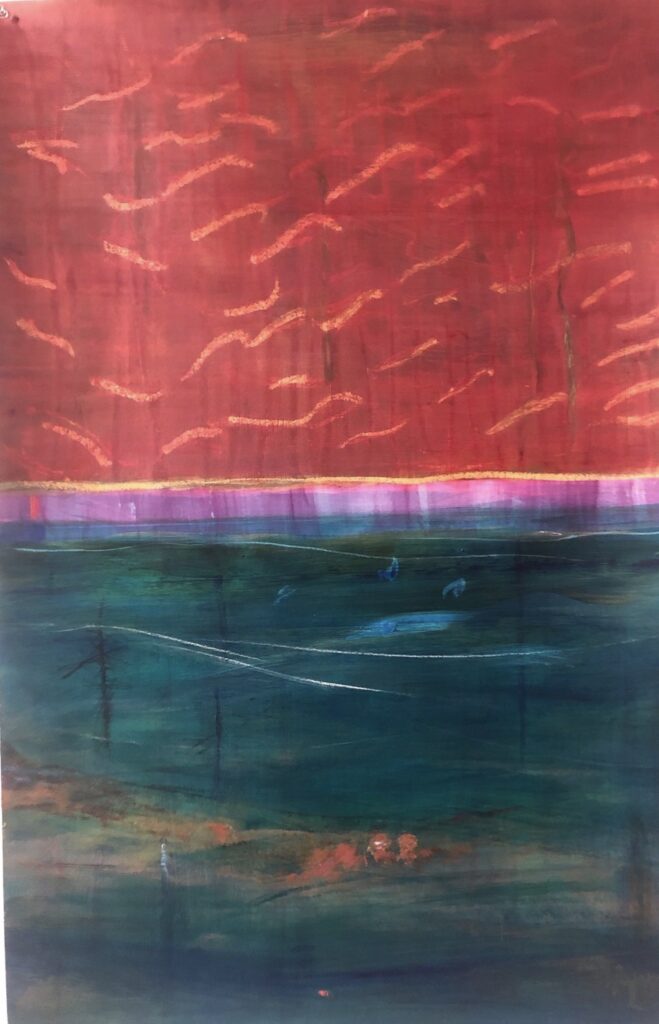 The painting above, Fire, Water, part of a series called Above. Below, convinced me beyond a doubt of Churchill’s synesthesia. The wavy, repetitive comma-shaped marks on the Fire section resemble similar markings by Van Gogh, David Hockney, and others.  Indeed, those who study synesthesia have come to call them “Kluverian” forms after the form constants discovered by the experimental psychologist Heinrich Kluver during the 1920s.

Diane Churchill never thought of herself as synesthetic, but “after this conversation,” she told me, “I am happy to join the club!”

Diane Churchill is a painter living in Nyack, N.Y. with a studio at the Garner Arts Center in Garnerville, New York.  She exhibits frequently in Rockland County and New York City.  Her most recent solo show was at the Rockland Center for the Arts in West Nyack in May, 2021. A two-person show in February 2020 was at Ray Lagstein Gallery in Nyack. Since the pandemic, she has participated in virtual shows at Soho 20 Gallery, Hammond Museum, Westchester Art Guild, and New York Artists Circle, and in physical spaces at the Pelham Art Center, Sitka Gallery, El Barrio Project Space, and Carter Burden Gallery in Chelsea.

She received a degree in art history from Wellesley College, attended the Brooklyn Museum Art School, and later received an M.A. in Painting from Hunter College, studying with Ray Parker, Mark Rothko, and Leo Steinberg. 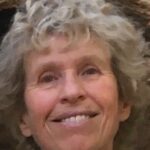 Greta Berman received a B.A. from Antioch College, an M.A. from the University of Stockholm, and a Ph.D. from Columbia. She has been Professor of Art History at Juilliard since 1978. In addition to writing a monthly column, “Focus on Art,” for the Juilliard Journal, she co-curated and co-edited Synesthesia: Art and the Mind with Carol Steen, at McMaster Museum of Art, Hamilton, Ontario in 2008. She and Steen also published a chapter titled “Synesthesia and the Artistic Process” for the Oxford Handbook of Synesthesia (Oxford University Press) 2013. She has published numerous articles, as well as lectured on synesthesia, and other subjects.
Home | Archive | Issue: Fall 2022
Next: Turning Points »

2 Comments on “The Art of Diane Churchill”