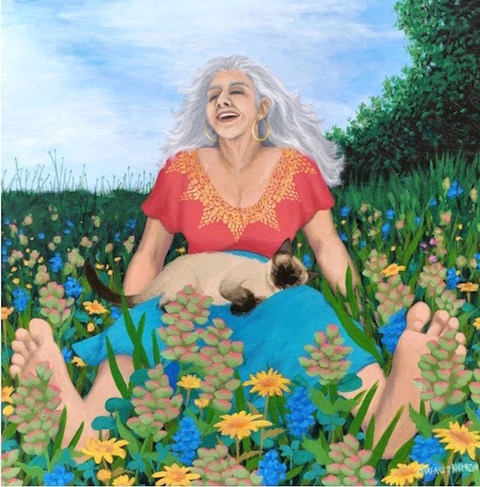 Cat Woman, acrylic by Margaret Karmazin
I was changing the load in the washer so Bruce answered the phone.

By now the laundry was forgotten.  “Bruce, what was that all about?”

“It seems that Mom went shopping at Piggly Wiggly, and when she was walking home, she waited to cross Oakton at the crosswalk. Even though it’s a marked crossing, cars were not stopping to let her cross. She got so annoyed that she opened the carton of eggs she just bought and began lobbing eggs at the cars that didn’t stop. She was finally able to cross to the median, but then the same thing was happening and she dealt with it the same way. The driver of one of the cars she hit called the village cop. Officer Riley was just down the street and got there right away.”

“The driver did a U-turn, followed Mom, got out of his car and was screeching at her about suing for damages to the paint on his new Tesla. Officer Riley suggested that he just settle down and that a trip through the carwash should take care of any possible damage. The driver wanted Mom charged with vandalism or criminal mischief.  He backed down pretty quickly when Officer Riley reminded him that he was admitting to disregarding a crosswalk sign and that he could face a fine and possible charges. So he got back into his Tesla and drove away.”

“She’s okay.  Officer Riley took her down to the police station. He asked if I could come get her.  Oh, yeah, she wonders if on the way home I could take her back to the Pig.  She needs more eggs.” 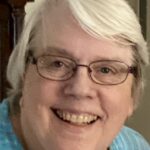 Kathleen (Kathy) Sampson is a recent resident of a senior living community. It is nice to be able to write and not worry about household duties. She has been a member of Kathie Giorgio's AllWriters Workshop for several years. In the past, she wrote the Master Plan for a town in Indiana, the Fraud Investigator's Manual for the Wisconsin Department of Health and Family Services, and a number of plays, poems, and stories. 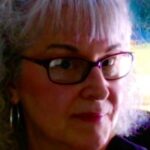 Margaret Karmazin works in acrylics on canvas or canvas board. Her work has appeared in literary magazines, We'Moon and SageWoman.