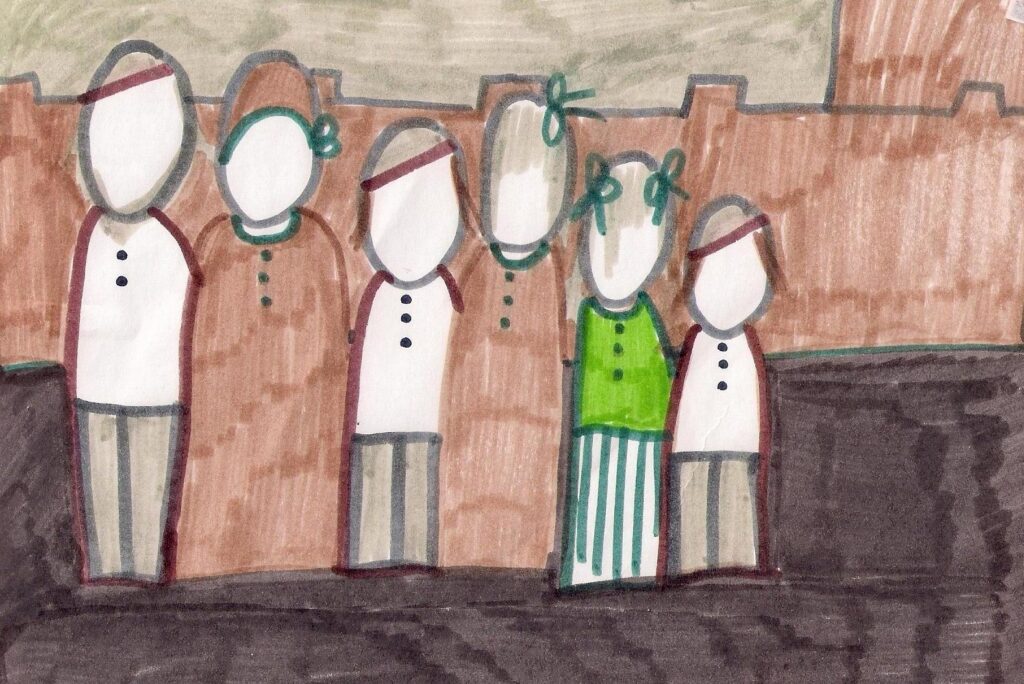 Family, digital painting by KJ Hannah Greenberg
Sandstone apartment buildings of two to four floors loom past the dunes. It will take me less than half of an hour to reach them.

At the bottom of the last dune lies an artificial lake. Families guide paddle boats in its waters. The adjacent playground is full of children running, screaming, climbing, sliding, and swinging.

I skirt the lake and playground. At last, I walk on asphalt. I count trees. Olive. Oak. Pine. Tamarisk.

Three olives and two tamarisks later, I find the building. A lycium has been planted since my last visit. It nearly threw off my count.

Exhaling in a manner that I hope is inaudible, I walk into the lobby and eye the stairs. The door I seek is on the third floor of this building, a building without elevators. I sigh, again.

Tread over riser, tread over riser, I climb one floor. On that landing, I open my canteen, make a blessing, and sip. My feet throb. My knees hurt. My lower back is spasming. My physical limitations are among the reasons I haven’t sought this address in a very long time.

I cap my flask, say another blessing, make another sigh, and proceed toward the second flight. It has as many steps as did the first.

One by one, I climb them. Despite the heat and glare, my trek across the sand seemed easier.

The apartment’s residents rarely call. They visit me even less frequently. Most of our connections are made at my behest.

I shake my head. I am tired.

Feet can be soaked in Epsom salts. Knees can be soothed with arnica creams. Backs can be adjusted by chiropractors. Heartache, though, cannot be fixed by cardiologists. What’s more, no therapist of integrity can authentically promise to be able to reassemble my broken bits.

I sit on the bottommost tread of the second flight. They have no knowledge of my trek. They know only snippets about my health. My appearance at their door will be a surprise.

I pull a rag out of a pocket and dab at my eyes. At least some sand gets cleared from them.

Other than an increase in pain, my journey up the second flight of stairs is uneventful. I do not drink more water as I have to save some for my return.

Perhaps I linger on that landing for ten minutes. Perhaps I linger for an hour. There are no windows in the stairwell, so I have no external referent by which to mark my pace.

Only a single flight of stairs separates me from the floor of the apartment. I can still return with no one discovering that I have tried to visit. I sit on the floor and reconsider.

I wonder if they’ll bother to attend my funeral. Likely, they’ll be happy with the monies I am bequeathing to them. Likely, they’ll mourn me, on holidays, and on the anniversary of my death, but only in a perfunctory way.

My homecooked meals have been replaced by social media-posted sups. My careful budgeting of hand-me-downs and discount purchases went the way of Sumatran rhinos when designer togs became within their reach. My decades of emphasizing Hillel’s prime dictate, “what is hateful to you, do not do to your fellow,” was tossed aside as soon as outside influences paid for their apartment, their car, and trips to foreign “destinations.”

I was invited to life events only where photographers would create a record, but not to births. I was welcomed to goings-on when they deemed it convenient but was never asked to fully participate. I was reduced to a mark on their ancestral tree instead of being welcomed as a living legacy or even as an occasional font of life wisdom.

And yet, he is my son. They are my daughter-in-law and grandchildren. I have no other family. They should hear the news.

I climb that last flight of stairs. My sciatic nerve sends pain all the way to my toes. I am breathless upon reaching the third landing.

When I knock, a small human, who looks a lot like my son, answers. In disappointment, he announces, “Oh, it’s Grandma.”

My son comes to the door. He calls forward no other grandchild. My daughter-in-law continues her phone call. I can hear her laughter, but not her words, in the background.

I tell my son the doctor’s prognosis.

He mumbles a few words, offers no hug, kiss, chair to rest on, or refreshment, and then shuts the door.

I sit in front of his apartment for a while, willing myself to take the first steps back to where I dwell. Eventually, I stand up and begin to descend the many stairs. I am returning home. 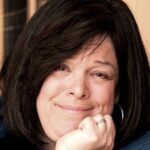 KJ Hannah Greenberg's poetry, fiction and paintings have been nominated for The Best of the Net in poetry, The Best of the Net in art, the Pushcart Prize, the Million Writers Award the PEN/Diamonstein-Spielvogel Award for the Art of the Essay. She had had more than forty books published and has served as an editor for several literary journals.

Her images have appeared as interior art in numerous magazines of the arts and as cover art in Angime, Black Petals, Door is A Jar Literary Magazine, Impspired [sic], Pithead Chapel, The Broken City, Torah Tidbits and  others. Additionally, some of her digital paintings are featured alongside her poetry in One-Handed Pianist (Hekate Publishing, 2021).

3 Comments on “Returning Home to Die”