The Place of No Return
by Renée Henning 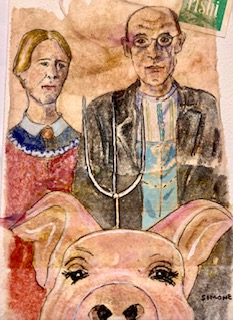 American Piglet,
watercolor, gouache & ink on recycled tea bag,
by Linda Simone
“I never should have made a deal with the devil!” Deborah Nash told herself.  “But it seemed like a good idea at the time.”

The woman knew why she was in hell. It was because of her murder contract with Lucifer. Desperate for money to save her failing business, she had arranged a homicide.  In exchange, the agreement gave her a billion dollars and, allegedly, fifty more years of life.

Deborah had assumed she would live like a monarch for five decades and avoid Hades by atoning for her crime. However, there was a trap in the contract. She forfeited the half century of life and died at Satan’s hand before she could repent — and before she could spend a penny of her colossal fortune.

Like other daughters of Texas, Deborah was spirited and strong-willed.  Her last words on earth were, “Tonight I’ll join hard-core evildoers in hell, but I’ll become their ringleader. The devil was toying with me all along. Now it’s my turn to make his life hell!”

The underworld proved to be far worse than she had imagined.  She despised the other inmates (all villains), she loathed the food (for example, moldy lice), and she detested her sleeping accommodations (a sinkhole).

The working conditions were also intolerable. There were no days off. The damned labored for eighteen hours daily in hellfire at a job that drew on their earthly talents.  (Former executioners spent eternity exterminating butterflies.)  The remaining hours were devoted mainly to nightmare-infused sleep.

After six weeks in the abyss, Deborah knew enough to begin her war on Beelzebub.  The plan called for her to become the alpha prisoner by banding together some of the most dangerous outlaws in history. She needed three monsters from different continents to back her insurgency against the devil.

She moved to the front of the filthy, sullen horde.  She climbed a coal mound, took a deep breath, and shouted, “Where can I find Jack the Ripper?”

A month later Deborah was in talks with British serial killer the Ripper, American gangster/assassin “Bugsy” Siegel, and Iraqi mass murderer “Chemical Ali” Hassan al-Majid. Each man led an army composed of millions of desperadoes, and the armies fought frequently.

The Ripper, Bugsy, and Chemical Ali would never accept one of the others as boss.  However, Deborah persuaded them to defy Lucifer by declaring a truce and serving as generals under her command. The men started having friendly debates about the respective merits of knives (the Ripper’s favorite), guns (Bugsy’s passion), and poisons (Chemical Ali’s delight). They were becoming pals, bonded by their hatred of Satan and their love of lethal weapons.

A year passed. To the fury of the devil, who expected blind obedience from his subjects, the revolt had spread. The hellions battled for better living and working conditions while their chief remained incognito. Each day brought strikes, cases of sabotage, and riots.

Subtle acts of defiance also created problems for Satan. For example, they affected his wardrobe. The devil often appeared in a jaunty hat, tailored suit, and hand-sewn shoes. The outfit hid his horns, tail, and hooves from earthlings he was tempting to sin.  Since he wore shoes only once, the best cobbler in Hades had to produce a pair daily.  Now the fellow, blaming an imaginary sickness, turned out a single shoe.

Another example involved Deborah (or, as Beelzebub referred to her, “That Female”). In life she had been the president of a Texas oil company and had negotiated tough deals. Her job in the netherworld was to prepare airtight contracts between her nemesis and mortals willing to barter their souls for gain. Sometimes Deborah deliberately included a loophole in the agreement, and thus the intended victim escaped perdition. When Lucifer raged, she would say innocently, “But it was just a typo.” He felt surrounded by anarchists, hypochondriacs, and slaves too lazy to check their work.

Eventually he began to suspect that the brilliant author of his contracts, That Female, was the person running the insurrection. He dispatched his best spy, Mata Hari, to shadow her.

The next night Deborah spotted the traitor and acted swiftly. She sent a message to the Ripper, Bugsy, and Chemical Ali. It read, “X is on to us. I saw Mata hanging around after our meeting ended minutes ago. Run!” The rebel leader and her generals fled to their secret hiding place near a volcano.

As the number of rioters grew, Deborah started to organize battles from her smoky cave. Some hellions rallied around her cause, and others, through fear, sided with Satan.  He resented having to use water cannons to defend his territory because the water put out his beloved flames.

Livid, the devil came up with a different strategy for regaining full control of his realm. He requested a meeting to broker a peace. Deborah, fearing capture if she left her hideout, sent a terse answer: “Never.”

In a compromise, the opponents held a telephone conference. Beelzebub opened the discussion by ordering an immediate stop to the mutiny. “You have no idea with whom you’re dealing!” he roared. “Don’t underestimate me. I have vast powers!”

“Well, don’t underestimate us,” Deborah retorted. “We have vast numbers. Didn’t you notice how crowded it is down here? Sinners already take a number and wait in line for days merely to enter this dump.”

“My kingdom will always have room for more,” Lucifer said. “Meanwhile, I will stop at nothing to shut down the strikes, riots, and warfare.”

“Most of my supporters will also stop at nothing to get what they want,” the woman replied coolly. “Actually, that’s the reason they ended up in this furnace. Threats and punishment won’t deter us. You can’t massacre us and send us to the inferno because we’re already there.” 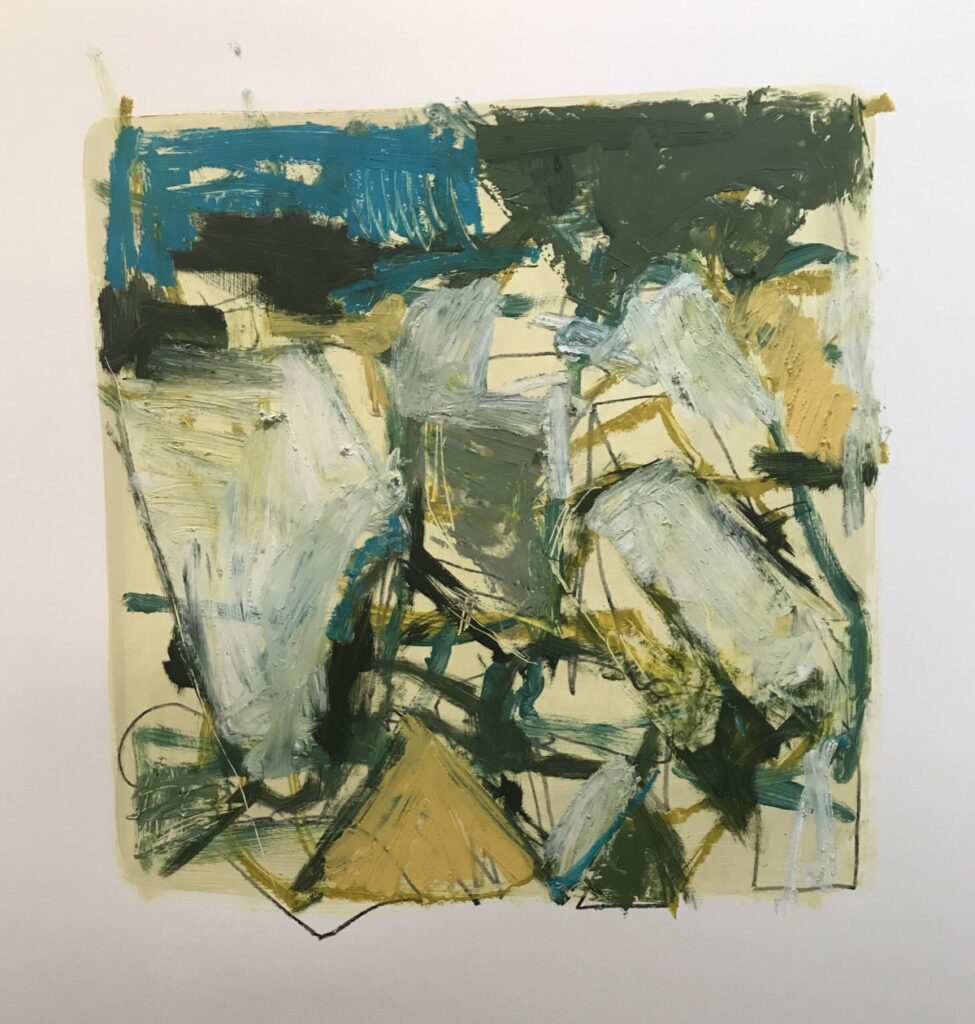 The parties had reached an impasse when Satan made a stunning concession. He did it convinced that the rebellion would fizzle without Deborah. He offered to restore the fifty years on earth she had forfeited the previous year. The woman would have time to atone for her misdeeds and hence a chance to avoid a second trip to Hades.

Deborah was shocked into silence. After a long pause, she responded, “I will accept your offer on one condition. The deal must include a weekly day of rest for the wretches I’ll leave behind.” The Ripper, being Christian, proposed Sunday off; Bugsy, a Jew, argued for Saturday; and Chemical Ali, a Muslim, insisted on Friday. Just before they came to blows, the woman got the devil to agree to Wednesday as the day of rest for the inmates of the underworld.

The teleconference included one last surprise. Beelzebub said to Deborah, “Let me help you get to heaven.”  Then he gave her tips on how not to wind up in Hades when the five decades were up. She took detailed notes during this part of the conversation.

Lucifer’s valet was present for the phone call. Afterward he said timidly, “Sir, are you sure Deborah will return?  If she follows your advice, you’ll never see her again.”

Satan answered, “Are you certain  I like having her here? I’m sick of complaining, demanding, assertive American women. Of all the troublemakers in hell, they are the worst, and That Female is the worst of the worst. Besides, nobody knows her final destination yet.”

In fact, the devil both admired and hated Deborah. (It was because, for the first time in millennia, someone in Hades had stood up to him.) On his list of foes, she ranked right below his archenemy, the Lord. Beelzebub hoped she would never come back. He wanted his domain to revert to normal and stay that way.

The following week the two adversaries signed a contract that set forth their oral agreements and the terms for her safe passage home. Lucifer’s signature scorched the paper.

The woman, after saying farewell to her loyal generals, became the first human ever to leave The Place of No Return. On her way out, she and Satan looked at each other with respect. He tipped his hat to her. Deborah smiled and waved good-by. She was already thinking about all the luxuries she would buy with the billion dollars in her foreign bank account.

The devil was also in good spirits. He considered the woman’s second chance a win-win situation — for him.  In fifty years she would either bounce back to hell or enter paradise. He was rooting for That Female to land in heaven — and to make God’s life hell!

Renée Henning is an attorney and an international author.  Her written work has appeared in her book Mystery and the Adopted Child and in other publications in North America (e.g., Washington Post), Europe (e.g., Oslo Times), Asia (e.g., ActiveMuse), Africa (e.g., Modern Ghana), and Oceania (e.g., Freelance).  In 2021 one of her short stories was nominated for a Pushcart Prize. 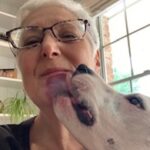 2 Comments on “The Place of No Return”