An Intersectional Artist Before the Fact
Art by Howardena Pindell

Introduction: The Political and Autobiographical Art of Howardena Pindell

I wonder if one day someone will come up with an “ism” describing and including artists like Howardena Pindell, Julie Mehretu, Niki de Saint Phalle, Yayoi Kusama, Louise Nevelson, Louise Bourgeois, and Grace Graupe-Pillard. All of these women have made use of both abstraction and representation. And all have used playfulness and satire subversively to express their anger.

Howardena Pindell is an African American artist born in 1943 in Philadelphia. After completing an undergraduate degree at Boston University, she did graduate studies at Yale, worked as a curator for twelve years at the Museum of Modern Art (the first Black curator there), has been a distinguished professor at the State University of New York at Stony Brook since 1979, and has shown in numerous exhibitions since the ‘70s. Her work is in the permanent collections of numerous museums.

Pindell has always dealt with ways in which race, class, and gender intersect – what is now called intersectionality.

Today she is very well-known, having had numerous national and international solo shows, and been widely interviewed. Among honors recently received: in 2019, a College Art Association Distinguished Artist Award for Lifetime Achievement; the George Wittenborn Memorial Book Award from the Art Libraries Society of North America; an honorary degree from The Maryland Institute College of Art; and the Artist Legacy Foundation’s 2019 Artist Award. She also won a 2019 Archives of American Art Medal from the Smithsonian Institution.

But who is Howardena Pindell, really? And is she an abstract or representational painter? The answer depends on which works you see, as well as the interpretation of the viewer. Pindell is both, and more. Like the artist Julie Mehretu, currently showing at the Whitney, Pindell has often taken on issues of racism and activism, but combined them with innovative technique, abstraction, and layering. She told an interviewer,  “The racism at MoMA was what helped me with my art practice.” (She was left out of things…social events, etc.). Although she started out as a figurative painter at Yale, she quickly moved into abstraction. While at Yale, she learned about color from Joseph Albers, and was influenced by Ad Reinhardt, an Abstract Expressionist, best known for his allover “black” paintings, which looked ahead to Minimalism.

Circles became a major element of her work early on, as they continue to be. She punched holes in manila files, spraying paint through them. The circle is, indeed, a kind of metaphor for her work and life, as she has circled back and forth through styles, subjects, and layers; unsurprisingly, she loves Seurat. Going from grids to circles, collecting cuttings from mats MoMA threw out, and using hole punchers and the chads for layers constituted a kind of “play aspect” of her work.

When she could not afford to buy clothing, she sewed her own. She also used thread to sew pieces of canvas together. Pindell does not see her work as quilts, however; in fact, despite their decorativeness, these art works exude a subtle rage.

When a massive car accident in 1979 nearly killed the artist – she suffered a concussion and numerous other injuries – she felt that she had to reconstitute her life, using shards of memories. She started using postcards, connecting them, trying to put pieces of memory back together again.

Pindell has said that her 1980 video, “Free, White, and 21,” is “KEY” – a piece that has “legs.” After that, she became overtly political and autobiographical. Her friendship with Ana Mendieta, the Cuban-American artist married to Carl Andre whom she is certain was murdered by him, deeply affected her. She lay down on the canvas, only later on realizing that she had been thinking of her friend whom she believes was thrown out the window.

Looking at the arc of her work, one observes Pindell returning over and over again to the figure. What is at the same time unique to her, but paradoxically shared with other women artists, is the amalgamation of pain, healing, memory, travel, and play in each of her works. Like Frida Kahlo, Pindell has made her art from the trauma and pain she has endured. Also, like Kahlo, there is a duality to her art. But it looks nothing like Kahlo’s work.

Just when you think you have begun to define her, Pindell comes up with something new. Howardena Pindell has worked through racism, misogyny, and now even ageism, to shine ever more brightly through her luminous and impossible-to-pigeonhole art works.

** All images are courtesy the artist and Garth Greenan Gallery, New York. 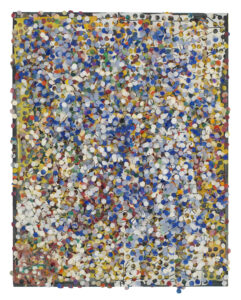 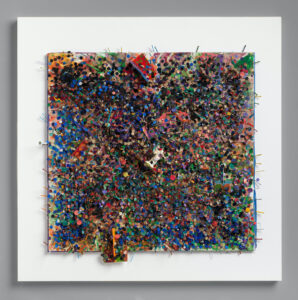 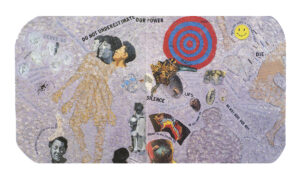 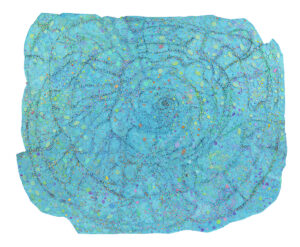 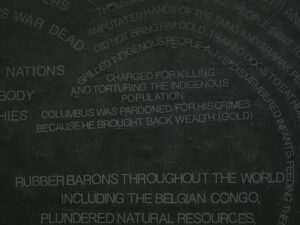 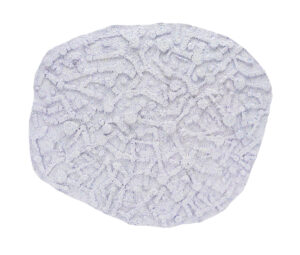 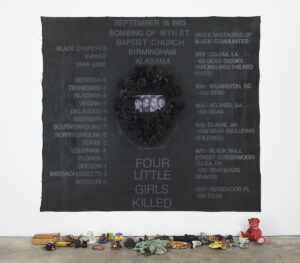 Howardena Pindell, born in 1943, is an American multi-media artist, who has also worked as a curator, writer, and educator. Her work encompasses both abstraction and the politics of racism and feminism.

Next: Poets from Elsewhere »
Home | Archive

13 Comments on “An Intersectional Artist Before the Fact”