Inherited Silence
Listening to the Land, Healing the Colonizer Mind
by Louise Dunlap 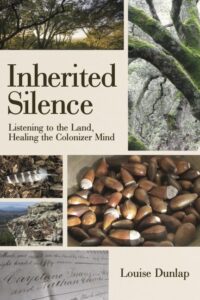 An insightful look at the historical damages early colonizers of America caused and how their descendants may heal the harm done to the earth and Indigenous people.

Inherited Silence tells the story of beloved land in California’s Napa Valley—how the land fared during the onslaught of colonization and how it fares now in the drought, development, and wildfires that resulted from the colonial mind. Author Louise Dunlap’s ancestors were among the first Europeans to claim ownership of traditional lands of the Wappo people during a period of genocide. Her ancestors lived the dream of Manifest Destiny, but remained silent about the violent displacement of Indigenous people that made settlement possible.

When Dunlap’s generation inherited the Napa land, she was already wondering about its unspoken past. What kept her ancestors from seeing and telling the truth of their history? What had they brought west with them from the very earliest colonial experience in New England? Dunlap looks back into California’s and America’s history for the key to their silences and a way to heal the wounds of the land, its original people, and the harmful mind of the colonizer.

The Secrets of Ohnita Harbor

In the context of escalating wildfires and a national reckoning with racial justice, confronts her settler family’s stories with the truth of colonization, showing how the colonizer mind has led to environmental devastation, genocide, and systemic racism. Inherited Silence invites readers to consider their own ancestors’ role in colonization and begin reparations for the destructive actions of those who came before.

For more information or to order, visit https://www.newvillagepress.org.