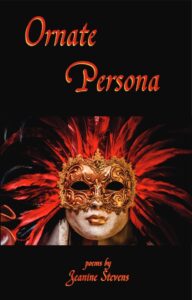 Stevens distills her gifts as a lyric anthropologist in this, her most introspective collection thus far. We sense that she’s investigating her own psyche, even while handling such themes as a Nijinsky ballet. Her associative dance leads us fluidly from poem to poem, as she empathizes with the gifted, ill-fated Tanaquil Le Clercq, celebrated dancer and muse to George Balanchine. And we become one body with Nijinsky himself, admiring our own sinew.

Stevens’ power to captivate guides us from a Joseph Cornell box to familiar 20th-century masterworks like the film Black Orpheus, then to the mysterious series of mandalas created by Carl Jung’s patient, Miss X. Stevens’ poetry keeps us reading, thinking, and feeling.

“Ornate Persona is like having front row seats to your favorite live performance. Your jaw will remain dropped in awe at the rich drama, movement and color of her poetry.”