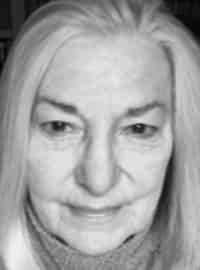 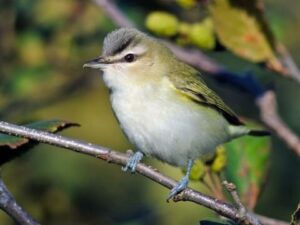 The noise, a soft thud, pulled Trixie into that space between sleep and awareness, where the first decisions of the day unfold. Open your eyes. She stretched her body in a long yawn under the duvet, rolled over, and watched as a red-orange smudge of autumnal sun rose above her windowsill. Rise and shine. Trixie sat on the edge of the bed, legs dangling, trying to remember what day it was. She stood, hands on waist, and bent from side to side, adjusting her disagreeable spine to the job of holding her 84-year-old body upright.

Then she remembered the noise.

She reached for her specs on the bedside table and shambled through the living room. Her eyes shifted to the sliding glass door that led to a patio. A bird lay on its back, one eye shut, the other at half-staff, feet curled into balls. As a self-taught ornithologist, Trixie knew that low-flying birds often confuse glass reflections – in this case, a shoreline of Longleaf pines – for the real thing. The impact stuns or kills, depending on the angle of collision.

She stepped out on the patio, still barefoot, and stooped over the bird for a closer look, noting the burnt-red iris behind its half-open lid. She’d never seen a red-eyed vireo up close. And only twice in the wild. Smaller than a mouse, this songbird dwelt in treetops, eating insects. In October the vireo should be en route to South America’s Amazon basin for the winter.

A dislodged feather lay next to the bird. Trixie examined it with a jeweler’s precision, then stuck it in her hair. Later, she’d add it to her stockpile of winged treasures.

She picked up the vireo, enclosing its fragile body in one hand. She thrilled to its tiny heart thrumming in her palm. “It’s alive!” she said aloud, as if her long gone husband were in earshot. After inspecting the bird’s olive-colored wings, white belly, and thick bluish legs for broken bones, she traced its distinctive black eyebrows with her little finger. She lowered the bird to the terra cotta floor, balanced on its chest, wings spread, ready to fly.

Day one of the red-eyed vireo: Trixie rode her Schwinn to Birds Unlimited, a couple of mini malls from her retirement complex on Hilton Head Island. She bought a handful of hawk decals for her glass door to ward off future bird strikes. (She’d replaced her Volvo with the Schwinn two years ago, when macular degeneration dimmed her eyesight … and her auto safety record. Since then, she and the bike had racked up matching scrapes and bruises from encounters with unseen potholes.)

Back home, the vireo hadn’t moved. Trixie drew up a folding chair, cracked the patio door so she could hear NPR’s afternoon programs, and watched the bird with the observational patience of her idol, Jane Goodall.

The communal dining room in Trixie’s retirement village opened at 4 pm. She sat at her preferred table for one, thumbing through her well-worn Sibley Guide to the Birds. Over a plate of crab hush puppies she learned that male and female vireos were virtually identical, but the males were the singers of the family. Trixie had a hunch that her bird was a male. After dinner, she sat with the vireo for a while, then climbed into bed, hoping he’d fly off by morning.

Day two of the red-eyed vireo: The bird had shifted, but not flown. Trixie found a shoebox in her closet and dumped out the high heels she hadn’t worn in years. After breakfast, she biked to the Sea Pines Forest Preserve and plucked a handful of Spanish moss – that’s neither Spanish nor moss – hanging from a 400-year-old oak tree. That afternoon, Trixie fashioned a cardboard hospice for the bird with the box and the moss.

The vireo was a meat eater, according to Sibley, with a sweet tooth for caterpillars and aphids. Trixie remembered an article in one of her nature journals titled, “Worms: The Other Red Meat.” At nightfall she crawled about in her small yard, carrying a flashlight and a soupspoon she’d nabbed during dinner; she scraped the ground, looking for worms. A half hour later, she dropped a still-squirming invertebrate into the shoebox. The vireo showed no interest.

Day three of the red-eyed vireo: Trixie half expected to find the bird dead. But, to her relief, he was alive and chirping. And he’d eaten the worm. She named him Perky.

Trixie dug up breakfast, then stood over the box and watched Perky swallow the worm in one gulp. She unearthed another for lunch. The vireo continued to chatter and hop around in his hospice box, swallowing worms and flapping his wings. Any minute now, she expected him to fly.

Days four and five of the red-eyed vireo: Trixie had dug up over a dozen worms. Her back was killing her. And the yard was a mess. Perky was eating, chirping, fluttering, but not leaving. She turned the shoebox sideways; if he wouldn’t fly, maybe he’d walk. No luck. She shook the box. Perky stayed put. The patient, now squatter, had his last worm.

Day six of the red-eyed vireo: Trixie woke at dawn, shuffled to the patio, and doused Perky with water from a spray bottle. Startled, he took to the sky, his wings beating almost as fast as a hummingbird.

He landed on the branch of a hickory tree nearby, groomed himself with vigorous swipes of the beak, then fell over backwards, tumbling into a thicket of spider lilies and hairy lespedeza. Trixie gasped. She crawled into the bushes to rescue him, exiting minutes later with new abrasions to add to her Schwinn collection. But no Perky. She searched the neighborhood, scanning trees, parting bushes, listening for the vireo’s song. That night she left the hospice box on her patio, hoping he’d return.

Day one without Perky: Trixie woke mid-morning and launched her thin, hunched body from bed with a groan. After a stretch or two, she brushed her teeth, flossed, swallowed pills, held a hot washcloth on her crusty eyes, and sat on the edge of the tub massaging her gnarled, aching feet.

Wait, was that a bird?

The vireo circled overhead twice before heading south. Trixie pumped the sky with her fist. 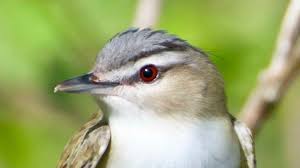 Here’s the thing about birds. They’re disappearing. Not just rare species like Meadowlarks, but the common backyarders – Dark-eyed Juncos, White-throated Sparrows, and most other songbirds. The losses are across the board: three billion birds gone since the 1970s. That’s almost thirty percent of the total bird population on the continent.

There are lots of reasons for the devastation, mainly loss of habitat. But also, pet cats, the birds’ most prolific predators; liberal use of pesticides on America’s forty+ million acres of lawns, golf courses, and parks; and finally, the ever-increasing number of bird strikes on doors and windows like Trixie’s.

Prudence Brown Lev is a confirmed boundary pusher at 82. She thrived in the male-centric publishing industry of the ’60s and ’70s as a reporter for Newsday, contributing editor of New York magazine, editor of Connecticut magazine, and vice-president of Grey Advertising. In retirement she became a firefighter, EMT, and a pilot – male fiefdoms of the second millennium. Her young adult novel, Lastborn, a science-based narrative of the last year of the dinosaurs, is available on Amazon. She lives with her husband in Rowayton, CT, and is writing a memoir.
Next: Birthday No. 61 »
Home | Archive