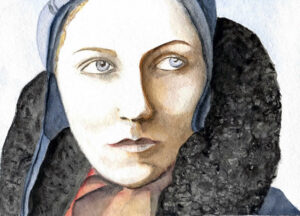 Aviator, watercolor/photoshop by Joyce Hoffman
Just over 50 percent of the United States population (and a hair under 50 percent of all humans on planet Earth) are women. Yet in the United States and around the world women’s strength in numbers is rarely reflected in directions taken in politics, business, religion, the sciences, the military, or other areas deemed important to the development of humankind. In this world, where increasingly money is equated with power and is an ever-growing factor in who rises to power, the UN Women website reports the unhappy fact that, globally, women are still only paid 77 cents for every dollar earned by men. “As a result,” the UN states, “there’s a lifetime of income inequality between men and women and more women are retiring into poverty.”

In the United States, nearly two centuries after women assembled in Seneca Falls, New York, “to protest against,” as Elizabeth Cady Stanton said, “a form of government existing without the consent of the governed — to declare our right to be free as man is free, to be represented in the government which we are taxed to support,” the male/female balance of power is still lopsided. Of the fifty states and five populated territories, for example, only ten have women governors (seven of them Democrats); of the 535 members of Congress, the Congressional Research Service reports, only 151 are women (127 in the House and 24 in the Senate, the great majority of congressional women Democrats). And, of course, no woman has ever been president of the United States. In Fortune 500 companies the same lopsidedness applies: in what one report on women at the helms of these powerful businesses called the “record-breaking year” of 2022, only 44 of the 500, or just under nine percent, are headed by women.

After decades during which U.S. women, with frustrating slowness, made much real and much only ostensible progress toward equality — acquiring voting rights, greater acceptance in the workplace (while struggling to nudge a bit closer to pay parity), and greater control over our personal affairs, including decisions regarding our own bodies — this slow progress seems to have stalled, or in some areas started to reverse. The most shocking example of this is, of course, the Supreme Court’s unconscionable reversal of Roe v. Wade this June — a decision that may well be a harbinger of more repressive SCOTUS decisions to come. Many state governments immediately moved to make abortion, and related medical treatments, more difficult, if not impossible. A story published on the United Nations News website shortly after the Supreme Court decision, and read by people around the world, bore the headline, “Overturning of Roe v. Wade abortion law a ‘huge blow to women’s human rights,’ warns [Michelle] Bachelet” (the UN High Commissioner for Human Rights).

This special issue of Persimmon Tree is a response to the reversal of Roe, to the trend toward reversing years of slow progress toward equality that decision seems to portend, and to the continuing second-class status to which so many women in this country and around the world are still relegated.

You will find articles here describing the painful challenges women have faced, and continue to endure. You will also find reflections of optimism and determination to continue the struggle for equality and self-determination, no matter the challenges — as in the inspiring lead essay by Alice Benson, “Hope and Persistence”; the work of the fourteen poets who contributed to this issue; and the words of the readers whose eloquent thoughts and moving  experiences you will find in the Persimmon Tree Forum  In the Resources section you will find information about organizations that are working to support women’s rights — as well as leads to informative books and articles. Knowledge truly is power; action based on knowledge — as well as compassion and respect, even for those with whom we disagree — is more powerful still.

In this country, much will depend on the outcome of the midterm elections on November 8. My colleagues and I — as well as contributors to the Persimmon Tree Forum — urge you to vote, and to nag, cajole, and/or insist that all those in your circle do so as well. We also hope you will send us your thoughts in the aftermath of the elections. Email me at editor@persimmontree.org, with the subject line Forum Comment. And please sign not only your name but also your town and state.

Finally, and above all, we must fight discouragement, maintain hope, and do what we can to reverse the reversals of progress toward equality. Men do have their parts to play, of course. But I keep thinking of the title of a book that Eleanor Roosevelt wrote during the Great Depression: It’s Up to the Women. 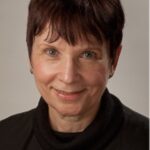 Margaret E. (Peggy) Wagner is Editor in Chief of Persimmon Tree. Her 35 years with the Publishing Office of the Library of Congress, first as writer/editor, later as managing editor, afforded her broad experience in all phases of print and online publishing. She led the project teams that produced some of the Library’s major reference works, and is also a published author herself. Peggy’s passions include wide reading and a deep appreciation for the power and importance of fiction, poetry, music, and the visual arts. 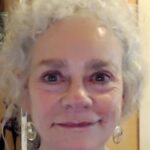 Joyce Hoffman, Ph.D. is an art historian and artist. She enjoys mixed media such as colored pencils, watercolors and ink. She also creates images within PhotoShop.

4 Comments on “Women’s Rights: The Challenges We Face”