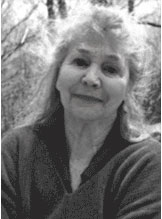 How Aunt Maud Took to Being a Woman
A long hill sloped down to Aunt Maud’s brick house.
You could climb an open stairway up the back
to a plank landing where she kept her crocks of wine.
I got sick on stolen angelfood cake and green wine
and slept in her feather bed for a week.
Nobody said a word. Aunt Maud just shifted
the bottles. Aunt’s closets were all cedar lined.
She used the same pattern for her house dresses—
thirty years. Plain ugly, closets full of them,
you could generally find a new one cut and laid
out on her sewing machine. She preserved,
she canned. Her jars climbed the basement walls.
She was a vengeful housekeeper. She kept the blinds
pulled down in the parlor. Nobody really walked
on her hardwood floors. You lived in the kitchen.
Uncle Cal spent a lot of time on the back porch
waiting to be let in.
(1987)
Periphery
You are not wanted.
I said to the older body
Who was listening near the cupboards
But outside on the porch
They were all eating.
The body dared not
Put its fingers in its mouth.
Behave, I whispered,
You have a wart on your cheek
And everyone knows you drink.
But that’s all right, I relented,
It isn’t generally known
How clever you are.
I know you aren’t appreciated.
The body hunted for something good to eat,
But the food had all been eaten by the others.
They laughed together carelessly outside the kitchen.
The body hid in the pantry near the refrigerator.
After a while it laughed, too.
It listened to all the jokes and it laughed.
(1987)
Curtains
Putting up new curtains, other
windows intrude.
As though it is that first winter in Cambridge
when you and I had just moved in.
Now cold borscht alone in a bare kitchen.

What does it mean if I say this years later?

Listen, last night
I am on a crying jag
with my landlord, Mr. Tempesta.
I sneaked in two cats.
He screams NO PETS! NO PETS!
I become my Aunt Virginia,
proud but weak in the head.
I remember Anna Magnani.
I throw a few books. I shout.
He wipes his eyes and opens his hands.
OK OK keep the dirty animals
but no nails in the walls.
We cry together.
I am so nervous, he says.

I want to dig you up and say, look,
it’s like the time, remember,
when I ran into our living room naked
to get rid of that fire inspector.

See what you miss by being dead?
(1987)
Floaters
Today, through black floaters,
because my right eye is under siege
by the best-intentioned surgeon with laser,
today is thinly veiled.
And the sky with its black floaters
seems half-blind, too;
the crows dipping over the town.

October’s brilliance is half gone from the avenues,
or lies on lawns and gutters;
and rain, the blessed curse
in dissolved frost, yields ropes of mirrors.
The cheap, chiming clock says almost ten.

Then why this happiness in muted things?
Some equation of time and space,
a slowed perception of the battered brain
strips back like leaves to unexpected glittering.
(2004)
The Ungrateful
When you deprive yourself, I said to my body,
whose face gets wrinkled? Yours or mine?
She was suffering apathy.
We sat on the porch, a glass of wine between us,
honeysuckle blotting up the sky.
Many objects are strewn
in the fashion of insane old women who
have blocked the doorways with chiffoniers.
In case of fire they will burn with their obsessions.
Trees have seeded themselves in all the flower beds,
a willful violence between the arteries;
entire barns of debris, boxes from flea markets,
nails, empty oil cans, broken hoses.
The strangle underground rages in white rooted pulp.
I am leaving you, says my body;
her black moles, eyes of skin,
looking in all directions.
She, for whom I sacrificed everything,
with whom I shared every indignity.
(1995)
The Mother’s Eyes
All morning when talking to their mother,
the grievance is the other sister;
the oldest, the middle or the youngest.
Between them their bored fingers scratch
the frost paintings on the window glass.
They rip the delicate
filigreed mountain passes, the streams
in the deep gorges. They crush the exquisite
crystals with their fingernails.
Sunlight filters through their scratches.
The mother leans down and puts her eyes to the window
and sees the transfigured world outside.
The snow has stopped burying the house, the road,
the small orchard. And in a miracle, even their voices,
the frail knives of their words on the bitter air,
cut little holes that the mother can see through.
(1995)
Male Gorillas
At the doughnut shop
twenty-three silver backs
are lined up at the bar,
sitting on the stools.
It’s morning coffee and trash day.
The waitress has a heavy feeling face
considerate with carmine lipstick.
She doesn’t brown my fries.
I have to stand at the counter
and insist on my order.
I take my cup of coffee to a small
inoffensive table along the wall.
At the counter the male chorus line
is lined up tight.
I look at their almost identical butts,
their buddy hunched shoulders,
the curve of their ancient spines.
They are methodically browsing
in their own territory.
This data goes into that vast
confused library, the female mind.
(1999)
At Eighty-three She Lives Alone
Enclosure, steam-heated; a trial casket.
You are here; your name on a postal box;
entrance into another place like vapor.
No one knows you. No one speaks to you.
All of their cocks stare down their pant legs
at the ground. Their cunts are blind.
They barely let you through the check-out line.
Have a nice day. Plastic or paper?

Are you origami? A paper folded swan,
like the ones you made when you were ten?
When you saw the constellations, lying
on your back in the wet grass,
the soapy pear blossoms drifting
and wasting, and those stars, the burned out ones
whose light was still coming in waves;
your body was too slight.
How could it hold such mass?
Still on your lips the taste of something.

All night you waited for morning, all morning
for afternoon, all afternoon for night;
and still the longing sings.
Oh, paper bird with folded wings.
(2002)
Mantra
When I am sad
I sing, remembering
the redwing blackbird’s clack.
Then I want no thing
except to turn time back
to what I had
before love made me sad.

When I forget to weep,
I hear the peeping tree toads
creeping up the bark.
Love lies asleep
and dreams that everything is in its golden net;
and I am caught there, too,
when I forget.
(2002)
Second-Hand Coat
I feel
in her pockets; she wore nice cotton gloves,
kept a handkerchief box, washed her undies,
ate at the Holiday Inn, had a basement freezer,
belonged to a bridge club.
I think when I wake in the morning
that I have turned into her.
She hangs in the hall downstairs,
a shadow with pulled threads.
I slip her over my arms, skin of a matron.
Where are you? I say to myself, to the orphaned body,
and her coat says,
Get your purse, have you got your keys?
(2002)
Next: Photography: Look at You Loving Me »
Home | Archive