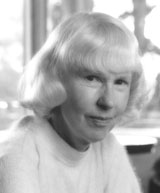 I met Carolyn Kizer thirty years ago, after I published my first volume of poetry,Summoned. She wrote me a note in elegant, angular script in which she asked questions like, “Who is this marvelous new poet? Why have I never heard of her?”

Terrified by this generous praise, certain I couldn’t live up to it, I didn’t answer.

But later, when we finally met, I apologized, saying something weak like, “Well, I meant to write to you.”

“Darling,” she said, “that letter was so aggressive no one could possibly have responded. Now let’s talk about your writing.”

Generous, overwhelming, assertive, controlling—Carolyn is an amazing friend. And at the same time a highly conscious and devoted poet. “No,” she said on one occasion when I implied that her friendship with a poet whose work she was reviewing might influence her judgment of the work, “No, I’m entirely pure when it comes to poetry. I judge on the basis of excellence. It makes no difference whether I like the person or not.”

I almost told her, “Well, maybe.” Carolyn was nothing if not emotive.
Carolyn’s rushing speech, her forward stance, her whole physical effect with arms extended and blond hair afloat (I used to say that she looked as if she came out of a Wagner opera, needing only the winged hat) would make you expect a poetry based on emotion.

But, no. There are two strong other sides to her.

First, she is intellectual and curious, with a compendious knowledge of history, art, folklore, philosophy. This Carolyn likes form, the more difficult and geometric the better.

And, secondly, she is a fast and able wit with a scary tongue. Her witticisms are delightful to listen to, as long as you aren’t the subject. (Example: the reader at an interminable poetry reading laid himself open by announcing that he “just couldn’t stop.” “Oh, yes, you can,” Carolyn called out from the audience, “Take a deep breath. STOP.”)

The famous poem “Pro Femina” is just such a Kizer burst of ire, but leavened with erudition and wit. It jostled the 1970s and became a feminist icon, with its cry of “While men have politely debated free will, we have howled for it.” At the same time, it is also emotive and asks the reader to join up and rebel: “the role of pastoral heroine / Is not permanent, Jack. We want to get back to the meeting.”

Carolyn strives for the right word. “No,” she would say to me, when I sought advice, “think further. No, not exactly right.”

But she is usually encouraging. “You’ll get it,” only occasionally bursting out, “Good God, no!”

With herself she is, as she advised, genuinely careful and exact.
I have three favorites among Carolyn’s poems. First, there’s “Parent’s Pantoum” (see Kizer’s poetry in this issue), whose unusual, strictly legislated form contrasts with a regretful subject matter: “So now we pout like children? Second childish?”

“Afternoon Happiness” (in this issue) is another poem whose wit wars with the romantic. “Of course it won’t last. You’ll break my heart / Or I yours, by dying.”

Finally, there’s the delicate and emotive “The Great Blue Heron” (in this issue.) This last is my all-time favorite. It’s a series of meditations on grief, a delicate elegy, turning on perceptions of loss. Loss is evoked in stanza one: “Shadow without a shadow,/ …whose ghost are you?” Loss becomes controlled and partly abated in stanza two—”her quick eye saw him drifting/ Over the highest pines”—to be finally realized in the third stanza with a wrenching traditional elegiac ending that implies ascension.

Carolyn Kizer’s poetry, as you’ll see, is as varied as the woman I’ve described.

To read her poems is an enlivening experience, like a visit with the poet.

Diana O'Hehir is the author of six books of poetry and several novels. Among her many honors are the Poetry Society of America's Di Castagnola Award and the Devins Award. Her most recent publications are Spells for Not Dying Again (poems) and Dark Aura (a mystery novel). Her website is http://www.dianaohehir.com.
Home | Archive | Issue: Spring 2008
Next: Nine Poems »