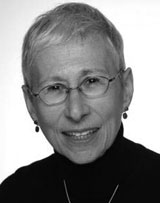 Several times a week I take four-year-old Penelope to daycare. I know the drill: trolley or bus, walk to the center and sign in, stow the lunchbox, pay attention to mittens, boots, hats, and transitional objects like My Little Pony with a long platinum mane. At day’s end, when I pick her up, the tape rolls in reverse: remember the lunchbox, the clothes and M.L. Pony, and keep track of the many colored sheets of paper sent home by the daycare staff.

On our way back and forth, we sometimes walk past the large statue of a dragon, an athletic team symbol named Mario the Magnificent.

“Princes save princesses from dragons,” she observes one morning when the sun glints on Mario’s bronze scales, “and then they get married.”

“What if a princess saved a prince?” I ask. She frowns. “Or if another prince saved the prince?”

She laughs. “The prince couldn’t marry a prince!”

After a moment, she wonders whether pink horses like M.L. Pony would suit two princes. “They might have to get another horse. Pink is for girls.”

Some evenings she is mine until bedtime, and we have a long chatty bath filled with many toys, cups and scoops, and marine creatures in deep colours. I’d forgotten that beyond their obvious meanings, like “pink is for girls,” colours have personalities. You can fall in love with a colour, lose yourself, absorb the colour or be absorbed into it.

Take red, for example. A fashion consultant (or your mother) will tell you that a little red goes a long way, you have to be careful how you “use” it: a deep red scarf can be a marvelous accent when everything else you are wearing is, say, black. But to Penelope red is like a person, it has moods and desires, and more is better than less. You can’t have too much red. She grinds the red crayon into the paper, deepening the colour by adding layers of crayon wax.

“This red wants to be here,” she will say, pushing the shiny colour across the outlines of a horse or doll or clown in her colouring book. “This red is hungry and it will eat up this other stuff.” She will sometimes eat red food, apples or little tomatoes. “How does red smell?” she asks one night, and we talk about red peppers and red flowers. “I know how purple smells,” she says with a nod. “It smells like a cat’s box.”

One of her favorite Barbies has a red dress, red shoes, a red purse and a red coat. The clothes are bold and sleazy. I hate the doll so much that I almost don’t notice it is clad in red. “Can’t you find a little love in your heart for Barbies, Grandma?” she asks with an angelic look.

When we bake cookies and make coloured icing, she is frustrated by the difficulty of getting a true red. The food-colouring red just makes pink, then deep rose, then magenta, then a dark red like arterial blood. When we add a few drops of yellow it brightens a bit, but then we add too much and get a tomatoey orange.
She has five favorite colours: red, purple, pink, blue, and yellow. She wears mostly purple clothes. Thank heavens children’s clothes come in purple these days. When her mother was four, it was hard to find interesting colours; little girls’ clothes were pink, yellow, or navy blue, or insipidly patterned with pastel flowers or checks. The only true colours turned up in plaids, and a person can get sick of plaids.

The world turns up colours that Penelope longs to capture, to charm, to get to know better. The sky can offer the most marvelous blue, especially when you find a ginkgo tree that has kept a furl of yellow-gold leaves to set it off. A puddle in the street or a soap bubble in the bath delivers rainbows, which is easy to think of as a single colour because there is no transition between the colours as they iridesce. Rainbow-coloured. But that’s not really fair.

When you enter yellow you walk into brilliance and lightness. A yellow patch can sometimes not be seen if you don’t lightly drag a darker crayon or a pencil around the edges of the patch. The edge looks continuous with the paper and then suddenly you’re in the middle of a blaze, an eruption of warmth and intensity like the yellow in Matthias Grunewald’s painting of the resurrection that haloes the risen Christ.

“Red, yellow, and blue are the primary colours,” she announces one night.

“Do you know what that means?” She is silent. “It means that you can make all the other colours out of them. The other colours like green and orange and purple are secondary, because they are combinations of those primary colours.”

“But you can’t make them. They made themselves.”

“How do you make pink?” So we talk for a few minutes about tints and shades of light and dark.

“Blue is angry,” she announces one night in the bath. “It wants to be more like red.”

“If blue were more like red, it would be purple.”

“Then it wouldn’t be blue any more. It wants to be blue, but more like red.”

“Well—it wants to be on the traffic lights. Red means stop.”

“What would blue mean?”

“Blue …blue could mean, everybody is not telling the truth.”

Her hair is brown and her skin glows in the bathroom light like a precious shell. She is playing with an exfoliant strip of acrylic crepe dyed a deep aquamarine, dipping it into her clear bathwater and sucking the water from the ends.

“How about you? Are you telling me the truth?”

“I’m not blue.” She laughs and tells me to close the shower curtains on her. I do, and then I hear her talking to blue in a low and loving murmur. “You see, darling, it’s like this,” she explains. “You can’t be on a traffic light because—” and then I don’t hear her any more.

Martha Roth is the author of Goodness, a novel, and Arousal: Bodies & Pleasures, an essay-memoir, and the co-editor of two anthologies, Transforming a Rape Culture and Mother Journeys: Feminists Write about Mothering. She has always enjoyed collaborative work and was an editor of Hurricane Alice: A Feminist Quarterly. These days she lives in Vancouver B.C. and collaborates at long distance with her three granddaughters, Elinor, Grey, and Claudia. Her website is http://www.martharoth.com.
Home | Archive | Issue: Spring 2008
Next: Going Back »