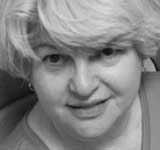 The Artistry of Mayumi Oda: Images of the Floating World

My first impression of Japanese silk screen artist Mayumi Oda was that of a naughty girl. It was in 1983 in the meditation hall, or Zendo, at Green Gulch Farm Zen Center in Muir Beach, California, and I was there exploring American Buddhism as a possible spiritual path. At some point I noticed a petite Japanese woman with black hair flowing waist-length down her back, sitting amidst the monochromatic throng in one of the most vividly brilliant hand-knit sweaters I’d ever seen. It had large, puffy sleeves and vibrant multi-colored stripes, and she wore it as a coat. I thought she must be confused about the instruction we had all received that asked us to wear somber tones in the Zendo. To my surprise, she began to weave her way through the crowd of people toward the front of the hall that Sunday morning and made the community announcements. What Mayumi modeled for all of us then, and what her art models for many now, is liberation.

Mayumi Oda was born in Tokyo, Japan, in June of 1941. She remembers hiding in the backyard bomb shelter built by her grandfather and father, a Zen scholar and teacher, while American planes flew overhead. When she was four years old, she went with her mother and brother to live in the north with their aunt. It was there that she found the first extended period of peace in her young life. She was introduced to the bountiful world of horsetails and wild chives at the river bank, and her artistic mother showed her how to draw mountains, “first drawing the outline with brown, then filling the space with many trees of light and dark green. She told us to look at the mountain carefully as we drew.”

Encouraged by her mother, she joined the high school art club, where she was allowed to draw live models, and she eventually attended the Tokyo University of Art, where she majored in fabric dye and design. Academic programs in Japan and China were extremely traditional in the 1950s; they followed an apprenticeship model designed around the replication of the work of old masters. In order to feel some creative relief, she roamed the halls that connected the University to the National Museum, where she could study screen paintings, lacquerware, and the fabric design brocaded onto theatrical Noh theater costumes. “The main thing I learned at University,” she says, “was to love the freedom and boldness of Japanese design.”

After graduating in 1966, Mayumi moved to New York City with her husband, an American student she had met in Japan. Trying to understand herself as an artist, she interacted with many notables of the time, including Allen Ginsberg, Timothy Leary, Rothko, and de Kooning She embraced psychedelic light shows, the women’s liberation movement, and entered into a painful process of self discovery. She asked herself, “What is my art?” Although she told herself “I am small, I am Japanese,” she remembered being “born angry” and was not willing to shut herself off from the world unfolding before her.

It was while giving birth to her first son in 1967 that Mayumi began to look at her own changing body and her past training as a fabric artist. Here she found a way to define herself. She began etching in black, and strong female images—very much fertility figures—began to appear. She developed a simple silk screen technique, using a combination of water-based glue and oil-based pencil. This provided the layering effect that enabled her to replicate the Japanese woodblock print style of the artistic tradition known as ukiyo-e. Printing on Japanese mulberry paper with its inherent fibers gave a wood-like texture to her bold new images. [Image 1: Woman Calendar (September Afternoon), 1971]

Ukiyo-e had a major impact on Mayumi. The word “ukiyo” is a religious word, carrying strong Buddhist overtones: the sad, floating, evanescent, grief-stricken world. The ending “-e” means picture. The phrase acquired artistic meaning when it was attached to the style of woodblock prints so popular in Japan from the 15th-19th centuries. This thriving industry was in large part driven by the desire of the rising middle class to view an art form that reflected festive nature motifs, the enjoyments found in everyday life, and above all, the courtesans of the Yoshiwara pleasure quarter and the actors of the Kabuki theater.

We see Mayumi’s genius in her embrace of the traditional while making it her own. She uses the experience of creating her art as a way of transforming herself. She isn’t just looking back at her early training but at herself, at her life, and showing us how she is embracing new versions of herself.

Initially in her career, she created prints that are lovely yet very ethereal, particularly disembodied. [Image 2: Woman Calendar (Time), 1971.] Her use of line is striking, and there is evidence of traditional motifs such as chrysanthemums and the well-known cloud image often used to signify the passage of time.

She begins to revisit the hallowed grounds of her culture. Her most moving tribute to the courtesans of the Yoshiwara is found in her Storyville series, inspired by a group of photographs taken by E.J. Bellocq in the early 1900s of prostitutes in the infamous Storyville red-light district of New Orleans. [Image 3: Storyville I,1974.] The very Japanese, almost mask-like face, tiny hands, and arms are common to Japanese art; the skin is shown as slightly whitened as befitted a courtesan. But Mayumi is celebrating these women, honoring them. They are full-bodied, relaxed, contemplating their lives. They are elegant and know it. [Image 4: Storyville IV, 1974.] It was this exhibit that brought her critical acclaim from around the world. The Boston Herald and Cleveland Plain Dealer embraced her as “the Japanese Matisse” for her mastery of unexpected coloring and rearranged perspective.

Eventually she reinvisions traditional Buddhist icons, the male Bodhisattvas of her youth, and transforms them into vibrant female images of wisdom and power. Her use of multiple layers of color is stunning. She exposes her wicked sense of humor by showing Samantabhadra, shining practice Bodhisattva, on a bicycle (considered a vehicle of liberation by women at the time of its invention) with a miniature elephant as a companion rather than a traditional beast of burden. [Image 5: Samantabhadra (On a Bicycle), 1980.] Her perfect wisdom Bodhisattva Manjusri is, likewise, on a bicycle celebrating the sutras, or scriptures, by thrusting them exuberantly overhead as her faithful lion companion runs alongside. [Image 6: Manjusri (On a Bicycle), 1980.] These are vital, modern goddesses. “Working there in the basement,” she later wrote, “I felt that I had reclaimed myself.”

Soon Mayumi’s art was embraced by a new generation of Western women practicing Buddhism in the West. Her images became more defined and adventurous, showing the female in a more complex iconography that speaks of self-affirmation and spiritual embodiment. Her goddesses fly on the backs of birds, surf on giant waves, ride fierce dragons, and flare as Dakini sky dancers. “It was as if a sun inside me had finally broken through the cloud,” she has said. “Goddesses became my theme, and silk-screen prints of goddesses seemed to create themselves.” [Image 7: Goddess Give Us the Strength to Cut Through, 1983.]

In the late 1970s, Mayumi’s life was changing. She divorced her husband and moved down the road from Green Gulch Farm Zen Center in Northern California. The Buddhist teachings she had grown up with began to take root in her everyday life. The fields cultivated so diligently by Zen students provided the images of nature that had so inspired her in art school. [Image 8: Green Gulch Seed Catalog: Purple Cabbage,1980.]

She could often be found in the middle of the masses of fields at Green Gulch, easel set up, painting in the early morning. “The cabbage and lettuce spread their leaves, revealing mandalas of the field,” she’s written. “Under the fog, the bright green lettuce leaves looked more beautiful than roses and peonies. My heart still pounds with the mystery of this blossoming out of wet black soil. My favorite vegetable was the purple cabbage …the magenta core curled so tightly it reminded me of my own lonely heart. Even when I felt despair and sadness in those early days, painting the unfolding shapes of these vegetables gave me strength.” [Image 9: My Garden 1981.]

Mayumi’s artistic vision eventually led to years of political activism. This included founding Plutonium Free Future in the early 1990s, an organization established to stop the shipping of reprocessed plutonium from France to Japan. With a sizeable membership and some grants from the Rockefeller Foundation, it helped to create awareness of the issue on an international scale. Her more recent activism includes coordination of the World Court Project, an effort to declare nuclear weapons illegal, and helping to establish a women’s refuge center in Phnom Penh, Cambodia.

Today Mayumi lives in Hawaii, where she has established a retreat center and programming for women. She continues to create art that is at once a refuge, but she also asks us to confront ourselves and do our own inner work. She knows who she is and the purposes her art serves. She asks us to appreciate the female body and all of its attributes, dark and light, and then claim it, embody it, recognize its divinity. And then she asks that we understand that our body is the very body of the earth, and that we are inextricably linked to the planet and the work to preserve it. [Image 10: Coral Diver, 1985.]

Lane Olson received a graduate degree in Asian Studies and taught in the religion and art history departments of Dominican University in San Rafael, California, for five years. She currently lives in Sonoma County, CA, and works at Sonoma State University. In the 1980s, she helped organize a group of Bay Area women to launch three of the first international conferences on women and Buddhist practice. She currently organizes Buddhist meditation sittings and other workshops for women in Sonoma and Marin Counties.
Home | Archive | Issue: Spring 2008
Next: Ten Images »