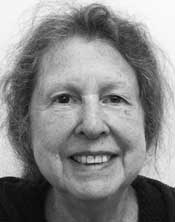 I like to listen to Books-on-CD when I knit or stitch. A couple of weeks ago I found a copy of Nora Ephron’s I Remember Nothing (2011) read by the author in her sharp, slightly sarcastic voice. As I worked on a sweater (designed by my soon-to-be-seven year old grandson—black with a red lightning bolt in the center), I kept thinking about Nora and how kind and helpful she had been to me. I first met her in Almeria, Spain, on a shoot for the film Doc. We were both tagalongs—our then husbands had work to do there—and we hung out during the day. One afternoon she took me and my three-year-old daughter, Jennifer, to a shoe store and made me buy her a pair of cowboy boots. Jen wore those boots when we went to her interview for pre-K at a selective private school back in the city. She was admitted on the spot and I credit those boots.

Some years later I was teaching history at another private school and had been assigned to plan Wednesday assemblies. Looking for ideas, chatting with other teachers about possibilities, I said, “I might be able to get Carl Bernstein to speak.” How did I know Carl Bernstein? “Oh,” said I, “he is married to Nora Ephron and I know Nora.” “You know Nora Ephron!?! Then get Nora Ephron.”

I called Nora; she readily agreed and gave a charming talk about becoming a journalist. She began with a story that went something like this:

I took a journalism class in high school. The second week the teacher gave us some news to write up: the following Thursday, the principal, the vice-principal and 50 teachers would be going to Sacramento to lobby the California legislature about a pending bill. We dutifully wrote a reverse-pyramid first paragraph. The teacher dismissed all our efforts, then gave us perhaps the most important lesson in writing I ever had. The lede, he said, is: “No School on Thursday.”

When planning the assembly,  I had missed the lede.

With the Spring issue, the lede for this Editor’s Page is, The East Coast team has completed a year of running Persimmon Tree (helped by Nan Gefen and Marcia Freedman). We give you some powerful fiction this time as well as funny and/or inspiring non-fiction, including a tribute to the late feminist historian Gerda Lerner by scholar Kathryn Kish Sklar. As for the art, well, trust me, you have to see it to believe it.

As a final treat, our former poetry editor, Chana Bloch, suggested that Wendy Barker’s poems should be featured as a way of properly introducing her. We have done just that—and paired her poetry with a loving introduction by Alicia Ostriker.

For 45 years, Sue Leonard taught every variety of history except American mostly at independent high schools for girls — with a brief stint in a poverty program school for pregnant teens in Bedford Stuyvesant. In the mid-nineties she and her late husband John Leonard were co-editors of the Books and Arts section of the Nation Magazine. Once retired, Sue filled up her days with reading, needlework, family, friends and long walks.
Next: Eleven Poems »
Home | Archive

One thought on “Editor’s Page”