Okay, so what if we’re old? Is that such a crime?

No, there’s no crime in getting old. I’m just saying being old is a sad state of affairs. For one thing, we can’t sleep worth a damn. I’m just so tired of being up all night. Aren’t you?

She interrupted herself to concentrate on sitting up; she poked her foot at her slipper; on the fourth try she got it on and hefted her heavy body off the couch. Bending forward at the waist, her belly pressing out the buttons of her pajamas, she crossed the room to the hot plate and heated up some tomato soup. She sat at the table to eat it out of the pan and continue the conversation.

No, there’s no crime in getting old. The crime is in living through it.

She put the empty pan in the sink and returned to the couch. Picking up the remote, she put the movie on mute and tucked herself under a nubby beige bedspread, leaving her slippers on and her feet sticking out over the edge of the couch. She reached up and turned off the light.

So. Here we are again.

She closed her eyes and nestled the back of her head into the pillow.

Okay. Where shall we start?

Start with number one. That college boy.

Drifting back, she found big suntanned hands, a glistening wristwatch. A plaid shirt, red and white and green, khakis coming unzipped, the softest lips. She was sixteen years old, working in her father’s drugstore in Lawrence, a college town, in 1952. He came in to buy soap. He had the gift of gab and a thick shock of blond hair and she had her father’s truck. Sitting on a blanket in a field one spring night, her smooth white leg stretched out from the little pleated skirt. No shoe on her foot. Oh, oh, oh. She sighed and diddled her fingers against the bedspread. A happiness.

He was number one.

She brought her new skills back to high school. Two, three, and four skipped past in a blur: a white pudgy tummy and wet hands; a yellow wool sweater that made her nose itch; freckles on a football player’s hairless chest. Oh, oh, oh. And then number five, a snotty younger boy who made fun of her by acting like it was him who got her to do it. Oh.

The game was to remember as many as possible, to count as high as possible. But really the game was to pretend to want to stay awake, counting and remembering, and then to lose the fight and give up into elusive fields of sleep.

She was getting there. Six, seven, and eight waved past beneath twitching eyelids: a campus radical with a beaky nose and bad breath; an older man who came through town every few months in his sixteen-wheeler, who kicked his feet. A funny skinny boy who told a knock-knock joke in the middle of it. Who’s there? She gasped. A little old lady, he said, one thrust for each word. She knew the joke and attempted a yodel, and they both fell apart laughing.

Her breath deepened and she went back to the count. Ten, he was that blind date. But she was bored with the game and they got all out of order after that and started shuffling themselves like cards, jacks and kings of diamonds and hearts. Jack of the backseat of a new 1962 Oldsmobile. Jack of a screened-in sun porch in a closed-up summer cabin on a lake in October. Eleven, twelve? Thirteen.

She decided to focus on the kings of hearts, the ones who meant something. That would be number one – Bill or Will? – because he was her first, and it was so truly nice, the blanket, the night wind, the stars. She supposed there were stars but didn’t really remember that.

Maybe she should count Ron as a king. They were together for two years. They were supposed to get married, and when he ran off to Colorado she wasn’t getting any younger.

But really it was a good thing because on the rebound she met number sixteen, the boy she did marry. The old woman’s jaw slacked open and her flesh softened along the back of her body. Tommy, on leave from Fort Riley, and her sweet friendship with a soldier over five days, before he left for Vietnam. Then two years of letters and waiting. She didn’t really wait – she briefly knew numbers seventeen through twenty-three or so, but they weren’t kings of hearts. She wrote the letters to Tommy and was glad to do so. Then he came back and they married and he was her king of hearts. She was his queen. He did very well in John Deere sales, and there were diamonds, too.

After that there were a few others, every one a jack. Until to her great surprise she met the queen of hearts. Who could have known there would be one whose shadowed eyes would talk to hers, when she didn’t even plan to be listening?

Oh, a happiness. Janet, my love. Tommy, my dear husband, my love. Bill, or Will. Oh, oh, oh. Counting blessings.

She shivered and wiped her eye, then tucked her hand under the cover.

Are we asleep now? 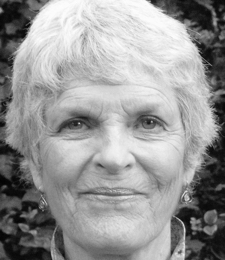 Author’s Comment: Inspiration for this story was a fat old neighbor of mine who had lived a long and salty life. I saw how such a life could shrink to a can of soup in a small room, without bitterness or fear but simply with whatever mental tricks get you through another unsleeping night. Imagination gave me the rest of the story.

Judith Day grew up in St. Louis and for thirty years has lived with her husband near the northern California coast. She is a psychotherapist and meditation teacher. Writing and reading fiction have always kept her going. Her stories recently appeared in Canyon Voices and Behind the Yellow Wallpaper, an anthology of women and madness. She is working on a novella about three people who lived through war.