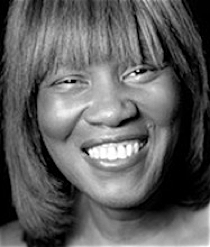 Listening at the Door

Beneath the door, I could practically see
the wretched slither of tobacco and English Leather.
Hiding on the other side, I heard Mama giggle
through clenched teeth, which meant potential
husband sitting spitshined on our corduroy couch.
The needle hit that first groove and I wondered
why my mama had chosen the blues,
wrong, Friday-angled, when it was hope
she needed. I pressed my ear against the door,
heard dual damp panting, the Murphy bed squeal,
the occasional directive,
the sexless clink of jelly jar glasses.

What drove me to listen on those nights
when my mother let that fragrant man in,
banished me to the back of the apartment,
pretended she could shine above hurting?
I’d rest my ear against the cool wood all night
as she flipped through the 45s—
looking for Ray Charles, Stevie Wonder,
somebody blind this time,
somebody crawling on his knees toward love.


The End of a Marriage

is totally silent, eerie in its zero.
Not even the clunk of paralleled possessions
dropping into cardboard boxes or the satisfying
slamming of doors, one after another, can slap
a period on chaos. It’s just one syrupy moon-eyed
gaze, taking in his overlapped belly, the dangerous
mole dotting her left shoulder, the blue veins
like roads to death behind his knees. It’s that watery
stare with no stop, the frenzied gulping of line,
curve, voice, all the stark unbended was of them.

Yes, we flinched against the losing, even our venom
was distinctly hued. Everyone kept asking, begging
detail, but all there was was the utter nothing, just
our eyes locked on our eyes, traversing that ragged
territory once more for the record, finally dropping
abruptly from the edge of my body, the edge of his.
It was a threadbare connect meant to end tragically,
one that was broken when we blinked and he turned
away and I turned away, our eyes fused open.
Then we began our walk toward separate sounds.

He was that third drink she shouldn’t have had,
a hammer moving down hard on her eyes.
He was the way fragrance moves in an empty room,
the hard stone that wouldn’t stop prying at her closed eyes,
breaking her slumber into questions.
He was cyanide glistening in a china tea cup.
He was the pin prick hurting
that stiffens the hands after bullets of rain.

He was the bitch of moons, bright with disdain,
the sky’s stuttering at twilight,
the nasty way neon winks at the lonely.

And she saw him clearly,
studied the lines of his face,
as she tumbled like an eager dancer
into the cave of his arms.
He was that third drink. She should have said no.

Now each time she grows thirsty,
he watches.

Fixing on the Next Star

Between 1916 and 1970, more than half a million African-Americans
left the South and migrated to Chicago.

Mamas go quietly crazy, dizzied by the possibilities
of a kitchen, patiently plucking hairs from the skin
of supper. Swinging children from thick forearms,
they hum stanzas riddled with Alabama hue and promises
Jesus may have made. Homes swerve on foundations
while, inside, the women wash stems and shreds of syrup
from their palms and practice contented smiles,
remembering that it’s a sin to damn this ritual or foul
the heat-sparkled air with any language less than prayer.

And they wait for their loves, men of marbled shoulders
and exploded nails, their faces grizzled landscapes
of scar and descent. These men stain every room
they enter, drag with them a stench of souring iron.
The dulled wives narrow their eyes, busy themselves
with clanging and stir, then feed the sweating
soldiers whole feasts built upon okra and the peppered
necks of chickens. After the steam dies, chewing
is all there is—the slurp of spiced oil, the crunch
of bone, suck of marrow. And then the conversation,
which never changes, even over the children’s squeals:
They say it’s better up there, it begins, and it is always
the woman who says this, and the man lowers his head
to the table and feels the day collapse beneath his shirt.

It is a backbreaker delivery, with no knife
slipped beneath the bed to cut the pain.
In a deep-bleached cavern of beeping
machines and sterilized silver, she can’t
get loose. Her legs are strapped flat,
and men are holding down her hands.
She wails. Not from hurt, but from knowing.
There will be no running from this.
This child is a chaos she must name.

Minus One, Minus One More

Carol Burnett tugs an ear, waves toodly-doo to the camera eye.
It’s ten o’clock, and a white mechanized man asked if I, a child,
know where my children are. No, but it’s time for the news, time
for the insisting war, and the preposterous Philco—half monster
TV screen, half bulky, functional phonograph—blares jungle, its
flat glass face filled with streaked pans of crushed foliage, the whir
of blades, dust-dreary GIs heaving through quick-slamming throats.
Lurching toward the ledges of copters, they screech commands,
instructions, prayers, struggle to cram blooded lumps back into
their uniforms—dead there, there, let’s see, almost dead over there—
a hand dangling by tendrils, a left eye imploded, black-and-white
red etches slow roadways into the back of a dimming hand. Beneath
the lack of hue, a white buzz, a lazy scroll of dates and numbers:
This is how many gone today, how many last week, last month,
this year. Big Daddy Cronkite’s eyes glaze, consider closing, refocus.

Think of all the children plopped in front of this unscripted boom
to pass the time. Think of Tom turning Jerry’s head into spectacular
dust, then this, our first official war smashing into the family room,
blurring into cinema, into lesson. It’s how we learned to subtract.

First of all, y’all fools. See what’s right in front of you,
then got folks telling you you ain’t seeing what you
just saw, other folks saying you saw more than you did.
Heaven is where my Jesus live. Just one way to get there,
no great big shiny ship can rise up on that sacred. They think
they gon’ look the Lord dead in his eye, asking questions
with nerve enough to wait for answers? No man gon’ reach
down, just scoop up moon, even if Mr. Cronkite say he did.
Them white men way out in a desert somewhere, stumbling
round in them blowed-up suits with movie stuff back a’ them,
laughing inside those glass heads. And colored folks aahing
and oohing like number’s in and they got money comin.’
Chile, I sho’ didn’t raise you to be this much fool this fast.
People got to pray they way up. One small step ain’t enough.

Look at ‘Em Go
for my granddaughter Mikaila

Hard-sewn, soft-belly, huff, hip-swing,
teeny woman catapult, dings in the walls
of your body. I know your scars, badges
earned in the grave pursuit of science—
jump rope whips along a curve of calf,
toes stubbed purple, tender uncolored
patches of skin woven shut over your
small traumas. Wily dervish, you flip,
hurtle, fly, daily rattle your soft spine,
send your bones to the wailing places.
This is play in the age of Grandma, who
knocked those buildings down? This is
8 years old in the age of could-die-soon.
This is life as collision and scrape, hard
lessons in the poetics of risk. Daring
the world to harm us, you pull hard
on my hand. Grandma, let’s run! We laugh
and trip as the sidewalk sniffs our skin
and stars along our path flame shut.
Die fast, die slow, die giggling, die anyway.
Our speed tempts the Reaper as I shelter
you in this first death, the loss of our throats.

The difference in a given name. What the calling,
the hard K, does to the steel of me,
how suddenly and surely it grants me
pulse, petulance. Now I can do

my own choking. I can thread my fingers
with grimace and spit

zephyr, a gentle marking
of the very first time I felt

that crisp, bladed noun
in my own mouth.

Man on the TV Say

Go. He say it simple, gray eyes straight on and watered,
he say it in that machine throat they got.
On the wall behind him, there’s a moving picture
of the sky dripping something worse than rain.
Go, he say. Pick up y’all black asses and run.
Leave your house with its splinters and pocked roof,
leave the pork chops drifting in grease and onion,
leave the whining dog, your one good watch,
that purple church hat, the mirrors.
Go. Uh-huh. Like our bodies got wheels and gas,
like at the end of that running there’s an open door
with dry and song inside. He act like we supposed
to wrap ourselves in picture frames, shadow boxes,
and bathroom rugs, then walk the freeway, racing
the water. Get on out. Can’t he see that our bodies
are just our bodies, tied to what we know?
Go. So we’ll go. Cause the man say it strong now,
mad like God pointing the way outta Paradise.
Even he got to know our favorite ritual is root,
and that none of us done ever known a horizon,
especially one that cools our dumb running,
whispering urge and constant: This way. Over here.

Won’t Be But a Minute

Tie Luther B to that cypress. He gon’ be all right.
That dog done been rained on before,
he done been here a day or two by hisself before,
and we sho’ can’t take him. Just leave him
some of that Alpo and plenty of water.
Bowls and bowls of water.
We gon’ be back home soon this thing pass over.
Luther B gon’ watch the place while we gone.
You heard the man—he said Go—and you know
white folks don’t warn us ’bout nothing unless
they scared too. We gon’ just wait this storm out.
Then we come on back home. Get our dog.

Everything crawls—the green-black walls
move slow like prayer. The floor rocks
with all that’s left living—leggy
scuttering, vermin, lumpy rain.
Everything floats dizzy samba,
weaving obstacles and channels,
and sometimes rats ride. This is home.
This is home as funk, churning moss
dripping from its arms, arms open
wide to take in my damp body.
Everything crawls. The drooped ceiling
crawls toward the floor, the light hard-crawls
through soft splintered slats. And I crawl
through upturned rooms, humming gospel,
closing tired eyes against my home’s
languid rhythms of rot, begging
my new history to hold still.

“Fixing On the Next Star,” “June 25, 1955,” “Minus One, Minus One More,” and “Ain’t But One Way Heaven Makes Sense” from Shoulda Been Jimi Savannah,” Coffee House Press, 2012.
Next: Introduction to Patricia Smith’s Poetry »
Home | Archive

11 thoughts on “A Dozen Poems”