Shocking. I am suddenly my age, 77. Great god! I shaved off my short punkish hair in a fit of angst and depletion a few months ago. My head is a fuzz of white – striking actually.

Who is this person in the mirror? My new ocular implants show me wrinkles that the soft focus of cataracts hid. Those brown blotches? Do they define me? I think so. I bought expensive makeup in my twenties and thirties for fashion; now I buy compact foundation and pink blush from Rite-Aid. When I feel rotten, I gussy up the outside, go out looking swell. It works … mostly.

I have been wondering about this aging business for some time, this idea that we are destined to fall down a slippery slope and become less than we were. I don’t believe this linear perspective. Think about it. Time is motion; time travels. Nothing in the cosmos is linear; it is all motion and spirals. Stars travel at the speed of light and bend in different directions. Or the electron whizzing around a nucleus in one of my pelvic atoms is unpredictable. Time travel.

I’ve been age traveling off and on most of my life. As a young woman I traveled around the nucleus of my life quite sure I had the vision set square. I was quite sure how everything looked, big and cosmic, all this knowing and motion. Love popped in every now and then, like a radiant sun in my orbit heating up the grass. Sometimes it was a man, sometimes an idea, sometimes even some great goal for my life. Love is like that, blossoming almost anywhere.

As it happened, my life, like the electron, was quite unpredictable, more than I ever wanted it to be. I first really took notice of the phenomenon in my mid-forties. I had this cataclysmic standup stroke in an airport and instantly lost most of the words I had. Well, they were in there; I just couldn’t get them out. With that, everything collapsed into the moment. I suddenly stood outside of time.

There was a big black box in my head that had all my words inside. There was no door to get in, no telephone cables or Wi-Fi to communicate out. I had my thoughts; they were sensations, ideas. I thought they were words but they wouldn’t cohere into sentences that I could speak. I understood the world around me with few words to tell it, a wrestling match to say the tiniest thing.

The amazing thing is that my crusty 80-year-old mother became my buddy. She wasn’t your soft cuddly understanding mother; she was usually all barbs. It really peeved her that death was stalking me – okay for her but not me.

My mother softened with this shift in our relationship, phoned me every other day. She told me the little ugly setbacks that no one has the courage to talk about: the ardors of getting up in the morning, the difficulty of the smallest things – making breakfast, raking leaves. There was radiance there, an amazing gracefulness. She spoke her infirmities to me.

I got on better when I thought of myself as an old woman. I was 80 and 44 and could feel life gently walking my bones. Death walked there too. A friend disapproved. “Don’t call yourself handicapped!” My god! How else could I think of myself? No way around it. I had to settle into this new reality, make a soft, safe cocoon around myself to hold the fragility of my space in the world. Nothing for it but to live through the stroke, the losses, and see what would come next. Being two ages preserved the vitality in me. My mother’s courage to be calm and resolute in her aging moved me, even her way of crusty ragging at the world. After she retired she became a war tax refuser; little woman in her white polyester suit went all the way to the highest tax court. They had no jurisdiction, they said, over war. Plucky courage, that woman.

She gave me her underbelly, qualities of steadfastness, calm in her daily adversities. I traveled for a long time in my mother’s perspective. I saw through her eyes. I felt through her body so lived better in my own beleaguered body and fractured brain. Death held us together in its heart. We never spoke of it that way, but there it was in a kind of sweetness and love, no fear.

In the long decades of recovery, sentence-by-sentence, moment-to-moment, I was no age – well, many ages. I was neither old nor young. Balancing right-brain creativity with verbal left-brain stress, I became an artist, a painter.

Who would have thought? Painting and drawing took me out of a linear, verbal mind and into sensory visions, savoring the look of the world around me and inside me. I did what I came to love, became what I love in spite of myself. I was no artist but in deep pleasure and persistence I could become almost anything, do almost anything.

My two best art teachers did not teach technique, did not show me great masters, though I did that for myself in the museums of the world. They pointed me to my own way of seeing; “Do it your way. See what you see.” Here is something for you, but develop your own way with the paper, your own way with the paint. I was no age, between here and there, I thought. But I actually was starting over, learning to see freshly, the way young children do.

I used to imagine death as somewhere else, a distant future. When I lost language, death slammed me hard but did not take my life. Death walked with me then. She became an ally, not a fear. Tibetan belief says death walks with everyone from the very beginning of life. Biology says cells are dying and being born in my body every second of my life, no matter what I think as an enduring self.

I have an image of dancing on a tightrope across a dark space, but the rope is brilliantly lit. I am swaying lightly between the vitality of living and the fertility of deathing

My art expanded during the more difficult times; new handicaps brought new challenges. I made art with them. I moved into a different sphere of time travel – an in-between – quietly cultivating both living and dying. With little thought I fabricated a large, beautiful mosaic to someone else’s design. I learned cautiously and carefully bits of the digital technology to layer my x-rayed cerebral arteries into self-portraits. I was a reckless teenager again, looking for a self in the devastation and the art.

New countries of self, new visions, new ways of living in a difficult brain. I was awash in quiet excitement, astonished anxiety. For the first time in my 20th-century life, I learned to live in my body. I found teachers to show me ways of a mind thinking as a body: Nia, karate, yoga, mysticism. My body thought as sensory, informative, bountiful, setting the linear and conceptual mind to the wings of the stage.

Then one year in my seventies, all of that sensory venturing opened up my brain again. My mind gave my thoughts a delicious fluency of words. I was no longer constrained by the black box. I could think my thoughts in easily moving words. Unbelievable newness.

I skipped back decades of my age in a riot of pleasure, returned to that point of departure in the airport when I lost so much of language. I started over… I could be in my forties again … only better.

I came alive, vital, sexy. I became visible in words again. I could tell the story of what it was like there inside to have so few words. I remembered everything in sensory visual memory, etched in my body as though waiting for words. To lose so much, gain so much traveling up and down mountains of unexpressed experience, hearing, seeing, tasting, painting, drawing the layers of life around me, uncluttering belief, deconstructing idea. Each word became precious, each deeply important.

My brains are giving me difficulties again. I feel ravaged now, so little mental stamina to push the edges as I have before, to find creativity again somewhere in the brokenness.

Today my brains are blah, waiting for the doctors to again find a fix. They will do. While I wait, I sit under the canopy of redwoods, firs, tulip and dogwood trees clustering my home. My eyes spiral green mountains, the brown meadow grass across the valley. I see tiny hummers circling above my roof, watch the mist hanging among the trees in the morning. There, linear time is nothing. Dawn spirals to dusk, the full moon falls on my pillow and dawn light comes around again, with the dog at my feet. It is new again, a spiral, different each time.

The surge of vitality feels eclipsed now. I am grumpy; my body and brain feel awful and affect everything. I’m actually not waiting for the doctors to fix something, though they will. What I am searching for is the essential voice in me that has asked – again and again – to draw upon renewal – yet again … no matter what.

No, I am not done yet. I can time travel in this life, mine the life force, vitalities, reap the qualities I need. The unruly challenges in my life made spiraling around time rich and luscious. The drumming of an inevitable linear pace isn’t mine.

The electron is unpredictable, but wherever it is, its presence gives shape and definition to its nucleus. The nucleus holds the potency for the electron, the possibilities for the electron’s unexpected motion. I can give shape to uncertainty again, cycle possibility again, revive vitality. Time cycled me forward, backward, around many ages. The unexpected motion gave shape to my center, my places of vision that I would not ever have dreamed in a linear life. 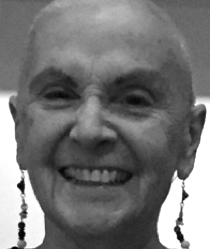 Author’s Comment: Writing this piece a few years ago I wanted to reflect on a mystery. I had made my life vital and creative despite the horror of losing expressive language. My view of my age after that was, well, wacky. And I wondered if that had something to do the utter beauty of sensory experience that became so luscious to me. How I think of age and what I can do was utterly changed. There are fewer fixes now to a very old radical brain surgery that saved my life decades ago. So I am consciously clearing the decks in the ebbing time of my life. I am living even more in sensory experience – in my body as a great knower and in the very savory world around me.
Ruth Codier Resch lives in Ashland, OR, with her beautiful white standard poodle service dog – her buddy and boss. She is the author of Without Utterance: Tales From the Other Side of Language, poet, painter and digital printmaker, all transpiring in her life because she lost expressive language in her forties in a stroke and found new ways to live, recover and discover creativity. She recently retired as a clinical psychologist and began a new career as a Neuro-Recovery Coach – advising others on how to live well and gracefully despite limitations like aphasia, stroke, Parkinson's and MS. You can find her at www.ruthresch.com and www.withoututterance.com